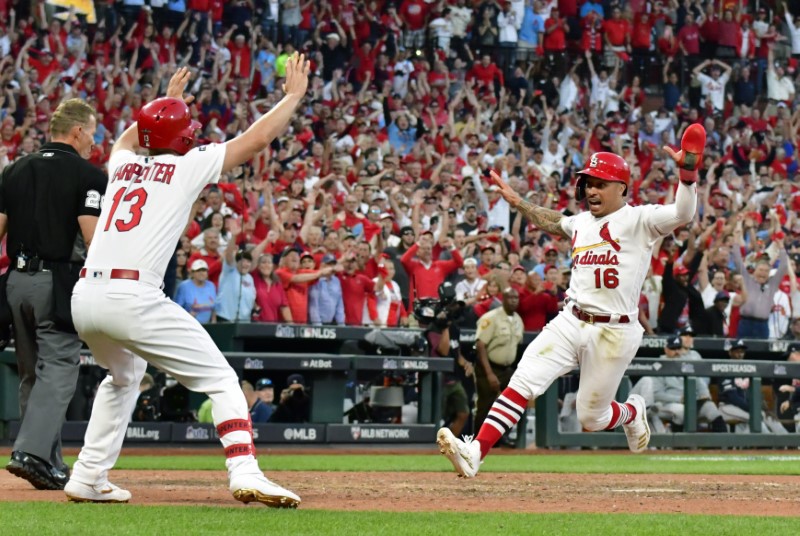 Yadier Molina’s 10th-inning sacrifice fly lifted the St. Louis Cardinals to a 5-4 victory over the visiting Atlanta Braves on Monday and sent their National League Division Series to a decisive fifth game.

The series will conclude Wednesday in Atlanta, with the winner advancing to meet the Los Angeles Dodgers or the Washington Nationals in the NL Championship Series.

Molina tied the game 4-4 with his eighth-inning RBI single, then decided it in the 10th by driving home Kolten Wong from third base with his fly ball to left field.

Miles Mikolas (1-0), the eighth Cardinals pitcher, pitched one scoreless inning for the victory. Julio Teheran (0-1), the seventh Braves pitcher, took the loss by allowing one run in two-thirds of an inning.

Ryan Zimmerman hit a three-run homer, Anthony Rendon drove in three runs, and Washington pulled away for a win over visiting Los Angeles in Game 4 of the NL Division Series.

Washington evened the best-of-five series at 2-2 and forced a decisive Game 5 on Wednesday night in Los Angeles. Both teams have won one game at home and one game on the road.

Max Scherzer (1-0) stymied the Dodgers over seven quality innings on short rest. He gave up one run on four hits while walking three and striking out seven. Dodgers reliever Julio Urias (0-1) gave up three runs on three hits while recording only two outs.

Charlie Morton overcame an early home run by Jose Altuve to pitch five effective innings, and Kevin Kiermaier gave Tampa Bay the lead for good with a three-run homer, helping them stay alive in the American League Division Series with a win over Houston in St. Petersburg, Fla.

The Rays narrowed the Astros’ lead in the best-of-five series to 2-1, with Game 4 also scheduled for the Rays’ home field on Tuesday.

Coming off a win at Oakland in the AL wild-card game last Wednesday, Morton served up a homer to Altuve on his eighth pitch Monday. Morton didn’t give up another run, and he yielded three hits and two walks while striking out nine. Ji-Man Choi, Brandon Lowe and Willy Adames hit solo homers for Tampa Bay, which pounded Astros starter Zack Greinke for six runs in 3 2/3 innings.