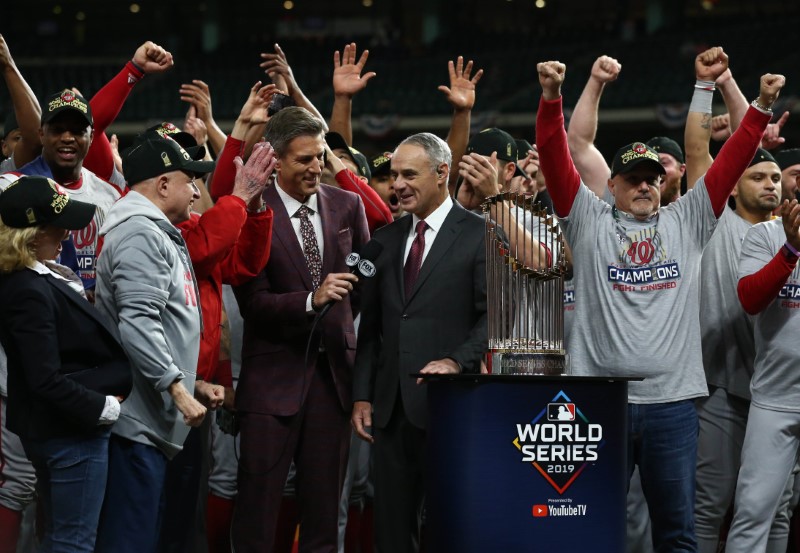 The Washington Nationals fought back from deficits, overcame a series of injuries and fended off a long list of powerful opponents on the way to capturing their first Major League Baseball World Series title.

Washington’s 6-2 Game Seven victory over the Houston Astros on Wednesday was symbolic of the team’s journey this season.

They trailed 2-0 at Minute Maid Park but rallied in the seventh inning where they delivered a go-ahead home run by 36-year-old Howie Kendrick, who a year earlier had suffered a career-threatening Achilles injury.

Starting pitcher Max Scherzer had to produce a much quicker turnaround. An irritated nerve in his neck forced him to miss his scheduled Game Five Start on Sunday when he was unable to even dress himself.

Battling through adversity has been the name of the game for the Nationals all season long.


“This is the most resilient bunch of guys,” Nationals manager Dave Martinez said. “They believed in each other. The biggest thing for us was never quit. We stayed in the fight – we won the fight.”

Scherzer said the team had come through the wars together.

“These guys battled. It was the next guy up, everyone gave their all,” he added. “One through 25 is the only way I can describe (this team). Energy, camaraderie, belief in one another.”

There were plenty of moments that made it difficult to believe in these Nationals.

They lost franchise cornerstone Bryce Harper in the off-season after he signed a massive deal with the Philadelphia Phillies.

They stumbled out of the gate with a 19-31 start to the season that put pressure on manager Martinez, who earlier in the year underwent a procedure following a heart scare.

The Nationals scratched out a Wild Card berth in the National League and trailed Milwaukee 3-0 in the one-game eliminator before a late burst brought them home.

Next up was the NL’s best team, the Los Angeles Dodgers, whom they snuck past in extra innings of a Game Five decider thanks to a Kendrick grand slam. Washington swept St. Louis in the NLCS and took the first two games on the road against the MLB’s top squad, the Astros.

Houston fought back to win the next three in Washington but the Nationals would not be denied, clinching their maiden Fall Classic by winning the last two games of the World Series in Houston.

Ryan Zimmerman, the franchise’s first ever draft pick in 2005, said Wednesday’s game capped an incredible year “What a story,” Zimmerman said. “What a fun year. The way this game went tonight is the way our whole season went.”