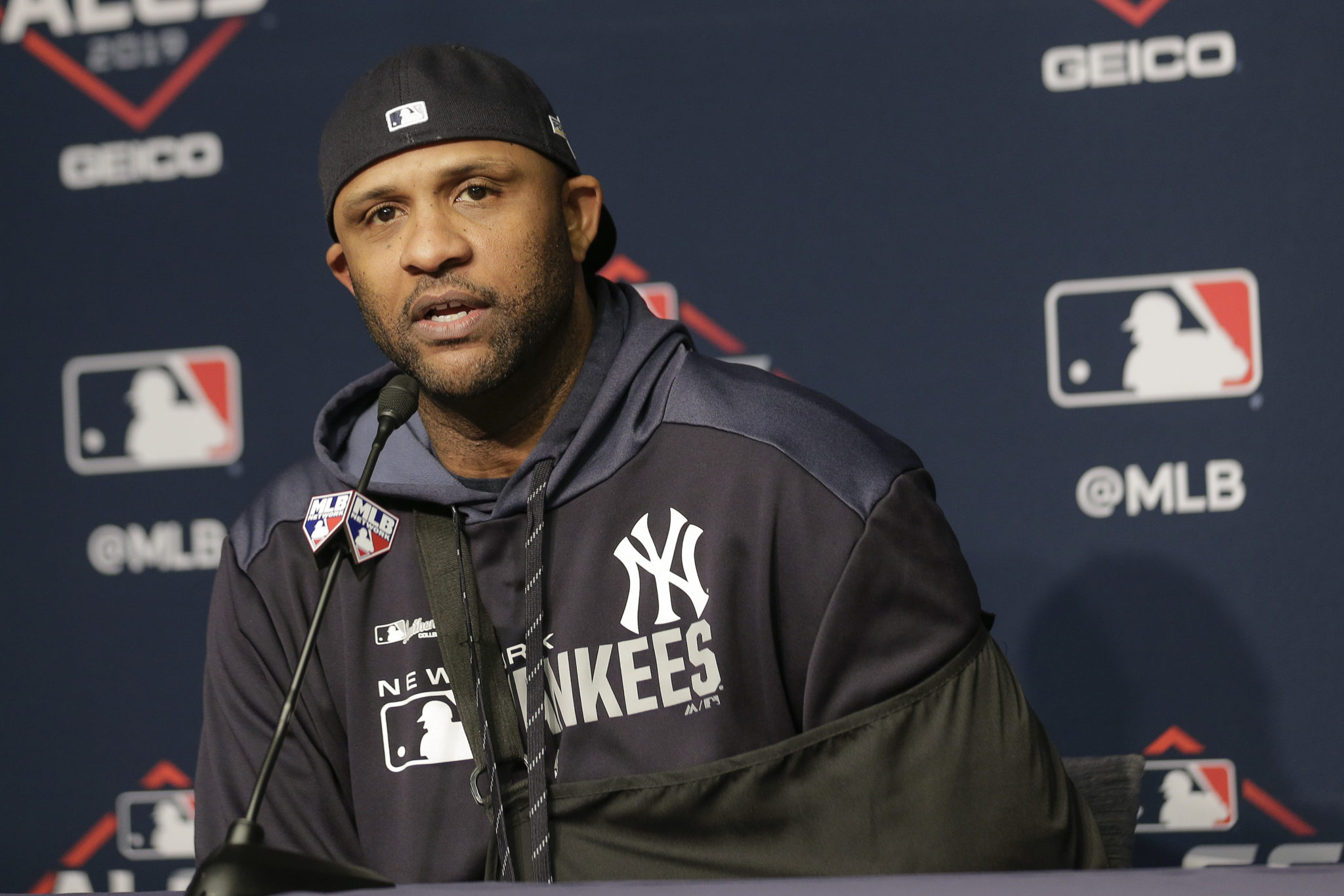 CC Sabathia walked into Yankee Stadium’s interview room with his left arm in a sling Friday, 16 hours after shuffling off the mound in pain following the 58,692nd and final pitch of his major league career.

That powerful left shoulder — which earned six All-Star appearances, the 2007 AL Cy Young Award and possibly a spot in the Hall of Fame — finally had given out.

“I think it’s just kind of fitting,” he said . “I threw until I couldn’t anymore.”

His burly body — 6-foot-6, 300 pounds and perhaps a tad more — had echoed the decision he announced last winter.


No second thoughts about retirement following 19 major league seasons. No temptation for more, the 39-year-old explained to his wife.

“I told Amber last night that this was the best way for it to end for me because of the way I’ve been feeling, loving the bullpen, jogging out, feeling pretty good, I feel like about July of next year I’ll be like, ‘I think I can pitch,'” he said.

He dislocated a joint in his pitching shoulder during the eighth inning of New York’s Game 4 loss to Houston on his 17th pitch, then pushed his arm through three more before the torment became too great. He was dropped from the Yankees’ AL Championship Series roster Friday before Game 5 and replaced by right-hander Ben Heller.

New York closed to 3-2 in the best-of-seven series with a 4-1 win, but even if the Yankees advance Sabathia would not be eligible to return for the World Series. He said he will have an MRI to determine whether he needs surgery.

“I was in a pretty good amount of pain last night and today. Waking up, I didn’t sleep that good,” Sabathia said. “It’s pretty sore and the pain has been pretty intense since that pitch.”

Tributes came from throughout baseball. His arm may have betrayed Sabathia, but teammates and opponents spoke of his heart.

“CC is such a big man and big personality of a big man,” said Houston manager AJ Hinch, who caught Sabathia during spring training with Cleveland in 2003. “If he wanted to stay as a left-handed reliever, teams would line up to let him keep pitching.”

Sabathia finished with a 251-161 regular season record with 3,093 strikeouts. He announced before the season that this was going to be his last year, and he made four trips to the injured list caused by his balky right knee, repaired by surgeries after the 2010 season, in July 2014 and again after the 2016 and ’18 seasons. He needed a brace on the knee to pitch along with periodic injections of painkillers and lubricant.

Modern medicine and a grueling, 2½-hour warmup routine enabled him to throw 56,405 pitches in the regular season and 2,287 more in the postseason, according to STATS. He knows his career may have been shortened by his warhorse performance for Milwaukee in 2008, when he was acquired from Cleveland after 7½ seasons with the Indians.

Trying to earn the Brewers’ first playoff berth in 26 years, he pitched three straight times on three days’ rest in September, the last a four-hit complete game to clinch a wild-card berth on the regular season’s final day. He came back on short rest again and lost Game 2 of the Division Series to Philadelphia.


Sabathia was on the verge of becoming a free agent, yet showed no concern about damaging the arm that earned his living.

“Everybody told me I was crazy,” he said. “I wish I could have pitched three more times. That team was so good. We were having so much fun.”

He signed a $161 million, seven-year contract with the Yankees that offseason, brought to the Bronx to change the culture and bolster the rotation. He led the Yankees to a World Series title in his first season and so desperately wanted to return. He even moved to the bullpen in late September this year, then overcame a shoulder injury to come back against the Astros.

Sabathia said he was hurt on a 92 mph cutter that Aledmys Díaz popped up.

“When I released the ball, my shoulder kind of went with it,” Sabathia said.

He remained in for three more pitches to George Springer, still reaching 91 mph. He walked off the mound toward second, making a stretching motion with his arm. Head athletic trainer Steve Donahue came to the mound and Sabathia tried a warmup toss, hoping somehow to push through, but he had to leave.

“It’s kind of a perfect way,” Yankees manager Aaron Boone said. “He gave us everything he had, and he left it all out on the mound. Even though it’s sad to see him walking out, there’s something kind of awesome about it in a weird way, too.”

Springer and Houston ace Gerrit Cole joined in the fans’ applause as Sabathia walked off to a standing ovation.

“I think that’s what got me more emotional than the actual injury, just hearing the fans and the way that they were cheering me,” he said. “Makes me feel good. Makes me feel like I made the right choice 11 years ago.”

When he reached the dugout, his face contorted, Sabathia took four steps down toward the clubhouse, then sat near the bottom, his back to the field, as Donahue tried to console him.

“Every single time he went out there, you had to rip the ball or his jersey off to get him off that mound,” Yankees slugger Aaron Judge said. “He got everything out of that arm. That’s a warrior right there.”