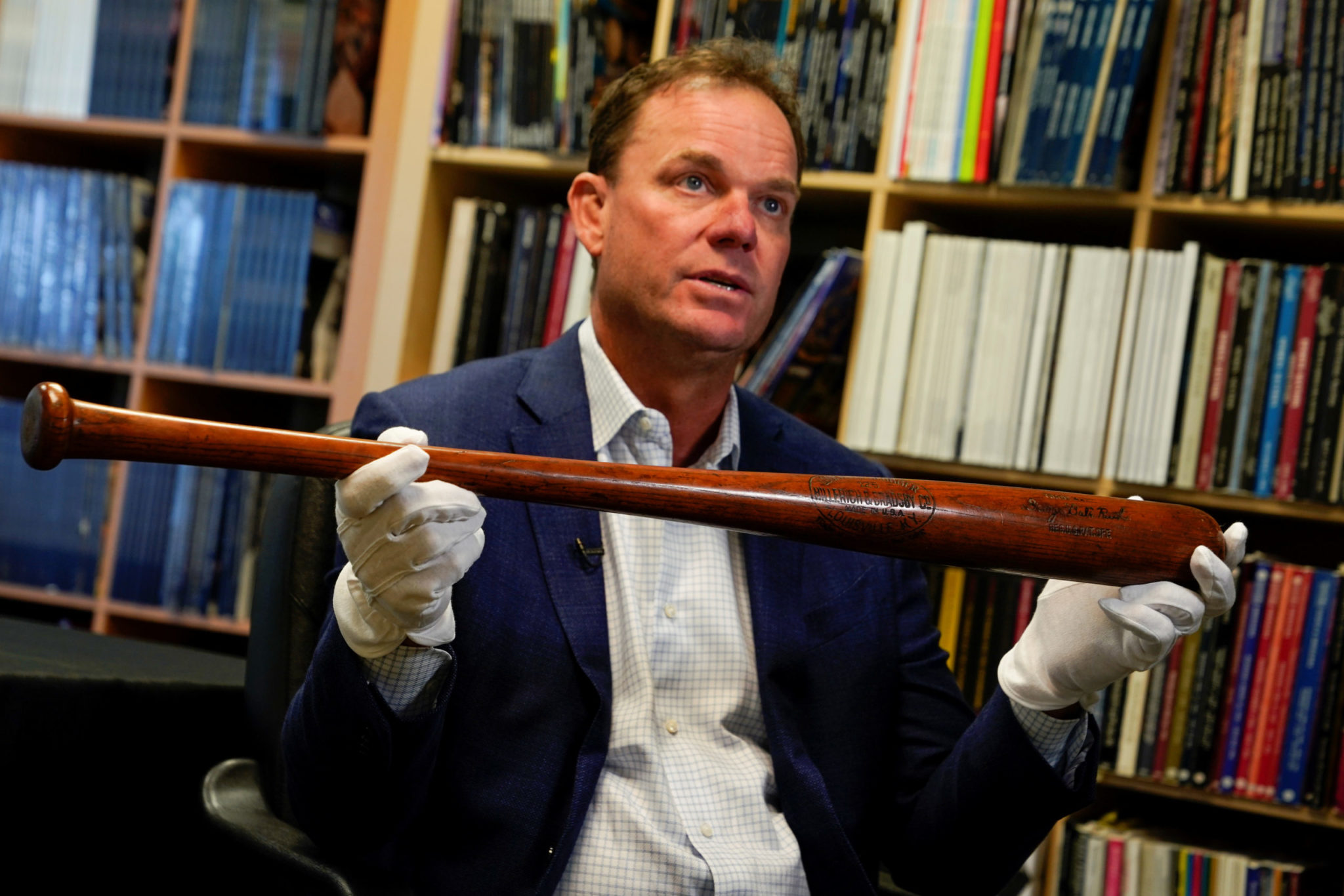 Babe Ruth is poised to hit another home run, only this time on the sports memorabilia market when the bat he used to slug No. 500 nearly a century ago hits the auction block on Wednesday.

Known as the “Sultan of Swat” during a storied Major League Baseball career Ruth, who passed away in 1948, is now the King of Memorabilia, with the ash bat the New York Yankees slugger used on Aug. 11, 1929 to become the first player to hit 500 homers expected to fetch well over a million dollars.

For any serious collector, no showroom is complete without at least one item connected to “the Babe.”

Of the top 20 highest priced sports memorabilia items almost half (nine) have the Ruth name attached to them.


In June, a Yankees jersey worn by Ruth went for $5.64 million, making it the most expensive piece of sports memorabilia ever sold, while the bat he used to slam the first ever home run at Yankee Stadium sold in 2004 for $1.26 million.

Online bidding for the Louisville Slugger used to swat number 500 begins Nov. 27. By the time it closes on Dec. 14, it will almost certainly find a spot in the top 10.

“We’re estimating this at a million and up just to be conservative,” David Kohler, president of SCP Auctions, which will conduct the sale, told Reuters. “We think it will surpass the other bat. This 500 bat is kind of the brother to it.”

“Even though he has been gone since 1948 he remains the King,” Kohler said.

There is genuine excitement in the collector world as what is known as “a fresh piece” makes its way to market.

Unlike some items that have changed hands several times, Ruth’s 500th home run bat has spent decades out of sight in undisturbed solitude.

Ruth gifted it some time in the mid-1940s to the mayor Suffern, New York, Jim Rice, a golfing, bowling and drinking buddy of one of baseball’s original Hall of Famers.

For decades the historic bat leaned impassively in a corner of the Rice family den, treated not as a piece of history but more like a piece of furniture no different than the bookcase and coffee table.

After Jim and then his wife passed away, the bat spent three decades hidden in a closet in the home of their only son Terry.

The childhood joy Terry had reveled in from owning such a sporting treasure has given way to dread, the bat too valuable to display or even tell anyone about.


“It just got to the point I couldn’t leave it out,” Rice told Reuters. “I was less cautious years ago but more recently I hardly told anybody.

“I just couldn’t enjoy it, it was hidden away. My girlfriend was afraid to have it here, that somebody would break in so we weren’t enjoying it.

“It just seemed time,” he said.

‘A PIECE OF HISTORY’

There are currently 27 members of the 500 home run club but Ruth, who went on to slug 714 career homers, was the first.

All but eight are in baseball’s Hall of Fame and most of those who aren’t, such as Barry Bonds, have had their careers tainted by what is referred to as the ‘steroid era.’

As much a piece of art as an historic artifact, Ruth’s 500 bat has been painstakingly authenticated by industry leaders PSA/DNA, who have given it their highest grade.

Traced back to the manufacturer, the bat matches the model number, size, weight and finish ordered by Ruth, and displays unique characteristics such as a left-barrel contact area and cleat impressions on the upper barrel.

Ruth had a habit of knocking the dirt out of his cleats with the barrel of his bat, leaving small impressions on the barrel.

While it was hard to say goodbye, Rice and his two older sisters decided it was time to sell.


“We grew up with it and it was just something that was always there,” said Rice. “I would take it out once in awhile and the day they came to pick it up I took it out one more time.

“I was looking at it all morning and took pictures of it and you look at it, it is very pretty,” he said.