Plays of the year: 2019 had a flair for the dramatic 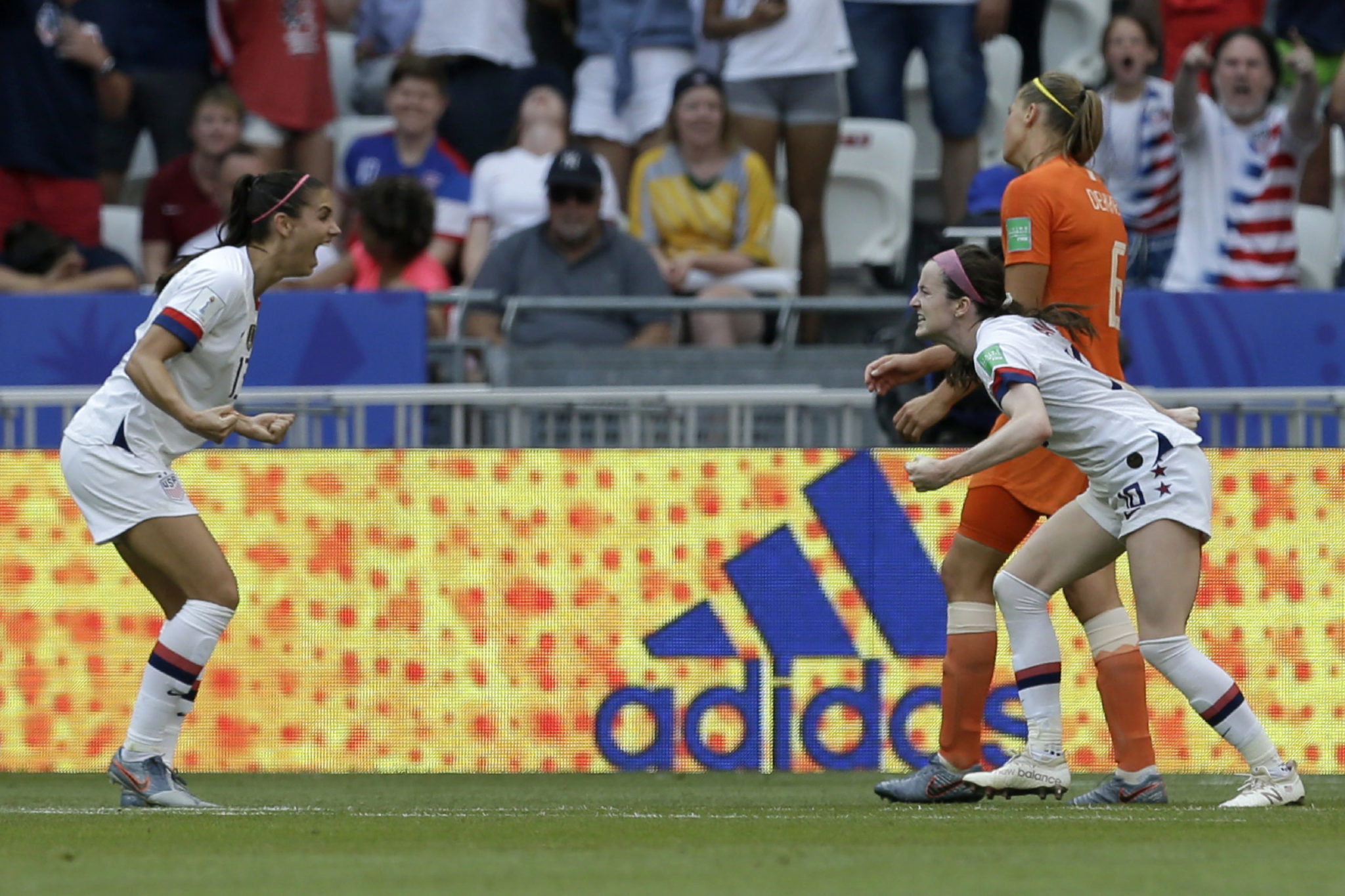 Thousands of pro games, hundreds of thousands of college games, millions of high school games and billions of youth-league, rec-league, bar-league and whatever other sort of league games you can think of were contested in 2019.

That means there were probably trillions of plays.

Of those, we’re picking 10 as the best of the year.

It’s a thankless task. Spoiler alert: Yes, we are missing some good ones. We’re missing some very — very — good ones. Dwyane Wade’s buzzer-beater to beat Golden State. Gary Woodland using his wedge on the 17th green to just about clinch the U.S. Open. Notre Dame’s Arike Ogunbowale throwing a no-look behind-the-back pass for an assist. An outfielder for Liberty front-flipping over a wall to make a catch.

They were all fantastic. So were countless others.

But let’s get to the ones that made the list.

Aldahir Cazun is the goalie for the men’s soccer team at New Jersey City University. He’d just made a diving save to protect a 2-0 second-half lead against Purchase College, then casually walked with the ball up the top of the penalty box before punting it away.

And then he got a bounce he’ll never forget.

Cazun’s punt was a bit wind-aided. The ball carried about 80 yards in the air, hit the grass on the other end with some serious topspin, bounced over Purchase goalie Mario Olmedo and found its way into the net.

Imagine: Tulane beat Houston on a 53-yard touchdown pass with three seconds left — and that wasn’t the one making this list.

The play before did.

Tie game, 18 seconds left, Tulane lined up as if it was going to kneel down and send the game to overtime. Except the Green Wave decided to employ some trickery, and Amare Jones’ 18-yard scamper got them near midfield — good enough for them to try the Hail Mary game-winner.

Penalty kicks are an inhumane way to decide anything, especially a national championship.

The Stanford goalie was the star of the Women’s College Cup, leading the Cardinal to the national title after stopping two penalty kicks from North Carolina in the game-deciding shootout. She set the tone with a dive to her right to stop the first offering from the Tar Heels, then stoned them again in the sixth round with a dive to the left.

Meyer got up, found the nearest camera, flexed, shouted and emphatically pointed to the “Stanford” across her chest after putting her team on the brink of the title. Kiki Pickett then won it for Stanford with the deciding penalty kick.

Carl Yastrzemski won seven Gold Gloves for the Boston Red Sox. His grandson Mike Yastrzemski is pretty good with the leather as well.

The younger Yaz had some unforgettable moments in 2019 — homering at Fenway Park among them — but he turned in arguably the baseball play of the year with his game-ending catch for San Francisco in a game against Milwaukee.

Yasmani Grandal represented the tying run for the Brewers and he hit a sharp liner into left-center field. Yastrzemski got a good jump, dove and snared the ball to end the game just before it would have hit the grass.

“What a catch by Yastrzemski,” then-Giants manager Bruce Bochy said.

Wasn’t the first time those words were said in baseball.

The St. Louis Blues had a comeback story for all time — going from being the worst team in the NHL midway through this past season to winning the Stanley Cup.

To get there, the Blues needed some Maroon magic first.

Patrick Maroon’s goal in double overtime gave St. Louis a win in Game 7 of its Western Conference semifinal series against Dallas. The Blues went on to beat San Jose in six games, then needed another Game 7 to defeat Boston and win the Stanley Cup.

This is where these lists get difficult. Choosing one game-winning shot is impossible.

Senior Annie Giannone of Ithaca College scored 10 of her team’s final 11 points, including a sharp-angled runner with six seconds left to give her team — which was down by eight before her late closing surge — a 76-75 win over Desales and berth in the NCAA Division III quarterfinals.

Don’t forget Nathan Bain, whose layup as time expired gave Stephen F. Austin a shocking win over then-No. 1 Duke 85-83. The shot put Bain — and his story — in the limelight. Over the next few days, over $150,000 was raised for his family, who endured hardship when Hurricane Dorian slammed the Bahamas.

But the best of the buzzer-beating bunch in 2019 was Kawhi Leonard, whose jumper from the deep right corner bounced, then bounced again, then bounced yet again, then bounced ONE MORE TIME before finally going in to give Toronto a 92-90 win over Philadelphia in Game 7 of the Eastern Conference semifinals. You know the rest: Toronto beat Milwaukee for the East title, then topped Golden State in six games for the NBA title.

This is how you finish a World Cup championship.

Rose Lavelle of the U.S. took a pass just inside of the midfield stripe in the 69th minute of the Women’s World Cup final against the Netherlands, a game the Americans were already leading 1-0. And she sealed the title in style, dribbling about 40 yards downfield as three Dutch defenders attempted to thwart her path and a fourth was just a couple steps behind.

Lavelle waited until the last possible second before taking a left-footed strike, threading the ball between the outstretched legs of two Netherlands players before it skipped past a helpless — and ordinarily fantastic — Dutch goalie Sari van Veenendaal.

The outcome was never in doubt from there, and the Americans won the World Cup for the fourth time.

Due respect to James Harden, Russell Westbrook and anyone else in the NBA, the triple-double of the year was turned in by someone who stands 4-foot-8.

If we’re going to get technical, her triple-double is actually called a triple-twisting double backflip — which Biles pulled off during her floor routine multiple times this year. The rule in gymnastics is if you’re the first one to execute a move, it gets named on your behalf. The triple-double in gymnastics is the Biles II; the plain old double-double … well, that’s the Biles, since she was the first to do that, too.

The 2019 season for the Miami Dolphins was largely forgettable, except for one play where a punter found a kicker for a touchdown.

It happened against Philadelphia, a play where the Dolphins sent five players out to the left, four others to the right and had Daniel Kilgore snapping the ball to punter Matt Haack — who was basically in a shotgun quarterback stance. Haack darted to his left and just as the Eagles were about to bring him down he shovel-passed to Jason Sanders, the Dolphins’ kicker who had slipped behind the defense.

Sanders caught it, the Dolphins went on to win, and it was the first time a kicker and punter combined for an NFL touchdown since 1964.

Just about anyone can throw a lob for a dunk in the NBA, particularly in the All-Star Game.

Curry took a pass from Joel Embiid on a fast break and — in less than a second — decided to set up Giannis Antetokounmpo for a dunk. Except a lob would be too boring. Instead, Curry hammered a pass off the court, then watched the ball ricochet several feet above the rim as it made its way toward the Milwaukee star.

Antetokounmpo handled it as if they’d been practicing the play for years, timing his jump perfectly to corral the ball and slam the dunk home.

“Timing was unreal,” Curry said. “His length, finishing it and getting it before it came down … a pretty bang-bang play.”

The pass — and the play — just was a little better than the rest, in a year that had countless unforgettable moments.

Related Topicsplays of the year