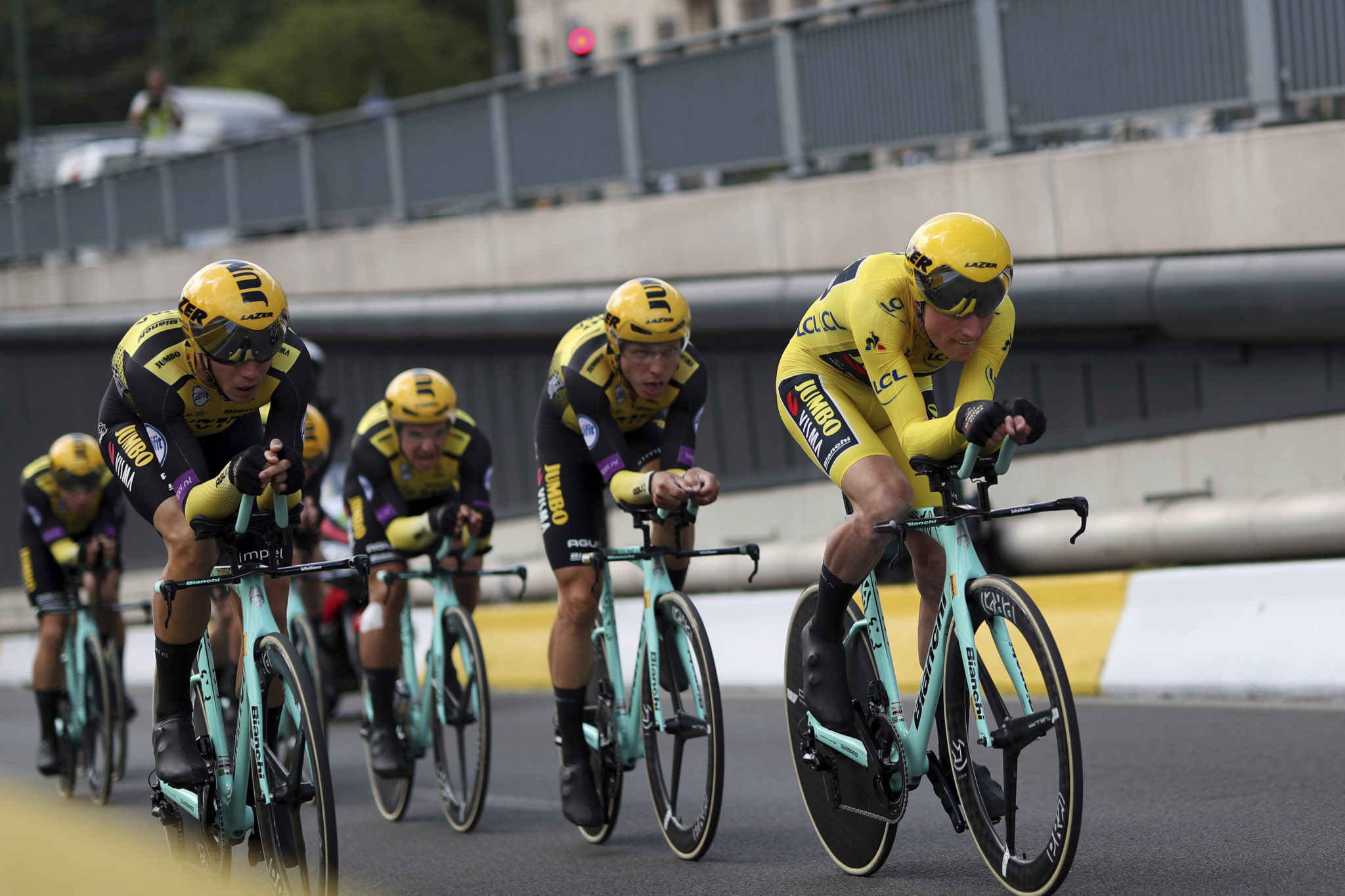 BRUSSELS — Just two days into the Tour de France, Geraint Thomas is already putting daylight between himself and some of the riders dreaming of dethroning the reigning champion.

Thomas, who claimed his first Tour win last summer, answered questions surrounding his form and fitness in a dominant fashion during Sunday’s short team time trial around the streets of Brussels.

Thomas arrived at the Tour on the back of a rather mundane season and no victory to his name. Even worse, he crashed out of his final preparation race last month, and endured another setback, though minor, when he was caught in a pile-up near the finish of Saturday’s opening stage.

With the No. 1 bib on his back, Thomas, a former track specialist, showed no signs of weakness following his spill. He took solid turns at the front and led his teammates across the finish line close to the Atomium, the iconic Brussels monument built for the 1958 World Fair.

The only team riding faster than Ineos on Sunday was the Dutch outfit Jumbo-Visma, which covered the 27.6-kilometer course (17.1-mile) in 28 minutes, 58 seconds, keeping the yellow jersey on Mike Teunissen’s shoulders.

They were 20 seconds faster than Thomas and his teammates, with Deceuninck Quick-Step completing the podium, 21 seconds off the pace.

“Looking at GC (general classification), it’s a good performance,” said Thomas. “It was a positive day for sure.”

Teunissen’s teammate Steven Kruijswijk is now the best placed overall contender, who sits third overall with a 20-second lead over Thomas and Egan Bernal, the co-leader at Ineos this summer in the absence of four-time champion Chris Froome.

Even without Froome — the dominant Grand Tour rider in recent years and an expert in the race against the clock — Ineos was still able to replicate its result from last year’s team time trial. Dylan van Baarle, who replaced Froome in the team, was up to the task and there was no weak link on the road.

“We took some time on some good GC riders today, so it was perfect for us,” Bernal said.

Before the race leaves Belgium on Monday, Thomas and Bernal gained 12 seconds on Pinot, 16 seconds on Nibali, and 21 seconds on Yates and Fuglsang. They opened more significant gaps with Quintana (45 seconds) and Bardet, the day’s big loser who conceded 59 seconds.

After rolling down first from the start ramp near Brussels’ Royal Palace, Ineos riders stayed in the lead for two hours until Jumbo-Visma, the last team to set off, bettered their time in an impressive performance.

Putting on a well-choreographed display, the Dutch team’s riders covered the route at an average speed of 57.2 kph (35.5 mph), close to the record of 57.8 set by Orica-GreenEdge when they won the 2013 team time trial on a similar distance.

“We went hard from the start. We heard we were the fastest … We were flying,” Teunissen said.

The first Dutch rider to wear the race leader’s jersey in 30 years, Teunissen was a surprise winner of Saturday’s opening leg. Surrounded by teammates best-suited for the flat terrain, including former time trial world champion Tony Martin, Teunissen did not play second-fiddle in his aerodynamic skinsuit and helmet.

“Yesterday it was a dream come true, and it’s the case today again,” he said. “It’s not that I’m getting used to winning stages at the Tour de France but it’s two out of two now and it’s really, really nice.”

After two days in Belgium, the peloton will enter France during Monday’s Stage 3 which leads riders from the Belgian town of Binche to Epernay in the Champagne region.

Samuel Petrequin is a reporter for The Associated Press.