In a sport that sometimes forces athletes to choose between skill and execution, Biles doesn’t have to. 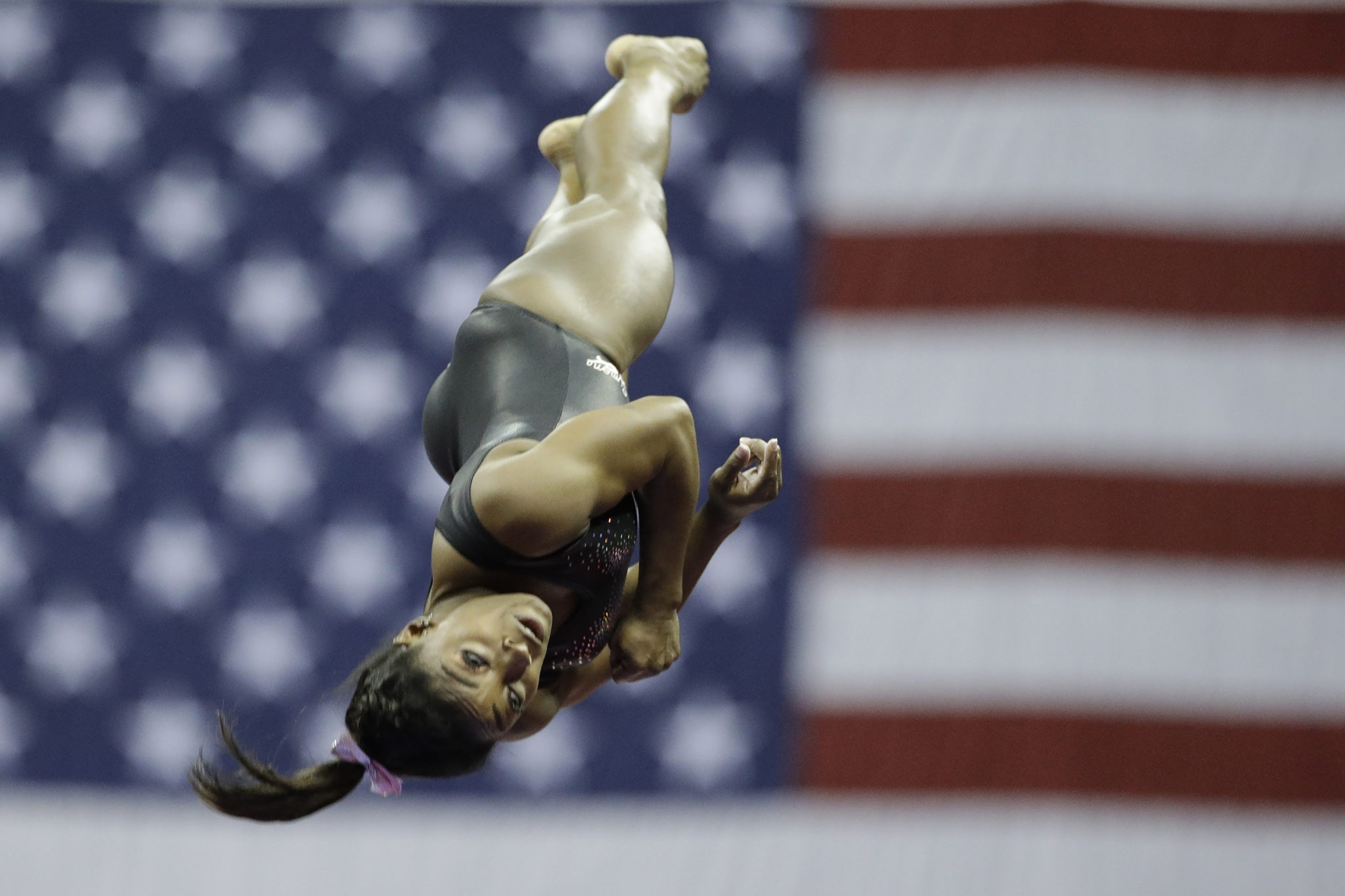 KANSAS CITY, Mo. — The choice was entirely hers. Only there really wasn’t of one for Simone Biles to make.

Sure, she could have taken her triple-twisting double-flip (aka “the triple-double”) out of her floor exercise routine during the final night of the U.S. women’s gymnastics championships on Sunday. She surely didn’t need it to assure herself of another national title.

Still, even as her coach Laurent Landi left the option up to her after the Olympic champion’s bid to become the first woman to complete the triple-double in competition came up a bit short on Friday, he knew the answer.


Spend enough time in the gym around the 22-year-old who is redefining what’s possible in her sport one exhilarating routine at a time and it quickly becomes evident that sidestepping a challenge isn’t really her thing.

So she threw it at the end of her first tumbling pass, fueled by adrenaline, ambition and otherworldly skill. When the dizzying combination ended with her feet firmly on the floor — if barely in bounds — the jolt through the packed arena was palpable. The smile on her face unmistakable. And the competition — just like it has been for six years and counting whenever Biles is involved — was over.

The triple-double served as the exclamation point on her sixth national championship. Her two-day total of 118.500 was nearly five points clear of 16-year-old Sunisa Lee in second and more almost seven points ahead of third-place finisher Grace McCallum.

Yet Biles doesn’t pay too much attention to the margin or her scores for that matter. She’s been a fixture atop the podium for six years and counting. Attempting to find the boundaries of her immense talent is what drives her.

It’s why she got so angry after putting both hands down as she tried to land the triple-double on Friday. It’s why she never thought about ditching it on Sunday. And it’s why she sneaked a peek at her phone while rotating from floor to balance beam, typically a no-no during a meet. Well, at least for anyone not named Simone Biles.

“I wanted to see how it looked,” she said.

“It’s like she hit a hole in one and we were all there,” USA Gymnastics high performance director Tom Forster said. “It’s a big deal and we all know it. No one in the world has done it before in the women and actually, she does it better than most of the men who have done it. She should be super excited about that.”


She was. When Biles finished off a two-hour showcase that highlighted how wide the gulf between herself and the rest of the world has become by drilling her dismount on uneven bars: she danced.

Well, sort of. Biles gave Landi a relieved high-five before sticking out her tongue and waving her arms as she ran to hug the rest of competitors in her rotation.

The anger of Friday night — when she openly seethed after shorting the triple-double and making a bit of a mess on bars — was gone.

“I was a lot happier today,” Biles said. “I feel I haven’t been as confident on bars this year as I was last year. To finally do a good routine like I can do it, I was really happy. I was very happy and the last event, so I was like, ‘Thank God we’re done.'”

For now anyway. Biles is two months away from a trip to the world championships — where her 20 medals are tied for the most by a female gymnast — and a year away from a return to the Olympics. She was a sensation in 2016, cementing her status as one of the best ever with two weeks of gymnastics that came as close to perfection as the sport allows.

A year to go before a return trip to the games, Biles is even better. And really, it’s not close.

“She’s a freaking beast,” said MyKayla Skinner, an alternate on the 2016 Olympic team who clinched a spot on the national team by finishing eighth. “Like, I don’t even understand. I always ask her, ‘Do you realize how good you are?’ And she’s like ‘Yeah, but I don’t know.’ It just comes so naturally, it’s amazing.”

In a sport that sometimes forces athletes to choose between skill and execution, Biles doesn’t have to. She not only puts together the most difficult routines in the world, she does them better than anyone else. Biles won floor, balance beam and vault and finished third on bars even with her “meh” set on Friday.

“She does stuff that I never thought people could do,” Lee said.


Lee and 2017 world champion Morgan Hurd were the only women in the field to place ahead of Biles on any event, finishing one-two on bars, solidifying their chances of joining Biles at world championships in Germany in October in the process.

Hurd rebounded from a rocky floor exercise on Friday that dropped her to eighth overall to zoom up to fourth despite admitting she “wanted to throw up a little” when the night began. She promised she would be better on Sunday and she was, despite a technical glitch before her floor when the music started before she took her starting position. She walked off the podium, exhaled and then went out and drilled her set.

“I think more than anything, tonight just really helped my confidence,” Hurd said.

Something every gymnast struggles with sometimes. Biles included. Yes, really. It speaks to her inner perfectionist that even after finishing the triple-double, she still knows it wasn’t quite her best.

“It wasn’t as good as in some of the trainings,” she said. “But I’m just happy that I landed it because after night one, my confidence got shot down. So I was really worried about it going into today and that was all I could worry about.”