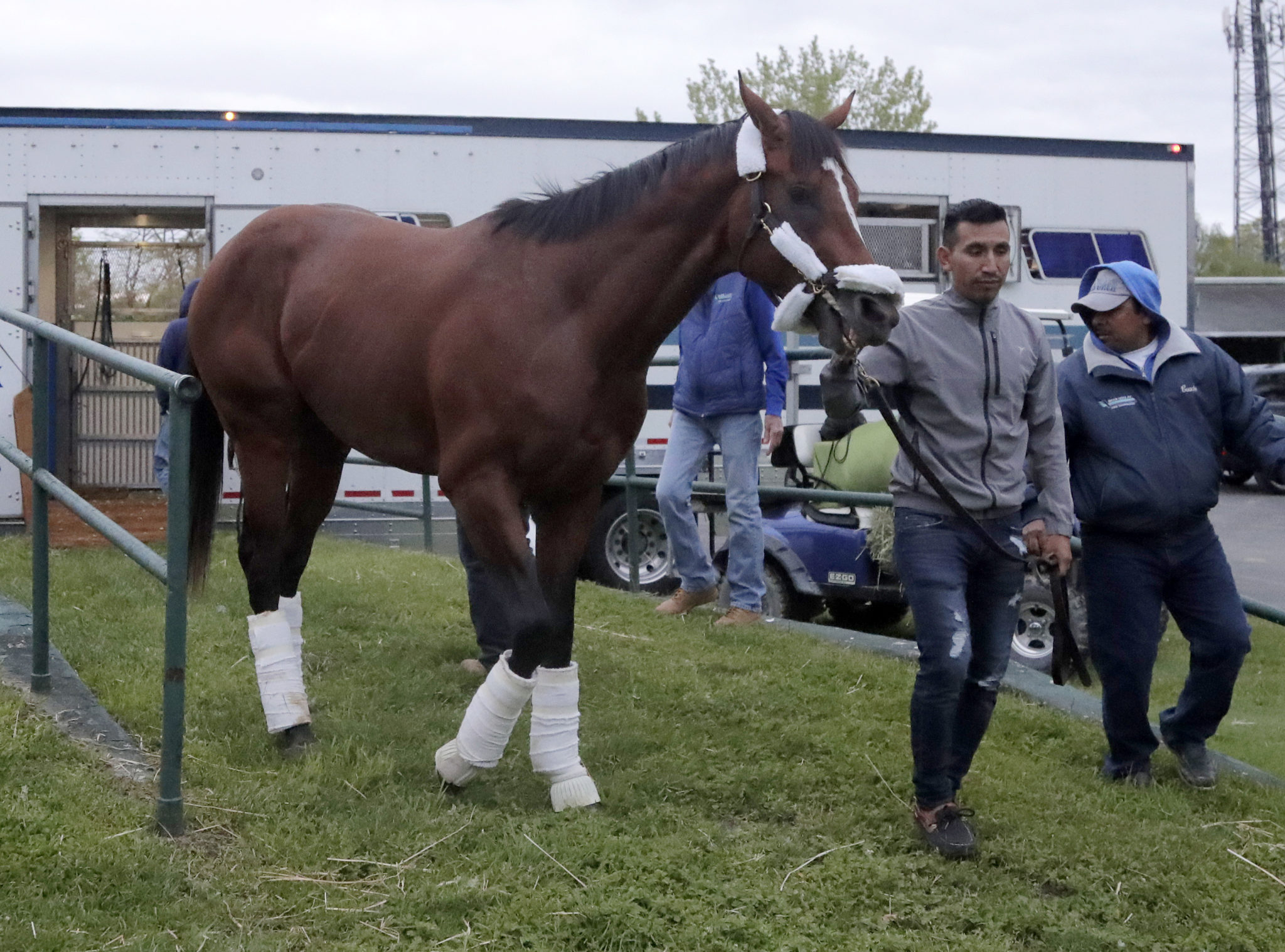 OCEANPORT, N.J. — A weary Maximum Security arrived Tuesday at Monmouth Park, where his trainer plans to race the colt in the $1 million Haskell Invitational in July.

The first Kentucky Derby winner disqualified for interference in the race’s 145-year history pulled into the Jersey shore track shortly before 6 a.m.

The previously undefeated colt was taken to the barn of trainer Jason Servis. The Florida Derby winner was walked and then put in a stall to rest.

Servis was not there but is expected Wednesday or Thursday, the track said.

There were a few photographers, a videographer and a reporter outside the No. 2 barn, adorned with a big pink plant in front and hanging flower pots.

An appeal of the disqualification was filed on behalf of owners Gary and Mary West on Monday. The Kentucky Horse Racing Commission denied it within hours, saying the stewards’ decision is not subject to appeal. Gary West, however, said the matter is not settled.

Gary West has done several media interviews since Saturday, and War of Will owner Gary Barber took exception to West’s comment in a TV interview that his horse caused the infraction in the Derby.

“I categorically deny this false accusation,” Barber said in a statement Tuesday night. “The video evidence irrefutably shows that his horse, Maximum Security, caused a major infraction that almost led to a catastrophe and in doing so, denied my horse and others of a better placing.”

Barber said that while he empathizes with West for being denied the victory “it is wrong for him to deflect blame anywhere else.”

Barber added that he’s glad both War of Will and Maximum Security survived the Derby unscathed and will race again. War of Will may run in the Preakness on May 18.

Maximum Security won’t run in the Preakness. Neither will Kentucky Derby winner Country House, who was ruled out Tuesday, trainer Bill Mott said.

Dennis Drazin, the chief executive and chairman of Darby Development LLC, which operates the track, said Servis told him he wants Maximum Security to run in the Haskell, the track’s biggest race.

Drazin disagreed with the Derby disqualification.

“There was no other horse that was going to beat him, even if they ran around a second time,” said Drazin, who uses Servis as his trainer.

Not so, said trainer Kelly Breen, whose Ruler on Ice won the 2011 Belmont Stakes. He called the takedown the right move.

“I saw that the horse changed leads at the five-sixteenths pole and ran from about the one path to the five path and we were fortunate enough nothing happened drastically in the race,” he said. “I do believe they made the decision that needed to be made. Thankfully, nothing went wrong. It could have been devastating if something did go wrong.”

Trainer Chuck Spina, who has worked at Monmouth Park since 1971, was upset to see the win taken from Maximum Security and Servis, whom he has known for decades.

“He was much, much the best and what bugs me the most is if there was such a flagrant foul how come there wasn’t a steward’s inquiry as soon as they crossed the finish line,” Spina said. “If that jock (Flavien Prat) wasn’t smart and saw there was something going on at the head of the stretch and figured he could get pushed up, if he doesn’t claim foul, the official sign is going up.”

Jockey Joe Bravo, the leading rider at Monmouth Park 13 times, said his mind changed the more he watched the replays.

Right after the race, he felt Maximum Security would not be disqualified.