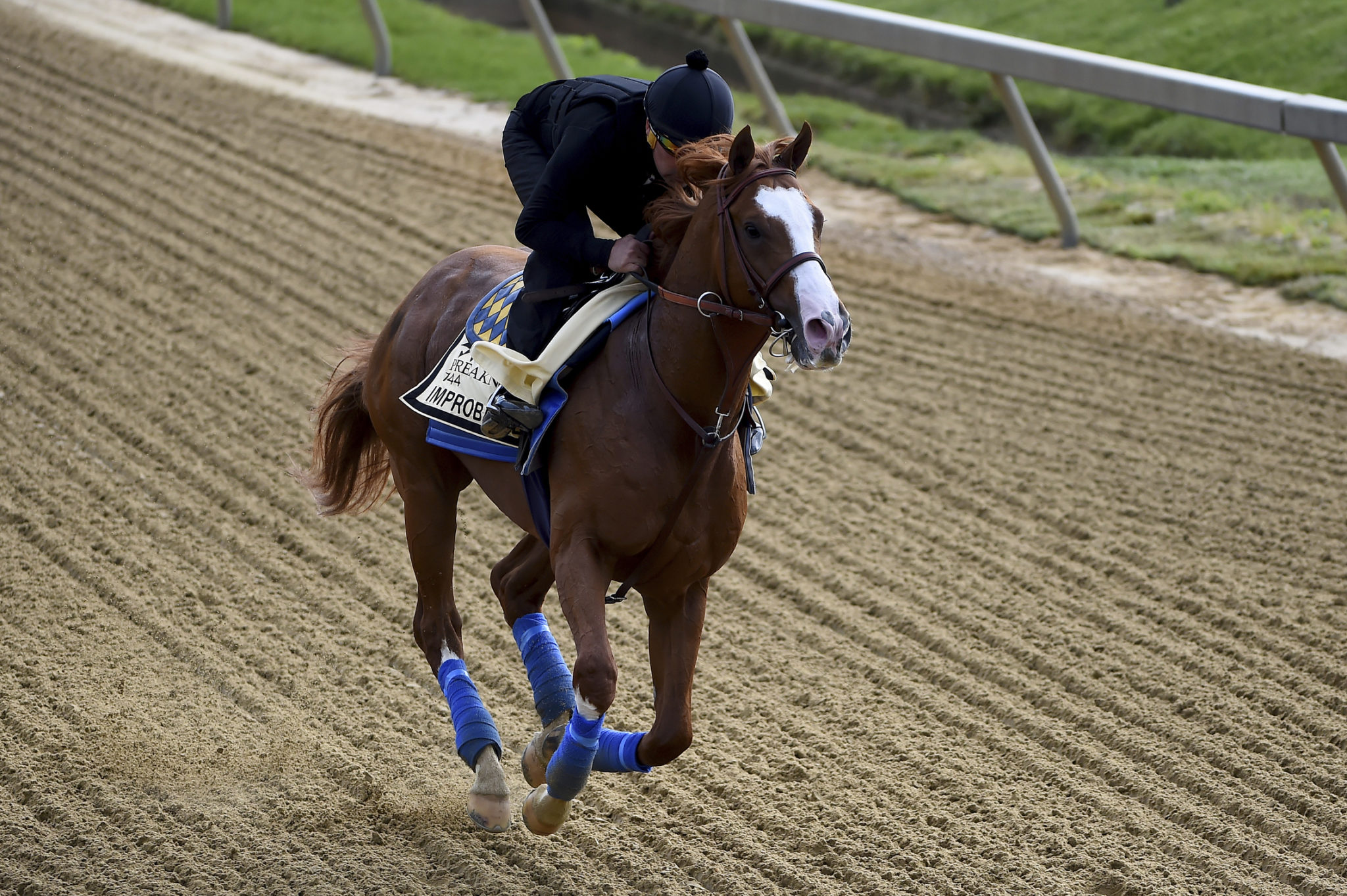 Improbable exercises in preparation for the Preakness Stakes horse race, Thursday, May 16, 2019, at Pimlico Race Course in Baltimore. The race is scheduled to take place Saturday, May 18. (AP Photo/Will Newton)

BALTIMORE — Hall of Fame trainers D. Wayne Lukas and Bob Baffert sit side by side in the corner of the stakes barn at Pimlico Race Course sizing up the Preakness.

“A lot of speed in there,” Baffert says. Lukas responds without missing a beat, “My horse is fast.”

The banter sums up this year’s Preakness.

For the first time since 1996, the Preakness doesn’t have the Kentucky Derby winner and therefore no Triple Crown possibility, but it is one of the most-wide open in recent history. Baffert-trained Improbable opened as the favorite — because he said some horse had to be favored — and without any of the first four horses to cross the finish line at the Derby, the Preakness feels like almost anyone’s $1.5 million race to win.

“It’s wide open — there’s four or five horses that can win it,” Improbable co-owner Elliott Walden said Friday. “It’s kind of like the NCAA Tournament. Just because Duke got beat, the No. 1 seed, didn’t mean they didn’t have a Final Four and it wasn’t as impactful at the Final Four.”

Unlike when Baffert brought Justify to Pimlico a year ago looking Triple Crown-caliber, this isn’t a one-horse race. Improbable and War of Will are among the legitimate contenders to become just the 19th horse all time and first since Afleet Alex in 2005 to fall short in the Derby but win the Preakness and Belmont.

Then there’s Alwaysmining, who’s looking to be the first Maryland-bred horse to win the Preakness since 1979 and make Kelly Rubley the first female trainer to win a Triple Crown race. And there are a couple of other horses who ran in the Derby to keep an eye on — Win Win Win and Bodexpress. And intriguing newcomer Warrior’s Charge, who cost owners $150,000 just to enter him, merits watching.

“The owners were pretty confident that (Warrior’s Charge) could run with these horses,” said trainer Brad Cox, who’s saddling his first two Triple Crown runners in Warrior’s Charge and Owendale. “It’s a big ask for him, but we think if you can get the right setup, he could be in the mix.”

Around the stakes barn at the historic but aging track, almost every trainer believes his or her horse is in the mix. The chance to grab an almost million-dollar first place prize even drew Dale Romans to enter long shot Everfast hours before the post position draw Wednesday, and it lured Lukas back with Market King .

Trainer Mark Hennig said not having Maximum Security, who crossed the finish line first in the Derby, or Country House who was declared the winner after Maximum Security was disqualified, helped him make the decision to enter Bourbon War. And he’s certainly not alone.

“Here’s the rule: If there’s one horse, always run. If there’s two, look at it critically. If there’s three, maybe,” Lukas said. “I’m talking about really superstar horses. Things happen to one or two horses in these races. We saw that two Saturdays ago.”

The surreal situation May 4 at Churchill Downs spurred owners to pull Maximum Security off the Triple Crown trail and sue race stewards . Country House developed a cough days afterward and was taken out of consideration, and Tacitus and Code of Honor not running means the first four horses to cross the finish line at the Derby aren’t in the Preakness.

Improbable was placed fourth after the disqualification and on paper is the best in the 13-horse field with Hall of Fame jockey Mike Smith aboard.

“He’s only stubbed his toe once in the Derby when it was a really bad racetrack and he was off the board,” said Walden, who also co-owns Justify. “That’s a tough race to win anyway. We’re looking for him to bounce back in a big way.”

Trainer Mark Casse is also counting on War of Will to bounce back after being interfered with in the Derby. Thankful his horse is OK after near-disaster , Casse isn’t so sure all the buzz around horse racing from the DQ is all that bad when it comes to drawing interest for this race.

“I’ve ran into people that know nothing about horse racing, that’s all they can talk about,” said Casse, who’s looking for his first Triple Crown victory. “We have our horse and we have horse racing and we have a big audience now that’s paying attention, so let’s take advantage of it. I may be wrong, but I think a lot of people will be watching the Preakness that normally don’t watch the Preakness.”

Lukas conceded that no Derby winner makes the Preakness a little “vanilla” but still believes it will be a great race. Ken McPeek, who trains Signalman said there are 1.5 million reasons to enter a big race like this, and he knows well after winning the 2002 Belmont with 70-1 shot Sarava.

Blaine Wright has Anothertwistafate here as the third betting choice and doesn’t quite agree with other trainers that there isn’t a superstar horse in the race.

“They could all be super horses,” Wright said. “I mean, we’re hoping ours is. You never know.”