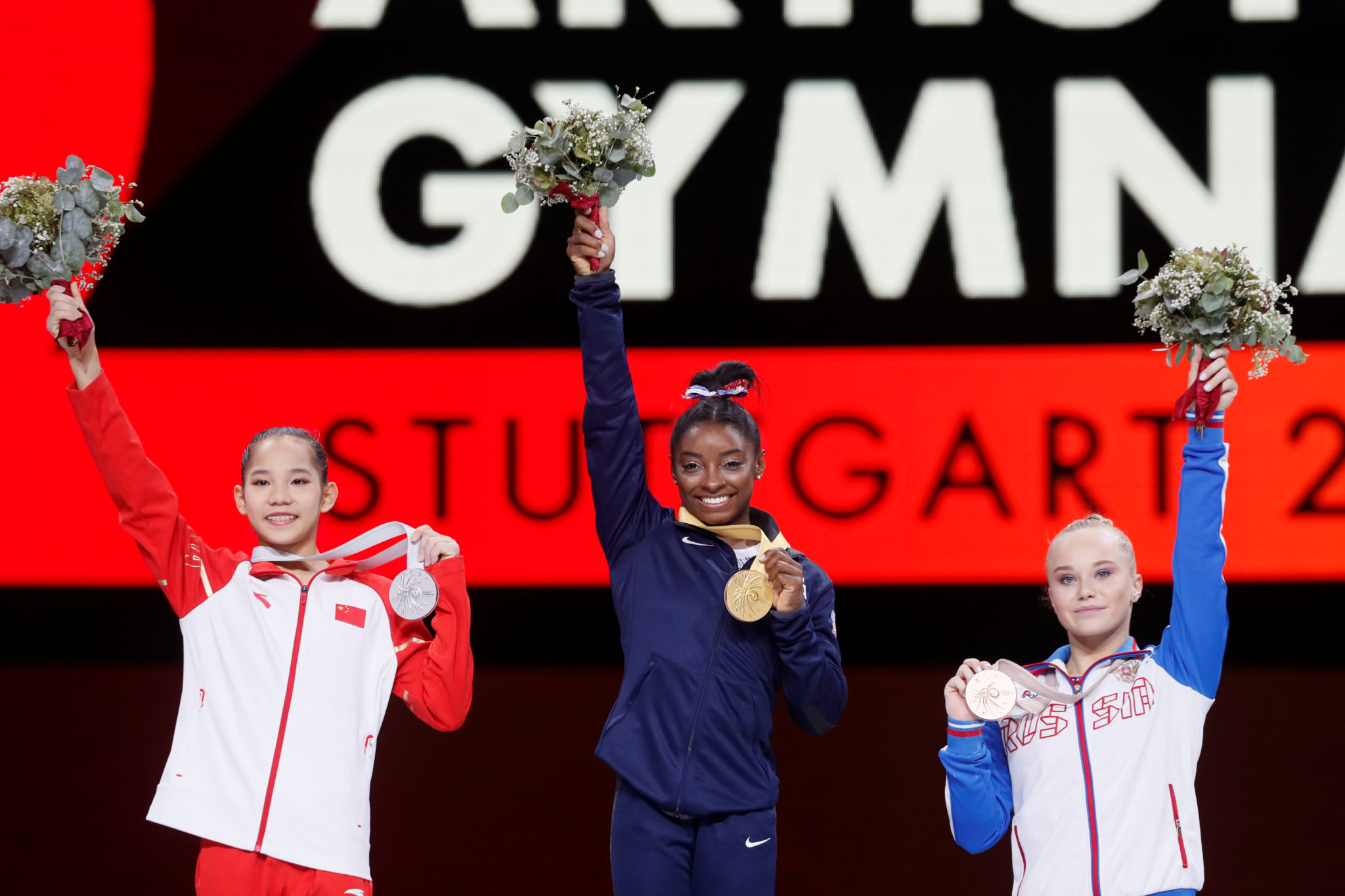 American Simone Biles became the first woman to win five all-around titles at the gymnastics world championships in Stuttgart on Thursday, building on her legacy as one of the greatest of all time.

“It means the world to me,” Biles told reporters. “For my fifth, that’s kind of unheard of so it was really exciting.

“But we finished strong and we gave it our all it’s super exciting that we had the opportunity to do this.”

Biles recorded two penalties on the floor but still managed to secure the biggest margin of victory at a world championships under the Code of Points – a scoring system that was introduced for major events in 2006.


A year ago in Doha, Biles competed with a kidney stone and started with a shocking fall on her vault routine, but there were no hiccups this time as she dictated the proceedings inside a packed arena.

The four-times Olympic gold medallist produced a massive Cheng vault, scoring 15.233 despite a 0.1 penalty for stepping out of bounds.

The second rotation saw her earn a score of 14.733 on the uneven bars, considered her ‘weakest’ apparatus, but was still enough to hand her a lead of over one point.

Biles did not perform her eponymous double-double dismount off the balance beam, a skill widely thought to be under-valued in difficulty by the International Gymnastics Federation. Yet she still finished with a leading score of 14.633 on the apparatus.

“Sometimes, I wonder how I do it,” Biles said. “I wish I could have like an out-of-body experience to witness it because sometimes I think I’m going crazy.”

It was her second world title of the week in Stuttgart, having already helped the U.S. to their fifth consecutive team title on Tuesday.

The 22-year-old is now just one short of Belarusian Vitaly Scherbo’s record haul of 23 medals – a milestone she could surpass by the end of the individual events at the championships this weekend.

Tang, making her championships debut, was not even supposed to be on the start list for the final, but went on to clinch China’s first all-around medal in eight years.

In the qualifying round, costly mistakes on the balance beam left her as the third-best Chinese in 21st place, with only the top-two gymnasts per country eligible to participate in the all-around final.

However, China decided to draft in the 16-year-old to replace captain Liu Tingting, who suffered three falls in Tuesday’s disappointing team final.

Tang responded under pressure with solid routines across all apparatus, including a near flawless set on the balance beam for 14.600 – only 0.033 off Biles’ score.