Predictions: Get ready for the 2019 Miracle Mets, Tebow-style 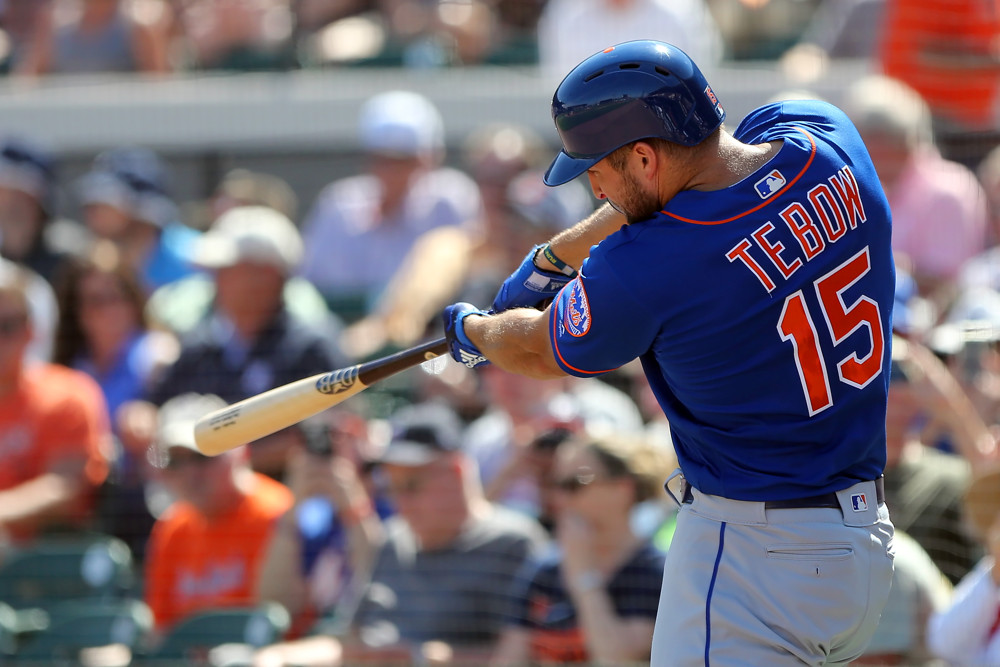 LAKELAND, FL - MARCH 01: Tim Tebow (15) of the Mets warms up while in the on deck circle during the spring training game between the New York Mets and the Detroit Tigers on March 01, 2019 at Joker Marchant Stadium in Lakeland, Florida. (Photo by Cliff Welch/Icon Sportswire)

Few would agree it’s likely to happen, but it would be highly appropriate, perhaps even miraculous, if the New York Mets’ organization claimed yet another miracle, albeit it a minor one, on the fiftieth anniversary of the 1969 “Amazing Mets,” a perennial cellar-dweller whose roster was loaded with players who spent time with the AAA Jacksonville Suns in the International League and seemingly came out of nowhere to win 38 of their final 49 regular-season games that summer to unexpectedly capture their division and defeat Atlanta for the National League pennant before beating the Baltimore Orioles in five games to win the World Series.

There’s a chance it could happen again this summer, but most likely not in the Big Apple. It might happen, however, in Syracuse — the Mets’ new AAA affiliate in the fourteen-team International League, the oldest and most storied minor league in the country.

With opening day scheduled for later today, here’s how we see the International League race shaping up.

With several former MLB players in their thirties on its roster, including two-time National League All Star outfielder Carlos Gomez and 38-year-old Rajai Davis, who stole 415 bases while playing in the majors in each of the last thirteen seasons, Syracuse boasts one of the most experienced teams in the International League. The Mets will be a legitimate contender for the North Division title and arguably have all of the pieces in place to narrowly overtake the Lehigh Valley IronPigs (84-56), the defending division champions, in what will surely be a hotly-contested division race this summer.

With right-handers Chris Flexen, Drew Gagnon and Corey Oswalt on the mound, any three of whom could be called up to the majors in an emergency situation, Syracuse also has a formidable pitching staff.

With the addition of former football star-turned-celebrity Tim Tebow, who hit .273 and blasted six home runs last season at AA Binghamton before injuring his hand, the excitement in Syracuse is palpable and the inaugural Mets — the Syracuse Chiefs were formerly affiliated with the Washington Nationals — won’t let their fans down.

The Mets open the 2019 season at home this afternoon against Pawtucket, the Triple-A affiliate of the Boston Red Sox. Mike Shawaryn, who played college baseball at Maryland, is expected to be on the mound for Pawtucket, which finished third in the North Division last year, 2 ½ games ahead of Syracuse.

Without much speed in the lineup, Lehigh Valley will have difficulty repeating its phenomenal 84-win season of a year ago. With a solid pitching staff and a top-tier bullpen, the IronPigs will nevertheless be difficult to overtake in the North Division, but several of the projected starters in their six-man rotation, including left-hander Cole Irvin — the IL’s 2018 Most Valuable Pitcher — could be called up by the Phillies during the course of the season, thereby weakening the team’s most obvious strength. We expect a photo-finish between Lehigh Valley and surprising Syracuse in the North Division.

With a somewhat weakened bullpen — two of their relief pitchers were traded and two others moved up to the majors — the RailRiders will have a difficult time making the playoffs this season. However, with outfielder Clinton “Red Thunder” Frazier, a top prospect for the 2013 MLB Draft who missed part of last season with a concussion, apparently healthy and back in the lineup and the possibility that infielder Tyler Wade, who was called up by the Yankees a few days ago, will spend at least part of the season in Scranton-Wilkes Barre, it would be a mistake to completely rule the RailRiders out this year.

With an extremely young squad featuring a plethora of newcomers who’ve never faced Triple-A pitching, it’s hard to imagine that Buffalo can finish better than fourth in the highly-competitive North Division, but look for Bobby Meacham’s club, nipping at the heels of the league leaders, to improve dramatically by mid-season as several players from last year’s Double-A New Hampshire championship team move up to the International League.

Despite a veteran outfield and a nice mixture of hurlers in the bullpen who have experienced some MLB action, the Red Sox will likely finish in the bottom tier of the IL’s North Division, largely due to a glaring lack of experience in their starting rotation.

Lacking depth and experience, runs could be hard to come by for the Red Wings this year. After spending the past three seasons playing professionally in Korea and Japan, former Colorado Rockies catcher Wilin Rosario, however, could add some much-needed offensive punch for Rochester. Rosario, who finished fourth in the National League’s Rookie of the Year voting in 2012, hit 28 home runs while driving in 71 runs in 2012 and hit 21 long balls and 79 RBI for the Rockies the following season.

Along with second baseman Kevin Kramer, who batted .311 last season — the third highest average in the league behind Pawtucket’s Rusney Castillo and Lehigh Valley’s Joey Meneses — three highly-touted and talented new infielders give the Indians arguably the best infield in the entire International League. Coupled with a solid starting rotation and a high-speed bullpen, there’s enough talent for Indianapolis to finish ahead of everyone else in the West Division, where only a half-game separated the top three teams last year.

Like Indianapolis, the Clippers came within a half-game of winning the West Division last season. They’ll probably fall short again this season, but it will probably be a pretty close divisional race again. Columbus has a number of players who can knock it out of the park, including powerful first baseman Bobby Bradley and catcher Eric Haase, who hit 20 home runs last season, but the lack of a lefty in the starting rotation could be a problem for the Clippers.

Toledo has quite a few familiar faces returning this season, but the Mud Hens will be playing with a target on their back, having finished a half-game ahead of both Indianapolis and Columbus in the West Division last season. Led by centerfielder Daz Cameron, the 22-year-old son of longtime major leaguer Mike Cameron who impressed everyone earlier this spring, Toledo could conceivably repeat, but it will be mighty difficult when everybody’s gunning for them.

Coupled with a pretty decent infield led by slick-fielding shortstop Blake Trahan, outfielder Mason Williams — a 2018 International League All-Star — and an array of veterans with big league experience, including 34-year-old journeyman Hernan Iribarren who is returning for a sixth and final season with the Bats as a player-coach, Louisville should be vastly improved this year, but probably not enough to seriously compete for the division crown and its first playoff appearance since 2010.

Impressively, Louisville is the only team in the International League with an entire coaching staff with ten or more years of experience in the major leagues. Manager Jody Davis, hitting coach Leon Durham, pitching coach Jeff Fassaro, and bench coach Dick Schofield have a combined 50 years of major league experience between them.

A strong pitching staff — a trademark of Tampa Bay, which loves to stockpile arms for every conceivable occasion — led by lefty reliever Colin Poche should compensate for a lack of team speed and enable the two-time defending Governors’ Cup champions to prevail once again in the IL’s South Division. The Bulls have 16 players returning from last year’s regular season or postseason rosters. Having won the division be nine games last season, they’ll certainly be difficult to dislodge.

Almost exclusively focused on pitching, Gwinnett could have a difficult time scoring runs this season. Third baseman Austin Riley, who was drafted by the Atlanta Braves as the 41st overall pick in the 2015 Major League Baseball Draft and moved up to the Triple-A ranks last May, and catcher Alex Jackson will likely provide the Stripers with whatever offensive punch they can muster, but it won’t be enough for the Atlanta-area club to seriously challenge Durham in the South Division.

With an improved pitching staff — one of its true strengths, anchored by highly-touted Dylan Cease — Charlotte should be more competitive this season. As Chicago’s top pitching prospect, Cease went 12-2 last year with a 2.40 ERA and 160 strikeouts at Class A Winston-Salem and AA Birmingham. The Knights should be fun to watch, especially with 32-year-old veteran shortstop Alcides Escobar in the lineup.

Escobar’s eleven-year MLB career included hitting an inside-the-park home run in the World Series for the Kansas City Royals in 2015.

Catcher Chance Sisco, who played in 63 games for the Baltimore Orioles in 2018, should give the Tides a huge lift behind the plate. The 24-year-old, who signed with Baltimore in 2013 rather than play collegiate baseball at the University of Oregon, cracked four home runs while batting an impressive .382 for the Orioles in spring training this year. He’s a quality player. On the other hand, there’s a really good chance he’ll be called up by the Orioles at some point, probably sooner than later.

Keep in mind, too, that first-year manager Gary Kendall, who has been with the Baltimore organization for twenty years, knows how to win, having established the club’s all-time record with 570 wins while leading AA Bowie to three postseason appearances in eight seasons.