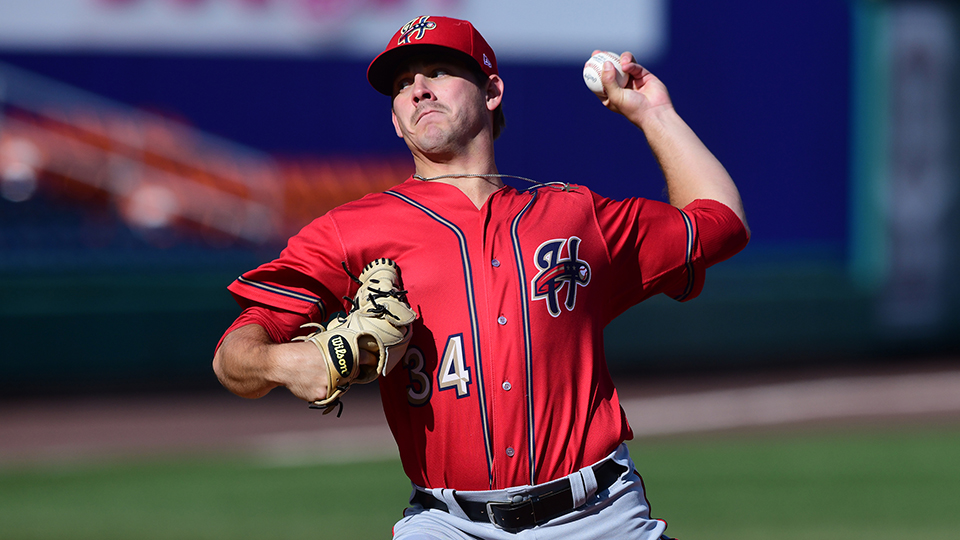 The Double-A Eastern League nearly witnessed its sixth no-hitter of the season on Wednesday night as Harrisburg’s Ben Braymer hurled a no-hitter through eight innings in a 1-0 extra-inning loss to Richmond.

The left-handed Braymer, the No. 23 prospect in the Washington Nationals organization, didn’t allow a base hit through a career-high eight innings while striking out seven and issuing just one base on balls — a walk to the Flying Squirrels’ Zach Houchins with one out in the second.

The 25-year-old Braymer, who pitched for Auburn during his collegiate career, retired twenty straight hitters in his career-long outing on Wednesday before being relieved by right-hander Bryan Bonnell (1-1), who was tagged with the loss for Harrisburg after giving up just one hit — a game-winning RBI single in the tenth.

Braymer’s no-hitter was carried into the tenth inning when Richmond’s Jalen Miller stroked the game-winning single to left field with one out, scoring the automatic designated runner on second base.

If Braymer’s hitless gem had held up it would have been the second no-hitter thrown by Harrisburg pitchers this season — right-hander Erick Fedde and relief pitchers Jordan Miller and Aaron Barrett combined for a no-hitter against Bowie at Prince George’s Stadium on April 6 — and the sixth in the Eastern League this season.

It also would have been the league’s first extra inning no-hitter since 1982.

The Eastern League has been something of a hitless wonderland this year.

Erie’s Alex Faedo, who threw seven hitless innings, and 23-year-old right-hander Drew Carlton combined on a no-hitter in the SeaWolves’ 4-0 victory over Bowie at Erie’s UPMC Park on April 24th.

A day later, Portland left-hander Kyle Hart and two other Boston Red Sox prospects — relievers Daniel McGrath and Adam Lau — combined for a no-hitter in a 2-0 win against Binghamton.

The league’s fourth no-hitter this season was recorded four days later, on April 29th, when Erie’s Casey Mize — throwing 98 pitches in nine innings — tossed a gem against Altoona in his Double-A debut. Mize, another Auburn product, had also hurled a no-hitter in college in a 6-0 win over Northeastern in March of 2018.

The Eastern League’s fifth no-hitter occurred on May 8th when 24-year-old Binghamton right-hander Harol Gonzalez and reliever Ryder Ryan combined on a hitless outing in a game against Portland. It was Binghamton’s first no-hitter in thirteen years.