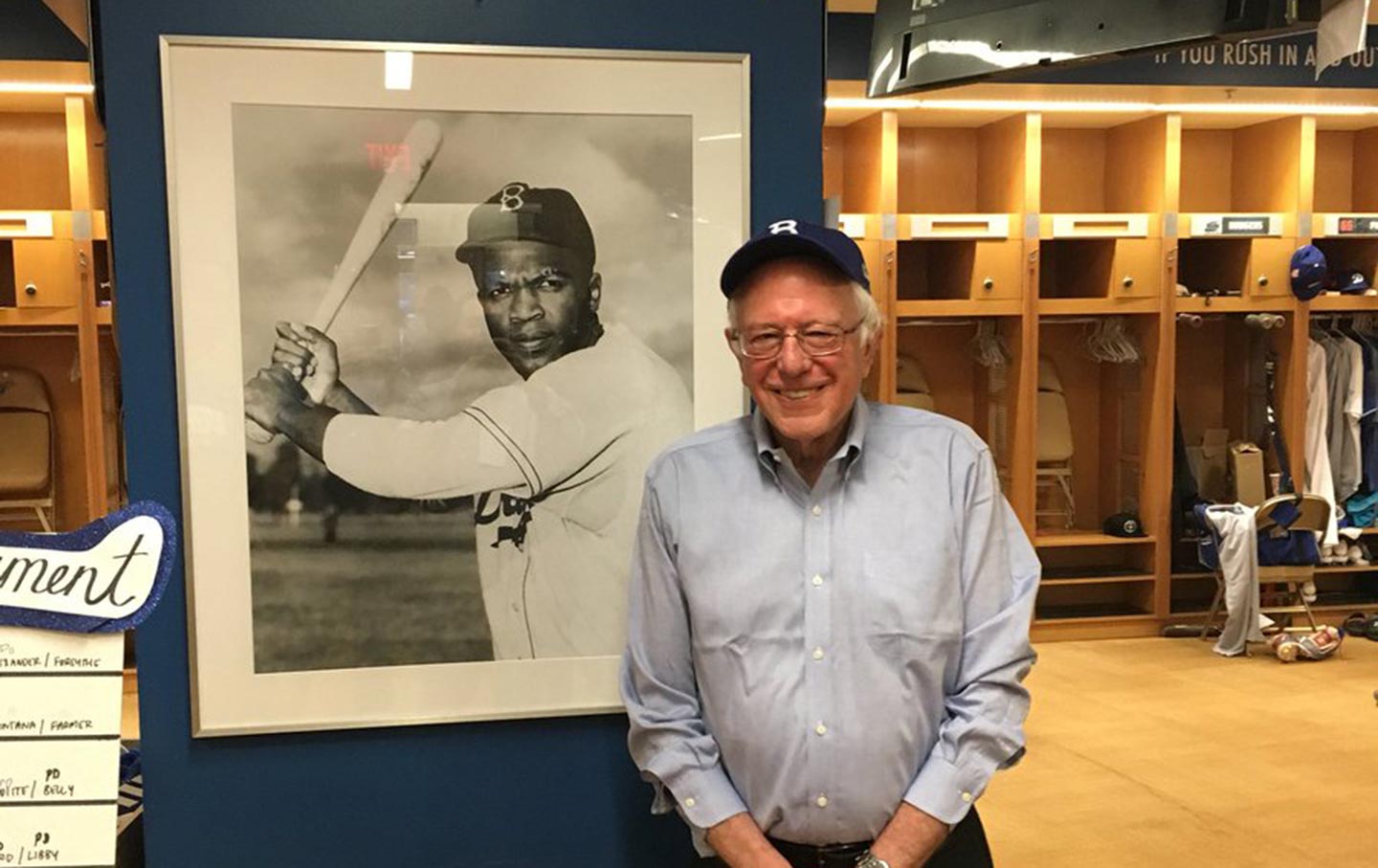 When Walter O’Malley abruptly moved the Brooklyn Dodgers to Los Angeles in the autumn of 1957, many longtime fans were heartbroken. Among the most disappointed and saddened was Bernie Sanders, a young teenager who was as devoted a Dodgers fan as anyone.

When he could scrape together the sixty cents for admission, the young Sanders would frequently cheer on his beloved Dodgers at nearby Ebbets Field, which was within walking distance of his parents’ apartment in the Flatbush section of Brooklyn.

Many of those closest to the Democratic presidential candidate believe that O’Malley’s decision to suddenly uproot the Dodgers helped shape the Vermont senator’s lifelong views on wealth and corporate greed.

The Dodgers, after all, belonged to Brooklyn.

Though losing his beloved boyhood team, Sanders maintained a strong interest in baseball and after winning the Burlington mayoralty in 1981 vowed to bring a minor-league baseball team to Vermont’s most populous city.

Despite a series of setbacks and disappointments during his first few tumultuous years as mayor in the early 1980s, Sanders was delighted when Burlington finally landed a professional baseball team in 1983 — something he had pursued since first taking office.

In late 1981, the city lost out in a bid to acquire the Holyoke Millers, a double-A franchise then affiliated with the California Angels. The Holyoke team had won the Eastern League championship in 1980.

A special committee headed by University of Vermont professor Huck Gutman, a close friend of Bernie’s who coincidentally had also been a diehard Dodgers fan while growing up in Queens, had planned to sell subscriptions at $100 per share to purchase the Massachusetts-based franchise, but the team’s new owners — a group of Amherst investors — eventually opted to keep the team in Holyoke.

Needless to say, Sanders was disappointed, but remained determined to bring minor league baseball to Burlington.

Bernie’s persistence paid off a few years later when the city lured a Cincinnati Reds farm team from Waterbury, Connecticut, to Burlington.

Long associated with minor league baseball, Mike Agganis owned the Lynn Pirates, a Pittsburgh Pirates AA farm club — the team Sanders initially tried to bring to Burlington after the Holyoke effort failed. Agganis, a nephew of former Boston Red Sox first baseman and Lynn native Harry Agganis, who died suddenly of a pulmonary embolism during the 1955 season, was anxious to find a new home for his team.

The Lynn franchise, existing in the shadows of Fenway Park in Red Sox country, never drew particularly well in that Boston suburb — drawing a paltry 23,791 in 1982 and 31,575 in 1983 — despite being an Eastern League contender.

Bernie and Agganis hit it off superbly.

However, after signing the deal to move the Lynn franchise to Burlington, the Pirates’ ownership, which initially approved of the move, had second thoughts and leaped at an opportunity to move their AA team to Nashua, New Hampshire, when the California Angels contract there expired. Nashua had attracted 138,000 fans to its home games the previous season — an impressive figure by AA minor-league standards — despite winning only 60 of 140 games and finishing in sixth place.

“From a business and professional standpoint, Nashua is a great site for us,” explained Tom Kayser, the Pirates’ assistant director for minor league baseball. “The Nashua owners wanted a long-term deal and we also wanted something stable, so it was kind of natural.”

Despite that disappointing setback, Sanders reassured his constituents that Burlington would have a team. “There’s no chance we will be without a baseball team,” said the mayor. “Our job was to bring AA baseball to the city of Burlington. We have no allegiance to any particular team. The Pirates have a very good farm system and it would have been nice to have been affiliated with them, but it really makes no difference to us which team we have.”

Agganis concurred and also tried to reassure disappointed Vermonters. “I tried to tell everyone that there was no guarantee that the Pirates were coming,” he said. “Everybody up there kept insisting it would be the Pirates, but I told everybody minor league baseball doesn’t work that way.”

Most minor league teams were privately owned. The parent major league teams agreed to furnish their affiliates with ballplayers while agreeing to pay a portion of their salaries, according to the terms of the Player Development Contract.

Much to the mayor’s delight, Agganis quickly persuaded the Cincinnati Reds to move their AA team from Waterbury to Burlington before the start of the 1984 season. It didn’t take a lot of convincing on his part since the Reds were deeply dissatisfied with their Waterbury affiliate and were anxious to move.

Sanders, who cheered wildly for the Reds during their four-year stint in the Queen City, threw out the first pitch in the home opener before a sellout crowd during the team’s inaugural season.

Bernie had delivered big time in bringing minor-league baseball to Burlington, but there were many in the business community who couldn’t bring themselves to give the mayor any credit for his achievement, steadfastly refusing to acknowledge or support any endeavor that might have made him look good.

“There are people now who won’t give Bernie credit for bringing that baseball team here,” remarked a local businessman who was instrumental in raising private funds to renovate Centennial Field to meet the eight-team Eastern League’s requirements.

The appropriately-named Vermont Reds — reporters, as one might imagine, had a lot of fun with that —played their home games at the University of Vermont’s recently-renovated Centennial Field. The ballpark, built in 1903, had recently been given a $250,000 upgrade that included new lighting, an eight-foot fence to comply with Eastern League requirements, new seating, a state-of-the-art press box, and a sparkling new $100,000 forty-foot high scoreboard.

The Reds franchise prospered in Burlington, selling more than 400 season tickets before the beginning of the 1984 season. The team occasionally drew crowds of about 5,000 — not too shabby for a class AA franchise.

With baseball being a novelty, the Reds drew a fairly impressive 121,112 fans to the ballpark during their first season in Burlington and a modest 90,478 and 77,559 in 1985 and 1986, respectively. Even with the decline in subsequent years, Burlington’s attendance figures were high enough to place the Vermont Reds among the league leaders.

Burlington’s residents were treated to some pretty good ball players, too. Ken Griffey, Jr., shortstop Barry Larkin, Omar Vizquel, two-time All Star Rob Dibble, relief pitcher Norm Charlton and right fielder Paul O’Neill were among those who played for Burlington’s AA team at one time or another during that period.

Though never winning the regular season title, the Reds captured the Eastern League championship during each of the first three years of their four-year stay in Burlington. Incredibly, they nearly won four straight Eastern League crowns, but lost the 1987 championship series to the Harrisburg Senators.

In 1988, the team’s parent club, the Cincinnati Reds, moved the franchise to a warmer climate.

The Vermont Mariners, the Seattle Mariners’ AA franchise, took their place, but lasted only one season before Agganis, who had a rocky relationship with Burlington’s business community, moved the franchise to Canton, Ohio.

As though haunted by the ghost of Walter O’Malley, Bernie was disappointed and heartbroken once again. But it was fun while it lasted.