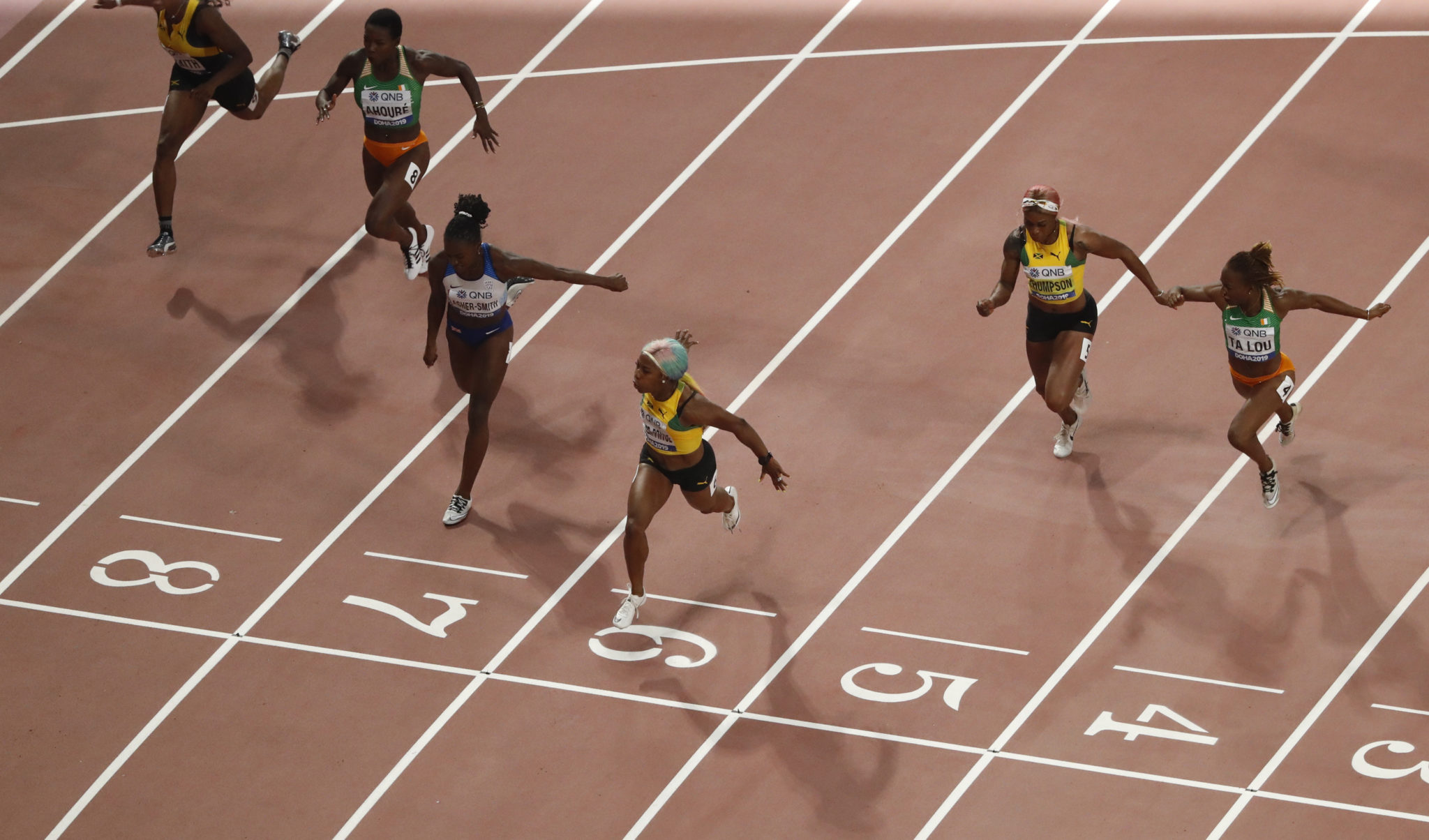 Jamaica’s Shelly-Ann Fraser-Pryce powered her way to 100 meters gold on Sunday to become the first person to win four gold medals over the distance at the athletics world championships.

Fraser-Pryce, who returned to the track in earnest only last year after giving birth to a son, stormed across the line in a season-best time of 10.71 seconds followed by Britain’s Dina Asher-Smith in 10.83.

The victory cemented Fraser-Pryce’s status as one of the all-time great sprinters, with her four world titles going alongside Olympic gold won in 2008 and 2012 and perhaps more to come at the 2020 Tokyo Summer Games.

The 32-year-old Jamaican now stands alone in terms of the world championships where her four titles are one better than her compatriot Usain Bolt and Americans Carl Lewis and Maurice Greene.


“Standing here having done it again, holding my baby, is a dream come true,” said Fraser-Pryce, who had switched from the yellow dyed hair she sported in the heats to a multi-colored style for the final. “I had no sleep last night.

“Last time I was at a major championship was 2016 and I just could not sleep with nerves,

“But with mental toughness you will get what you want.”

The only disappointment about the race was that once again there was a shockingly sparse crowd at the 40,000-capacity Khalifa Stadium to watch the world’s top sprinters perform.

With the upper sections of the stadium covered in signage and only the lower bowl open for spectators, there were still more empty seats than occupied ones even on a night when five gold medals were on offer.

By the time the women sprinters hit the track for their race, the last of the night (11.20 PM local time), the stadium had almost emptied.

Letting out a mighty scream as she crossed the line Fraser-Pryce wrapped herself in the Jamaican flag then found her son Zyon, who was soon asleep on her shoulder, as she took a victory lap around the vacant stadium.

“I can’t believe it, I worked so hard to be back,” said Fraser-Pryce. “Zyon and my husband have been my strength.

“When everybody else doubted me, they never did.”

After a lavish pre-race production for the benefit of the small crowd the sprinters settled in their blocks and when the gun went off there was little doubt that Fraser-Pryce would be adding to her golden haul as she left Asher-Smith in her wake.

The silver was the first medal for a British woman in the 100m since Dorothy Hyman at the 1960 Olympics.

“A PB (personal best) and a national record, that is more than I could have ever asked for in a world championship final,” said Asher-Smith. “I’d have loved to win today but Shelly-Ann ran a superb race, that’s why she is the champion she is.”

The results confirmed that Jamaican women have taken over the mantle of global sprint superpower from their men whose dominance has been in decline since the retirement of 100 and 200m record holder Bolt, who is not competing at the worlds for the first time since 2003.