New XFL is focused on football, not sexy cheerleaders 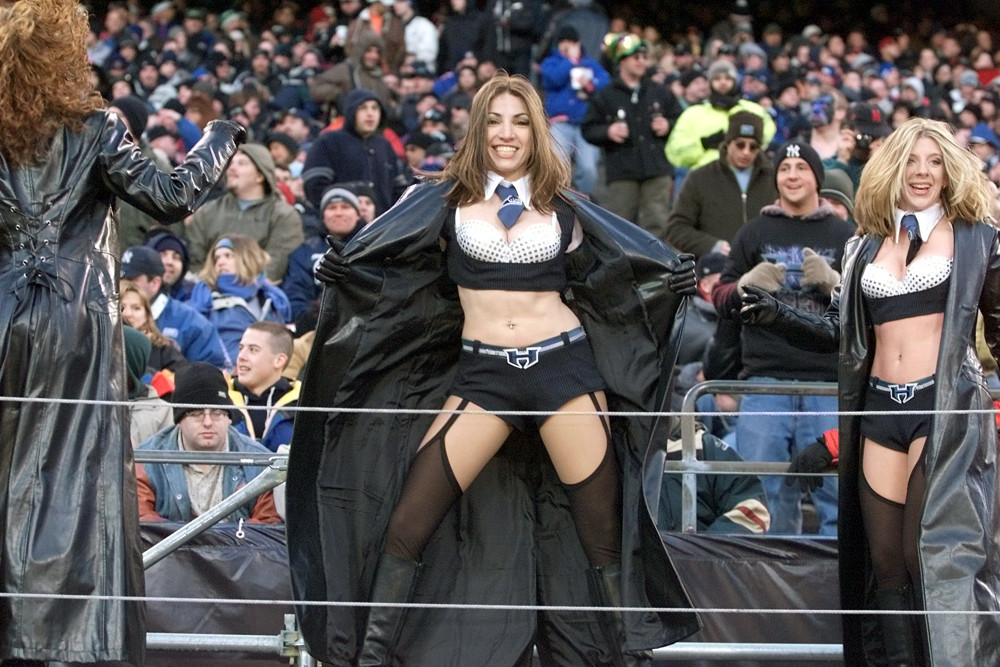 11 Feb 2001: Members of the NY/NJ Hitmen cheerleaders, the Hitladies, perform during the Hitmen's 19-12 loss to the Birmingham Thunderbolts at Giants Stadium in East Rutherford, NJ.

Eighteen years ago, when Vince McMahon talked about the first version of his pro-football league, he continuously boasted that his league would have the best cheerleaders. He insisted that football and cheerleaders belonged together, and that the cheerleaders should have a greater role in the game day product.

Of course, other sports leagues are no strangers to promoting the sex-appeal of cheerleaders, but the 2001 version of the XFL packaged and sold the cheerleaders as sex objects.

At one point, in an interview with ESPN The Magazine, McMahon even made the outlandish claim that players would date the cheerleaders, and the fans would know if they were doing the “wild thing.”

“Yes, our cheerleaders will date our players,” McMahon said. “Yes, they’ll be hot babes … We’re going to have three or four of them surround our announcers — who’ll be sitting in the stands, by the way… then, when the quarterback fumbles or the wideout drops a pass — and we know who he’s dating — I want our reporters right back in her face on the sidelines demanding to know whether the two of them did the wild thing last night.”

In an era that brought us reality television, Vince McMahon, the master showman, was willing to take things as far as anyone could imagine and put the cameras in places they had never gone before.

The XFL cheerleaders were a key part of this plan.

On game day, the cheerleaders were normally not found on the field. They were featured on specially constructed platforms situated within the stands, right where the hungry eyes of the fans could get a good look at them. A large crowd of men usually surrounded the cheerleaders’ location.

Why would a woman sign up to be an ogled at by strange men? Bonnie-Jill Laflin, a cheerleader with the XFL’s Los Angeles Xtreme, revealed, “I decided to do the XFL because for me it was great exposure and I hoped it would help with my sports broadcasting career. But what they have shown so far on national TV is girls looking like strippers, and it looks like we may not get all the breaks we thought we would get.”

Clearly, not everyone enjoyed cheerleading for the XFL.

Unfortunately for Vince McMahon, using cheerleaders to garner attention for his league didn’t always go well. In what is now billed as the “worst halftime football stunt in history,” McMahon sent a cameraman into the Orlando Rage Cheerleaders’ locker room.

When fans realized it was a WWE-style scripted scenario, it fell as flat as a pancake… despite the fact it featured a cameo by a towel-clad Rodney Dangerfield.

Even Rodney’s popularity couldn’t save the day, and this debacle is now how many remember the XFL.

When it comes to XFL cheerleaders in 2020, we will see a complete one-eighty. When Vince McMahon relaunched the league in January 2018, he said plainly, “There will be no cheerleaders.”

This is a far cry from talking about “the wild thing.”

In trying to create a new XFL that is all about “better football,” McMahon is now using a lack of cheerleaders as a wedge, just to prove how serious he is about cleaning up his league.

Recently, in an XFLBoard Discussion, user Tank55 nailed it:

“I think dropping the cheerleaders entirely was a really easy, clean way to separate yourself from the worst parts of the old XFL, especially considering today’s climate. You don’t have to waste any effort of explaining how 2020’s cheerleaders would be presented differently than in 2001.”

So, it’s a brand new XFL, and the lack of cheerleaders proves it!

So far, as shown in the results of a recent XFLBoard Twitter poll, fans seem to be in agreement with the plan to shelve the cheerleaders. However, the result is clearly not a landslide.

We will see what happens next February, when the players hit the field. How many fans will be disappointed by the absence of the infamous XFL cheerleaders?

We hope, eighteen years later, a grown-up Chris Wright is not too disappointed when he discovers the XFL Cheerleaders he once coveted are no longer part of the game day experience.

Mark Nelson is a rabid football fan and has been the founder/owner of XFLBoard.com since April 2000. He is happy to see the XFL come back for a second go around the buoy.