Singletary’s Express crash and burn in crushing loss to Orlando 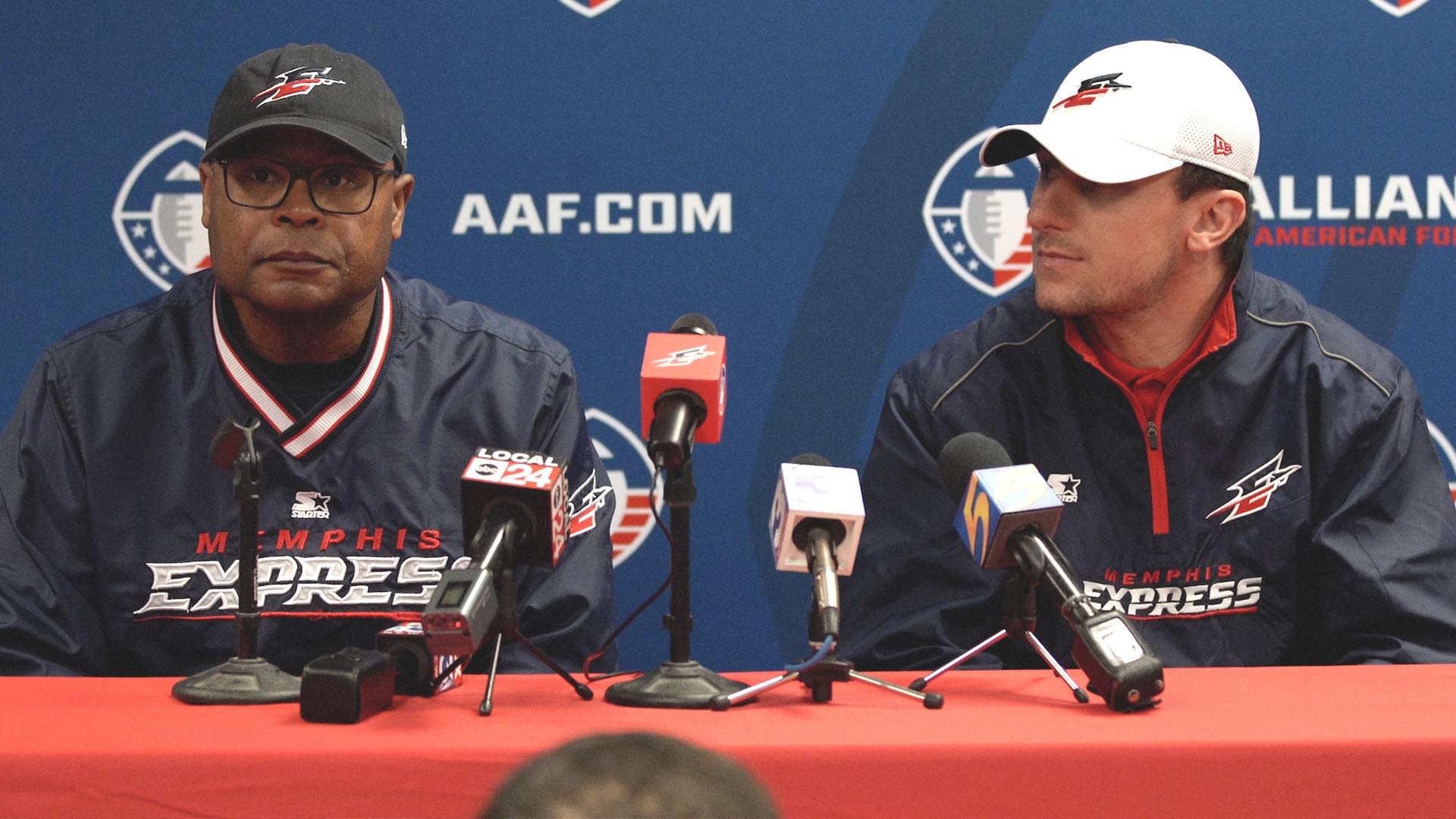 The NCAA’s “March Madness” is best known for Cinderella stories and dramatic upsets, but the AAF nearly had an impressive upset of its own on Saturday afternoon when the Memphis Express faced off with the Orlando Apollos.

The game was expected to be a nearly unwatchable blowout as the Express were considered to be outmatched in every possible way, but Memphis wasn’t buying the Orlando hype.  Perhaps some of the early Memphis success could be credited to quarterback Johnny Manziel, who made his first AAF start Saturday and seemed to give the offense a much needed spark.

After an early Orlando field goal, the Memphis offense marched down the field and scored on a 31 yard Manziel pass. The touchdown, however, wouldn’t stand due to an offensive pass interference penalty which moved the Express back.

A defensive penalty gave Memphis new life, and the Express entered the red zone moments later courtesy of a Kenny Hilliard run.  The drive would suddenly end as disaster struck for the offense moments later. On 1st and goal from the 8, a Johnny Manziel pass was tipped and intercepted by Orlando defender Will Hill III, who advanced the ball 23 yards.

The turnover was the least of Memphis’ problems as quarterback Johnny Manziel was injured on the play.  It was later revealed he suffered a concussion while trying to tackle Will Hill during the interception return.  Manziel would not return to the game which gave last week’s starting quarterback, Brandon Silvers, another chance to lead the offense.

Despite the change at quarterback, the Express continued to hang with the explosive Orlando squad as the first quarter ended with the Apollos still ahead 3-0.

The two teams would trade field goals early in the second quarter to make the score 6-3.  Memphis would add another Austin MacGinnis field goal to tie the game at 6 later in the second.

The Apollos put an end to the frenzy of field goals with 1:55 remaining in the first half when running back D’Ernest Johnson beat the Express defense to the corner of the end zone.  The conversion was successful as it was D’Ernest Johnson who again found the end zone to put Orlando up 14-6.

The Express would add a third field goal before halftime to make the score 14-9.

The second half saw the Memphis Express find their stride.  Running back Terrence Magee scored on a short touchdown run midway through the third quarter and later the defense got involved.  A 1st and 10 for Orlando from their own 20 yard line brought a Garrett Gilbert fumble that was recovered by Memphis defensive lineman Cory Crawford and returned for a touchdown.

The third quarter ended with Memphis ahead 23-22.

The teams would trade touchdowns in the fourth quarter to make the score 31-28 in favor of the Express with under three minutes remaining in the game.  Then, with the rain falling and wind blowing, disaster struck again for Mike Singletary’s team.

On a 4th and 8 from their own 42, Memphis punter Ryan Winslow fumbled a snap inside his own 30 yard line.  The ball slipped right through Winslow’s hands in the soaking conditions. The ball was recovered by Memphis, but because it was 4th down, Orlando assumed control at the Memphis 26 with 2:34 remaining.

It was at this point the Memphis implosion reached its peak.

With 2:02 remaining, the Apollos faced a 3rd and 5 from the Memphis 20 yard line.  While Garrett Gilbert attempted to communicate with his teammates, it appeared the play clock expired which should have resulted in a delay of game penalty.  No such penalty was called, the ball was snapped, and Orlando running back D’Ernest Johnson advanced the ball inside the 5. This did not sit well with Memphis head coach, Mike Singletary.

Singletary, in an attempt to plead his case that the play clock had expired, could be seen standing near the numbers arguing with an official while the play took place.  One of the television announcers commented during the broadcast, “Look at Mike Singletary! He’s ready to make that tackle!”

Singletary was penalized, as was an Express assistant coach.  Singletary then called a timeout (Memphis’ first of the half) to further argue with the officiating crew.  The lost timeout would prove costly, as would Singletary’s outburst, as his frustration seemed to spread to his team who quickly lost control of their emotions following the bizarre series of events.

When everything was sorted out, the Apollos had a 1st and goal on the Express 1 which allowed running back De’Veon Smith to find the endzone.  The conversion was no good, but the Apollos were in front 34-31 with only 1:36 remaining in the game.

The lack of focus and mental toughness continued to plague Memphis on their ensuing drive.  On 1st and 10, Apollos defender Leon Orr committed a horse collar tackle against Memphis running back Terrence Magee which should have been a free 15 yards for Memphis.  However, Memphis offensive lineman Toby Weathersby blindsided Orr well after the whistle which resulted in a penalty on Memphis.

Foolish, boneheaded plays like these have, sadly, become quite characteristic of the Express players and coaches.

The Apollos ran the ball on 1st and 2nd down which forced Memphis to use their final two timeouts. Another run on 3rd down and 3, brought up a 4th and 2.  At this point, it would again be a foolish, boneheaded play that sealed Memphis’ fate.

Garrett Gilbert utilized a hard count on a 4th down where the offense almost certainly did not intend to run a play.  The cadence drew defensive lineman Julius Warmsley offsides which resulted in a first down, and a victory, for Orlando.

After the game, Spurrier and Singletary had very different reflections on the game and their teams.

Spurrier was quoted as simply saying, “I’m proud of our team hanging in there. It could’ve gone either way.”

Singletary on the other hand, seemed to vent some frustration that he showed at the end of the game.  He said, “I don’t really have a whole lot to say. Our guys fought hard, came up short. I wish we would’ve been allowed to play the game. We were not. Words cannot express how disappointed I am for our guys. This was a pivotal game for us.”

Memphis falls to 2-6 with the loss and is out of the playoff conversation, while Orlando advances to 7-1 and is the frontrunner in the AAF’s East Division.

Alaric Huls currently works as a Social Studies teacher at Medford Area Senior High School, in Meford, Wisconsin. He graduated from the University of Wisconsin - Eau Claire in December of 2015, and enjoys hunting, fishing, and spending time with his wife.