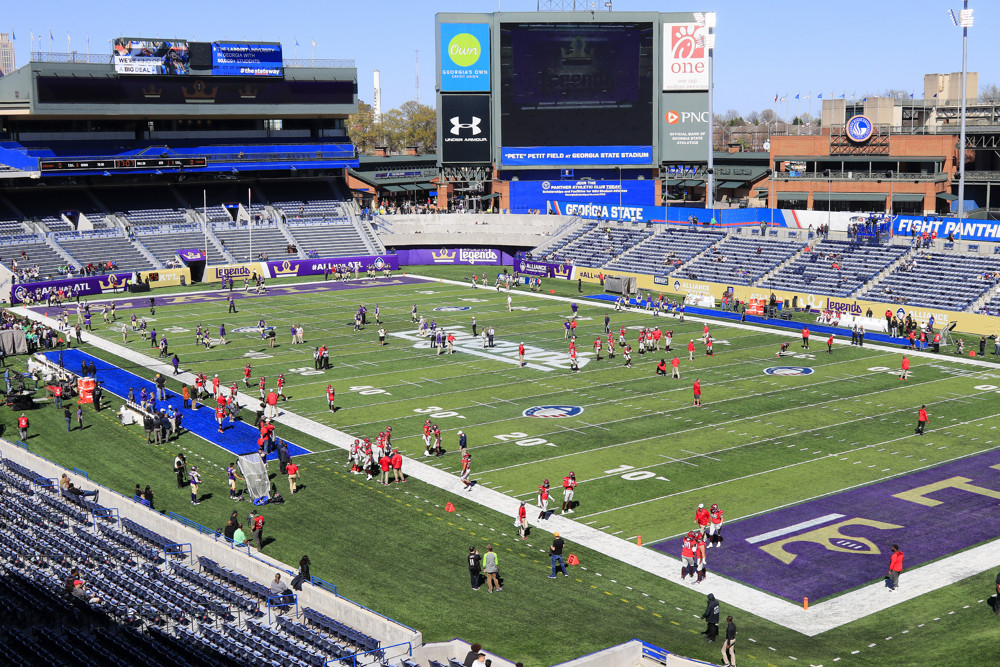 ATLANTA, GA - MARCH 17: Team warmups on the field prior to the AAF game between the Atlanta Legends and the San Antonio Commanders on March 17, 2019 at Georgia State Stadium in Atlanta, GA. (Photo by David John Griffin/Icon Sportswire)

Charlie Ebersol was sure his new football league was different, even as it ventured into the dark hole that had swallowed up ventures like his before.

I talked to him in November, before uniforms had even been ordered and one game had aired. The Alliance of American Football league was well financed and for real, he said, and ready to put on a show for a country supposedly starved for more football.

“There is a massive amount of people in this country who watch only one sport on television and that league (the NFL) only plays a set period of time,” Ebersol said. “They stop watching sports on TV the day after the Super Bowl and don’t come back until the NFL returns.”

It all sounded good, maybe too good. Ebersol talked about television contracts, 50 people already working on technology alone in the league’s San Francisco office and a gambling deal with MGM Resorts that would take advantage of the explosion in sports betting around the country.

Turns out Americans weren’t all that hungry for spring football, at least the second-tier product put on the field by the AAF. The market for minor league spring football was minuscule, if not nonexistent.

And a league that claimed to have learned from the past will become another case study for those in the future.

The WWE chief honcho plans to unveil the latest pro football league next spring under the banner of the XFL, another failed league. According to published reports, McMahon recently sold $272 million worth of WWE stock to fund the effort and plans to invest as much as $500 million to keep it going in its formative years.

Big money, and even bigger plans. For less than the price of an NFL franchise, McMahon envisions owning an entire league.

But will he build one that people care about enough to actually watch? Well, as I pointed out in November after talking to Ebersol, the track record says no.

A look in the stands at any of the AAF games should make any potential investor — or player — in a new league cautious. A look at the television ratings should send them fleeing to the next big thing somewhere else far, far away.

The AAF wasn’t exactly a grand experiment, no matter what its founders said. Recent history is littered with leagues like the USFL, XFL and WFL that launched to great fanfare only to go under amid fan indifference and financial sinkholes.

Spring football doesn’t work, and minor league football isn’t an appealing product. No one can go head to head with the NFL and, as the AAF found out, no one particularly cares about the NFL’s castoffs.

The marketing genius of the WWE isn’t enough to overcome that. Neither is sports betting, which AAF had counted on to ensure the league’s survival.

The AAF was supposed to be different, but it really wasn’t. Take away celebrity coaches Steve Spurrier and Mike Singletary and there wasn’t a recognizable face in the league for fans.

The game plan wasn’t to take on the NFL, but rather to become a development league for it. But the NFL wasn’t terribly interested, and its players’ union didn’t embrace the idea of players taking a beating over two seasons instead of one.

The AAF got a temporary lifeline with a cash infusion from Tom Dundon, who also owns the NHL’s Carolina Hurricanes. But in the end, Dundon’s deep pockets weren’t enough as it became apparent that the league model simply wasn’t going to work.

And the dream of Ebersol and co-founder Bill Polian, the former NFL executive who built a Super Bowl winner with Indianapolis, was over barely two months after it began.

“I’m extremely disappointed,” Polian told The Associated Press. “On one hand it was kind of our wildest fantasies come true. It all came true and now it’s all come crashing down.”

MORE: Stellino: Why did The Alliance crumble?

In the end, the collapse of the AAF was as inevitable as it was predictable. The appetite for football is not insatiable, it seems, when the football is not at the highest level.

The AAF is gone, and those betting it wouldn’t last a season might be the only winners. Those funding the league certainly weren’t, and the players themselves never got to cash in on their three-year contract or the promise of one year of tuition that the league said it would pay for those who didn’t finish school.

In the end it was just another bad bet for everyone involved.