Stellino: Why did The Alliance crumble? 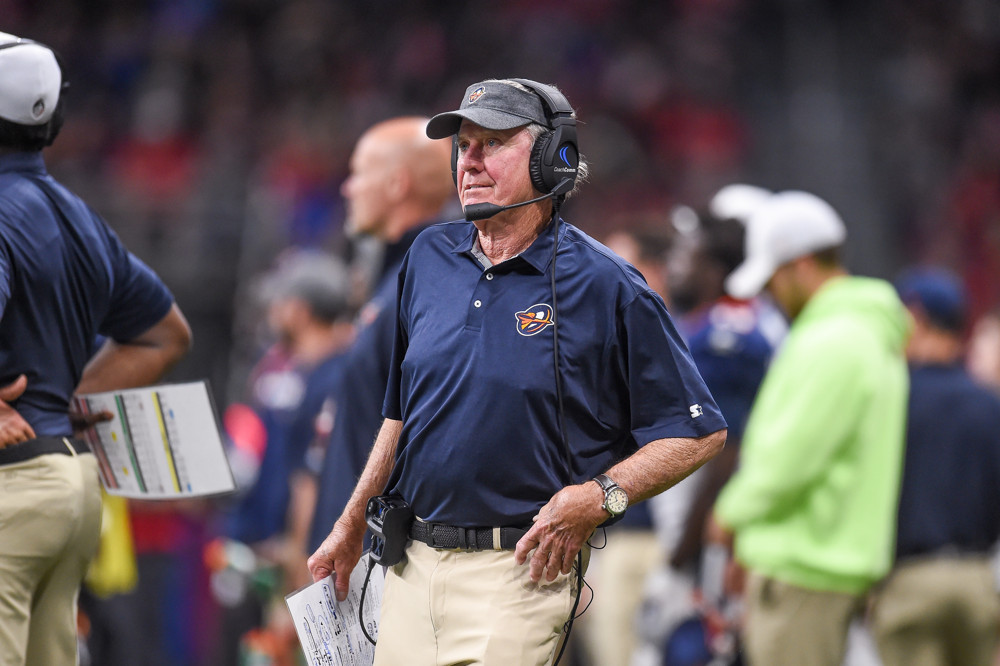 SAN ANTONIO, TX - FEBRUARY 17: Orlando Apollos head coach Steve Spurrier looks on during the AAF game between the Orlando Apollos and the San Antonio Commanders on February 17, 2019 at the Alamodome in San Antonio, Texas. (Photo by Daniel Dunn/Icon Sportswire)

The old ball coach was one of the few winners in the untimely end of the Alliance of American Football.

“If I never coach again, I went out a winner,” Steve Spurrier said after league owner Tom Dundon decided to pull his funding, dooming the AAF on Tuesday.

“But for players and assistant coaches, it was a bummer,” Spurrier added.

Spurrier didn’t need the job or the money, but it was a bummer for the players, assistant coaches and front employees who did. And they are now unemployed.

And if Spurrier is right, they were sold a false premise.

“Everyone was led to believe that the Alliance was well funded, and we could play three years without making any money and his and that and the other,” Spurrier told the Orlando Sentinel. “Obviously, everything that was said was not truthful.”

So, what happened to the funding?

Did co-founders Charlie Ebersol and Bill Polian believe their own hype and think the money was going to materialize or did they have funding set up that fell through?

There were reports that businessman Reggie Fowler was committed to contribute $70 million, but bailed out after putting in $28 million.

Still, $70 million wasn’t nearly enough money to get the league through the first year. Where did Ebersol think the rest of the cash was coming from?

We don’t know. What we do know is that by the second week of the season, the league was in financial trouble. Although Ebersol claimed the problem was a computer payroll glitch.

Anyway, Dundon, the Carolina Hurricanes owner, stepped in to make a $250 million commitment that would supposedly save the season.

It turns out that with two weeks left, Dundon lost his patience and willingness to lose more money and pulled out.

He wanted the NFLPA to loan him bottom of the roster players but that was a non-starter and probably would have violated the CBA.

Did they rush the launch?

In a radio interview, Polian said they had to go first, meaning get a leg up on Vince McMahon’s revival of the XFL, which is supposed to start play next year.

Polan also didn’t criticize Dundon, saying he was “like a breath of fresh air,” and that it was “not Tom’s fault,” and he “pointed out things that we needed to do.”

Polian added that they “didn’t have enough infrastructure to support the business side well enough to make it more sustainable” and “allowed costs to get out of control.”

When Ebersol got Polian to come on board, naming him a co-founder, that gave the league credibility.

But even if Polian was dealing more with the football side, shouldn’t he have been aware of what was happening on the business side?

Questions abound. Shouldn’t Polian have been able to provide that breath of fresh air himself? Didn’t he know any investors who could have helped save the league?

We also don’t know if it’s possible for a spring league to succeed because investors may not be patient enough to take big losses in the hopes of eventually making a profit.

The Orlando Sentinel’s Mike Bianchi asked Spurrier in a radio interview if the AAF problem was spring football or mismanagement.

“Probably a little bit of both,” he answered.

The Alliance’s plan was to have the league own all the teams and to pay the same salaries to the players, so one owner couldn’t go on a spending spree to the detriment of the rest of the teams.

That only works if the league has adequate funding to begin with. For reasons we don’t fully understand, the AAF went ahead without that the funding in place.

It was a fatal mistake for the league. And a costly one for the players and employees who put their trust in AAF.