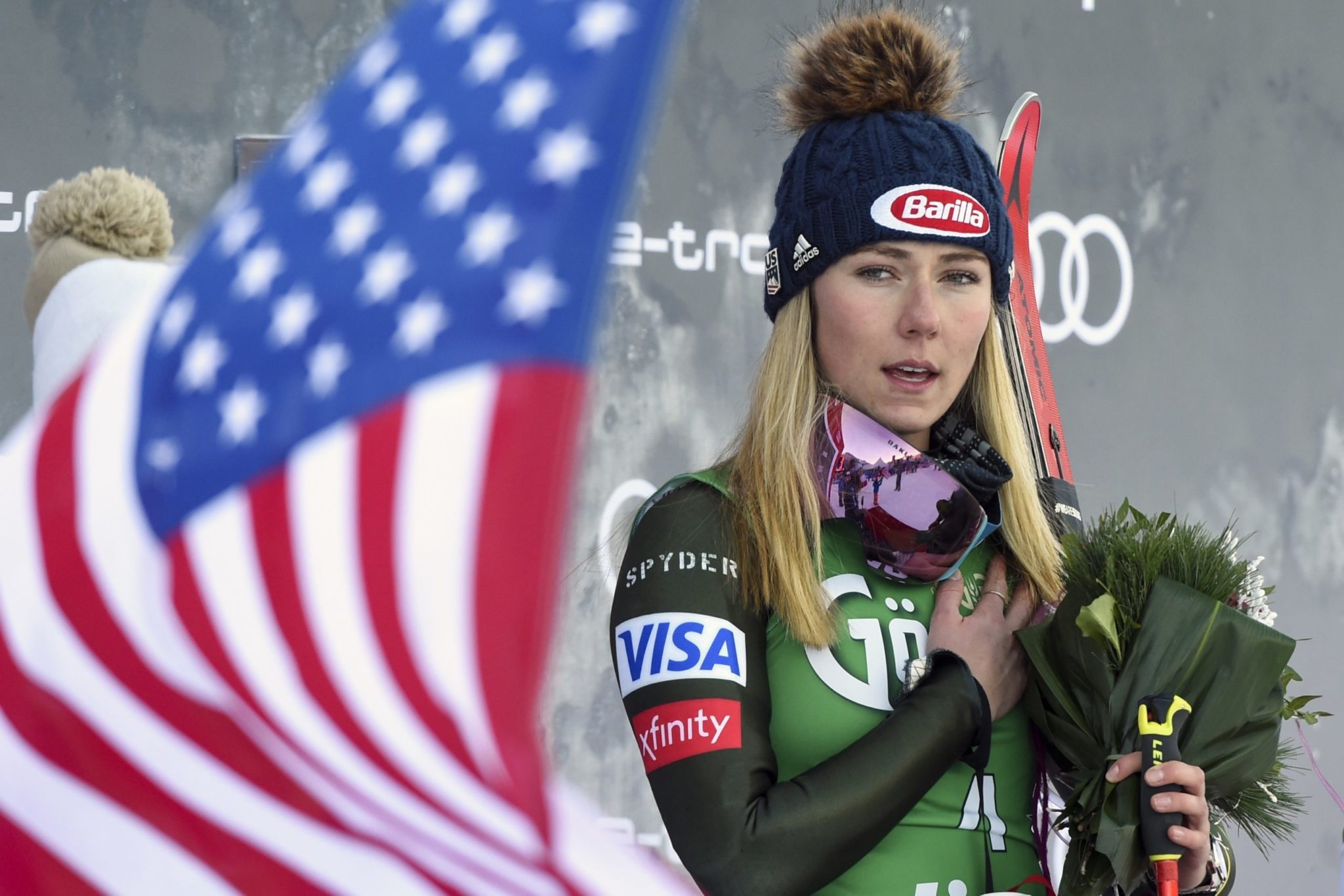 Even when she has just nailed a first run, Mikaela Shiffrin is not only thinking about getting the victory.

Helping a teammate was on the American three-time overall champion’s mind after taking the lead in the first part of a women’s World Cup giant slalom on Saturday.

When she was done with TV interviews and posing for selfies with fans, Shiffrin took the gondola lift back up the hill to meet 22-year-old Nina O’Brien, the only other starter from the U.S. ski team.

“She gave me a pretty good course report,” said O’Brien, a late starter with bib 35. “She talked me through everything she was feeling. How she thought it was. So that was super helpful.”


A few minutes later, O’Brien, a San Francisco native chasing her first top-20 result on the World Cup, finished her run 3.52 seconds off Shiffrin’s time and failed to qualify for the final leg.

“I couldn’t totally execute it today, but I did really appreciate,” O’Brien said about the visit from Shiffrin, who also dominated the second run and ended up easily winning the race.

“She is definitely an inspiration,” O’Brien said. “She sets the bar pretty high but it’s really good to chase that, to see what she’s doing and try to emulate her.”

For Shiffrin, going up the hill again midway through a World Cup event to support her teammate was a natural thing to do.

“It’s something I want to do. I want to see my teammates have success as well,” she said. “I know how heartbreaking it is to do your very best and to be right on the edge of the top 30. It’s really difficult to get over that mental barrier in a race.”

The GS and slalom events in the Austrian Dolomites this weekend are special for Shiffrin, who earned her first career World Cup podium here in 2011 at age 16.

Entering the top-level of international ski racing was frightening for her.

“When I was coming in the World Cup, I didn’t feel a huge connection with my teammates because they were older than me by 10 years or so,” Shiffrin said.

“I didn’t feel like someone was really looking out for me. That was a huge reason why it was always so important for me to have my mom around because she was really the only one who was able to look out for me in any sense,” she added.


“When you’re 16 years old, it’s scary, it’s intimidating. So when I look at some of the younger girls now, I can see a lot of myself and the feelings that I had. I want to help because I know how it feels, I know how scary it is and how intimidating it can be,” the American said.

Shiffrin’s position in the U.S. ski team has evolved over the years. With the successes and the records piling up, she has naturally grown into a leading role. Even more so since the retirement of Lindsey Vonn, the long-term flag bearer of women’s ski racing who left the sport after the world championships in February.

Shiffrin’s head coach, Mike Day, said she has become “a great example” for her teammates.

“Now she is spending more time, trying to be a mentor, and trying to spend the time and help the other racers make the step and make the leap into World Cup,” Day said.

“This is another responsibility that’s adding on to what she’s already doing,” Day added. “I think it’s something that she is enjoying, and she is a leader in the team.”

Even if her help to O’Brien didn’t quite work out Saturday, Shiffrin will keep supporting her and other teammates.

“I have seen Nina skiing faster than I do in training. I have seen her skiing amazing, top-10, top-five skiing. To do that in the World Cup is really tough,” Shiffrin said. “So if I have anything that I can say that might help her, then I want to do that.”