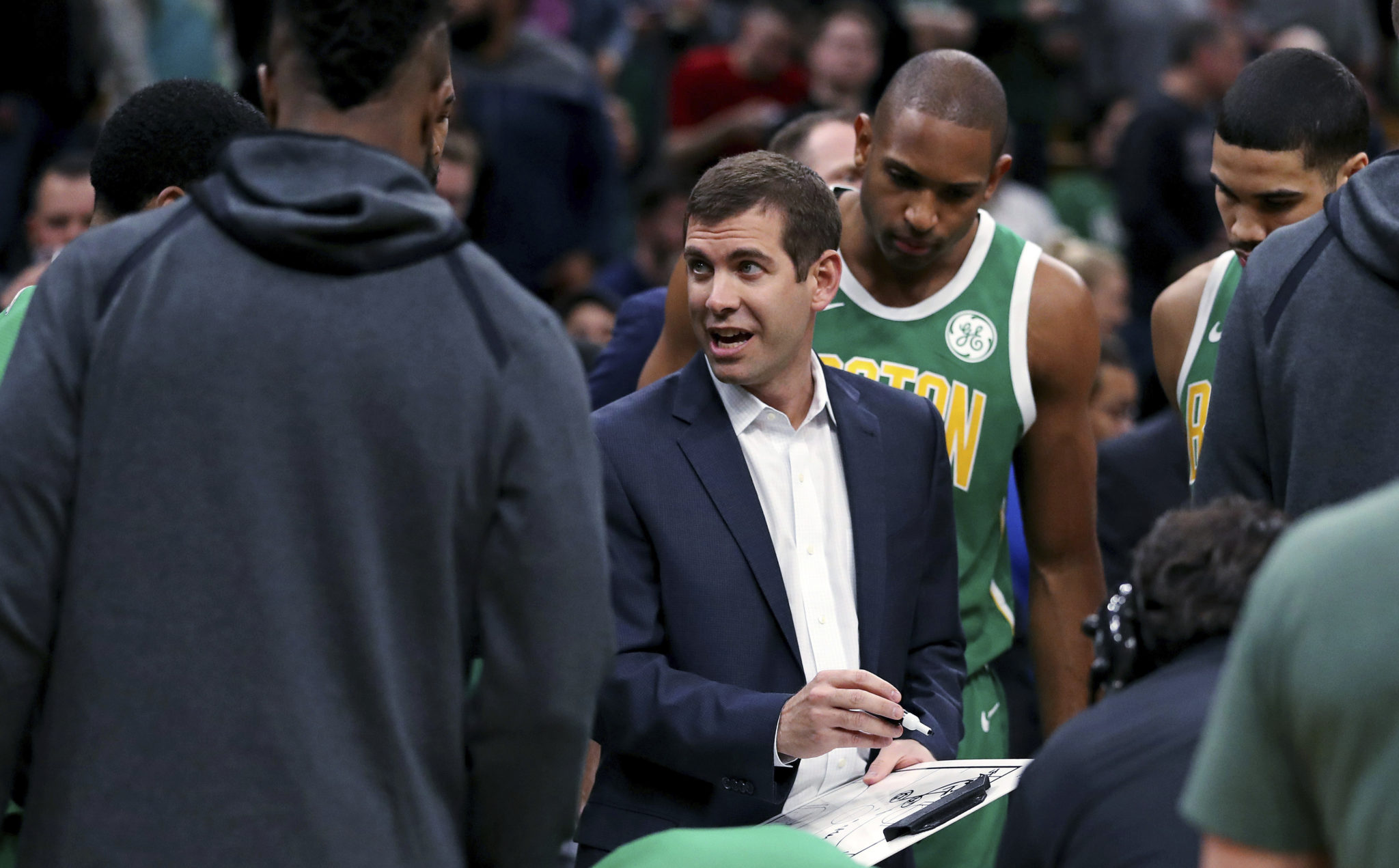 Boston Celtics head coach Brad Stevens, center, draws up a plan with his players before the first quarter of an NBA basketball game against the Denver Nuggets in Boston, Monday, March 18, 2019. (AP Photo/Charles Krupa)

BOSTON — Nikola Jokic had 21 points and 13 rebounds and the Denver Nuggets rallied in the fourth quarter to beat the Boston Celtics 114-105 on Monday night.

Will Barton added 20 points for the Nuggets, who clinched a playoff spot for the first time since 2012-13. They have won four straight.

Both teams came into the night trying to improve their playoff position.

The Nuggets tipped off their four-game road trip just a game behind Western Conference-leading Golden State in the standings. The Celtics came in fifth in the East, a game back of fourth-place Indiana and two behind Philadelphia, whom they visit on Wednesday.

The game felt like a matchup between two postseason-bound teams.

It stayed tight at the start of the second half, with neither team holding more than a two-possession lead in the third quarter.

But the Nuggets got some breathing room in the final period and took a 106-94 lead with 3:47 left in the game.

Boston scored seven straight to get it within five, but Barton stopped the run with a layup. Following a missed 3-pointer by Horford on the other end, Paul Millsap all but sealed it with a four-point play that made it 112-101 with 31.3 seconds remaining.

The pace was fast throughout.

The teams combined for 107 points in the first half. The Nuggets held the 55-52 halftime lead, with Jokic and Barton scoring 13 points apiece.

Irving started the game 1 for 9 from the field, but Horford picked up the scoring load for the Celtics, connecting on 5 of his 9 attempts from the field.

Nuggets: Jokic recorded his 39th double-double of the season.

Isaiah Thomas received lots of love from the Celtics during his latest return to the city he said still feels like home despite multiple stops the past two seasons.

A video highlighting Thomas’ time in Boston was shown during a timeout in the first quarter and ended with an extended standing ovation from fans and players and coaches from both teams.

Denver coach Michael Malone previously informed Thomas he was being dropped from the rotation in preparation for the playoffs. But he inserted the 5-foot-9 guard into the game with 2:42 left in the first quarter.

Thomas started slowly missing two shots, stepping out bounds and fouling Daniel Theis on his way in for a dunk. He started the second quarter and played a total of seven minutes for the game, finishing with no points and two assists.

A two-time All-Star in Boston, Thomas was blindsided by the trade that sent him to the Cleveland Cavaliers as part of the deal that brought Kyrie Irving to the Celtics in the summer of 2017. He was dealt to the Lakers at the trade deadline that next season, before landing in Denver this past summer.

He says the hip injury that slowed him during his final season in Boston is healed and that whatever happens he is going into free agency this summer with open eyes. That includes being open to a possible return to Boston.

“You never know what could happen,” Thomas said. “My options are always open no matter what it is. If I end up back here at some point. That would make the story that much better.”

Nuggets: At Washington on Thursday.

Kyle Hightower writes about sports for The Associated Press.