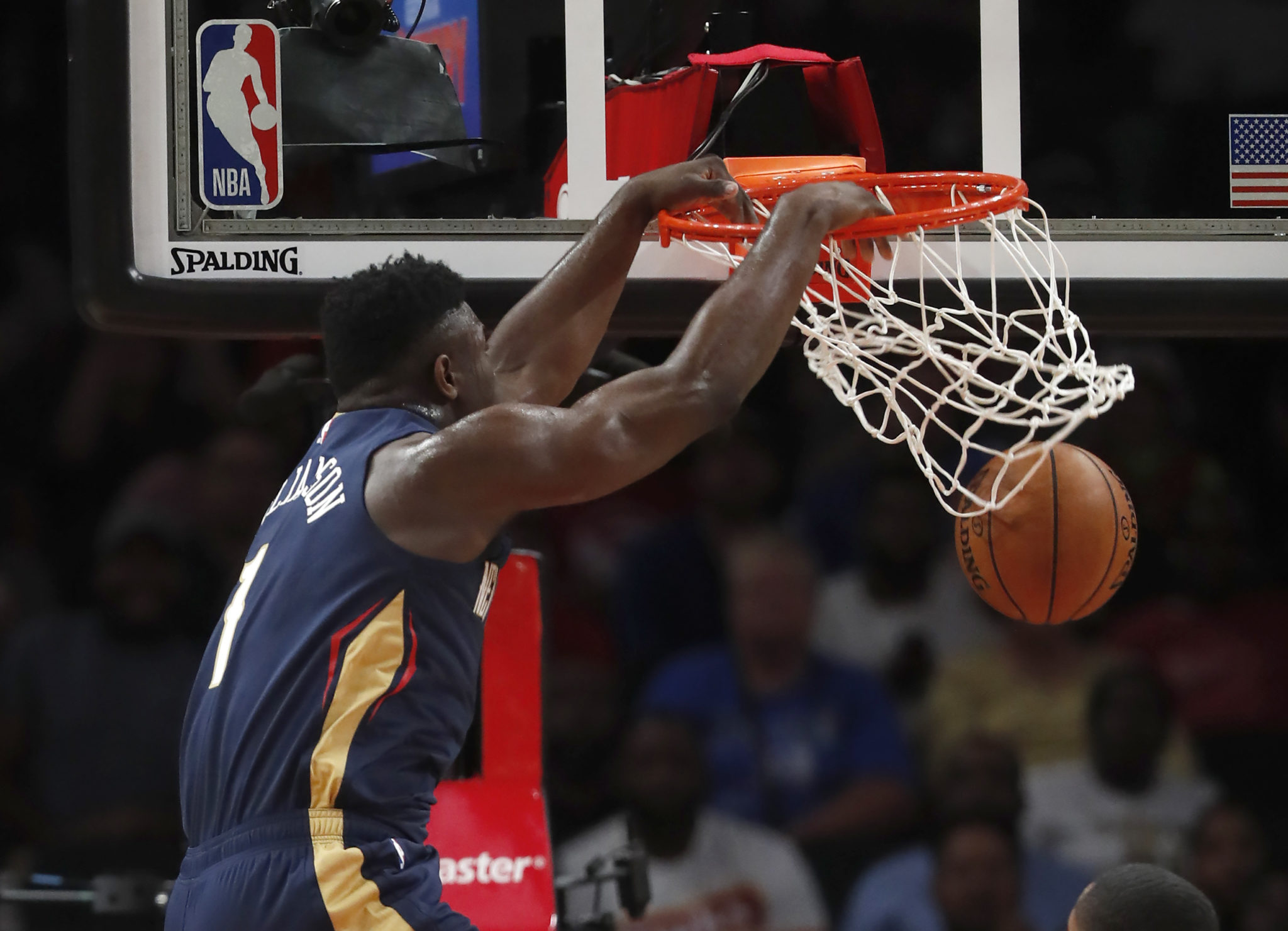 Zion Williamson may not be quite as tall as billed.

Showing off the high-flying talents that made him one of the most anticipated rookies in years, Williamson turned in a ferocious slam less than 2 minutes into his debut with the New Orleans Pelicans and dunked it two more times before the first half was done against the Atlanta Hawks.

“This isn’t high school or college anymore,” Williamson said. “You’ve got to go up strong. So I went up strong and I was able to finish.”

It was quite the close-range repertoire.

One with the right hand.

One with the left hand.

One with both hands.

Williamson finished with 16 points, seven rebounds, three assists and three steals, helping the Pelicans to a 133-109 victory over the Hawks before a much larger crowd — announced at 15,441 — than what normally be expected in Atlanta for a weeknight exhibition between two teams that failed to make the playoffs last season.

“I didn’t expect that many people to come,” Williamson said.


Of course, the score was irrelevant. This was chance to see the future of the NBA for the first time — not counting his brief stint in the Las Vegas Summer League — and Williamson did not disappoint, though he’s not close to being a finished product after just one college season at Duke. He missed a pair of 3-point attempts, turned it over four times and looked a bit lost defensively.

At one point, teammate Jrue Holiday, who has been in the league a decade, gently nudged him into the proper position.

Still, it was a tantalizing glimpse of Williamson’s skills.

“You know me,” he said, breaking into a big smile. “It was a lot of fun. The first NBA game. It’s not going to count against the record. But the first one of hopefully many. I’m glad I could get that one under my belt.”

Just 62 seconds into the game, he took a pass from Lonzo Ball on the pick-and-roll and banked one in while drawing the foul from John Collins. Williamson knocked down the free throw and — voila — he had his first three-point play. A small section of the Atlanta crowd chanted “Overrated!” but their hearts weren’t really in it.

Williamson was still listed at 6-foot-7 on the Pelicans roster, though he reportedly measured an inch shorter without shoes as part of the league’s push to accurately measure everyone in the league this season.

Whatever the case, he turned Hawks 7-footer Damian Jones into the first of what will likely be an abundance of poster victims with his next basket.

Sizing up the Hawks from beyond the 3-point arc, Williamson suddenly burst toward the hoop, split a pair of defenders and dunked over the taller Jones with a fearsome right hand that left the fans gasping.

“I just saw the lane open up,” Williamson said.

A couple of minutes later, Williamson delivered a two-handed slam off another pass from Ball, an enticing display from a young duo that has come together in the Big Easy. In the second quarter, it was a left-handed dunk set up by a dish from Kenrich Williams as the Hawks defense wisely scrambled out of the way.

Before the game, the past and future came together.

Williamson lingered at midcourt during warmups, clearly eager for a chance to pay his respects to the NBA’s senior citizen. Atlanta’s 42-year-old Vince Carter, preparing for his record 22nd — and final — season, came over to say a few words to the 19-year-old phenom, pulling him in close to make sure he could hear it all.

“I told to enjoy the moment, have fun and be himself,” Carter said.

After the introductions and the national anthem, Williamson took the court with his new team, a franchise that was rocked by Anthony Davis’ trade demand but quickly recovered by landing the first overall pick in the draft lottery.

Davis was dealt to the Los Angeles Lakers for a haul that included Ball and Brandon Ingram — both of whom joined the teenager in a Pelicans starting lineup that also included Holiday and Derrick Favors.


The rebuilding teams featured four of the top 10 picks in this year’s draft.

The Hawks sent out No. 5 pick De’Andre Hunter as part of their starting lineup, and brought 10th selection Cam Reddish — Williamson’s Duke teammate — off the bench. The Pelicans also have No. 8 choice Jaxson Hayes.

Williamson was thrilled to get a chance to take the court with Reddish again, even though they are now on opposite teams.

“It’s crazy,” Williamson said. “Just a few months ago, we were in college together, just chillin’ and having fun with each other, playing in games, and now we’re pros. It was a different feel for sure. But it was great seeing him.”