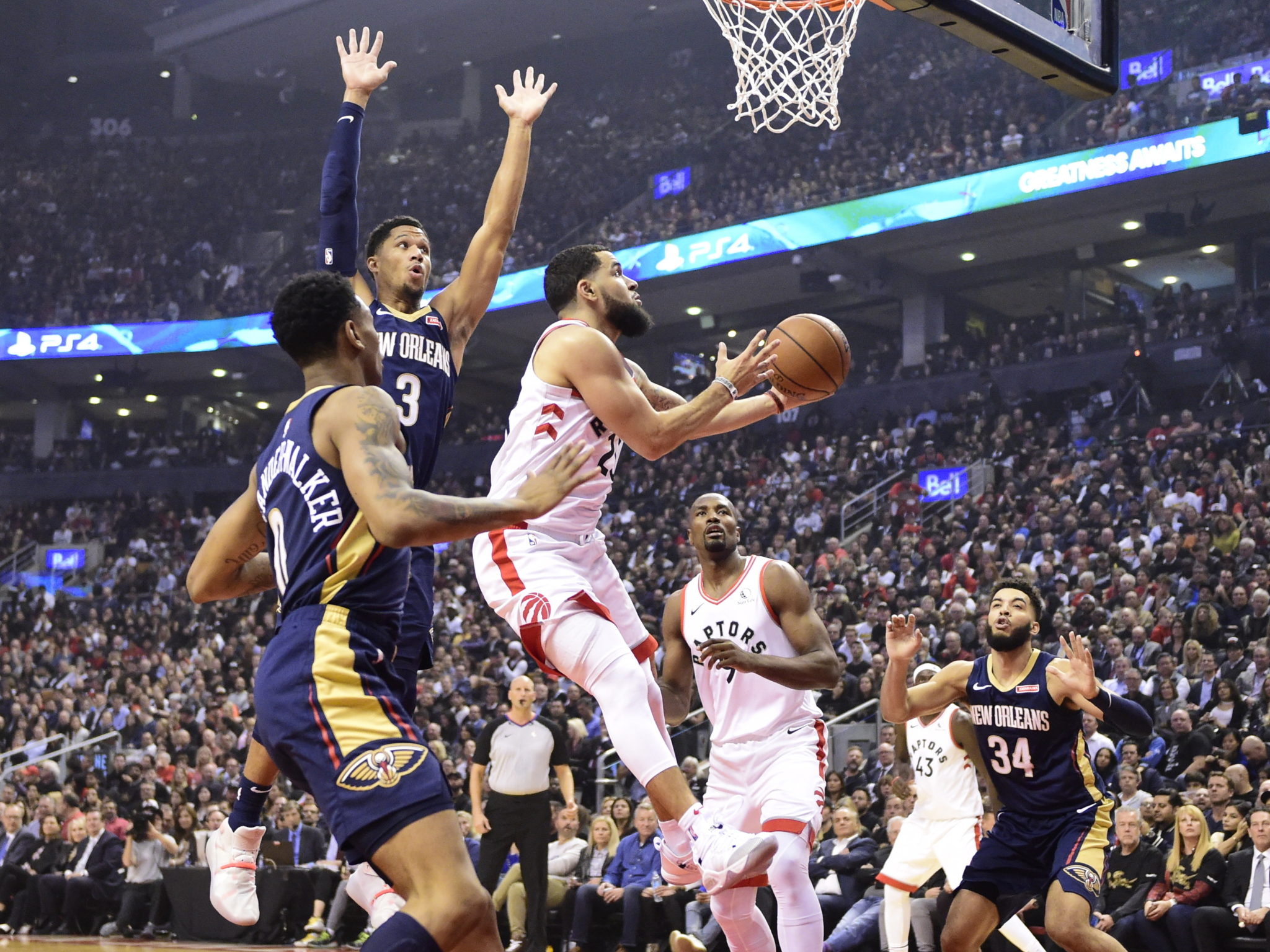 The Toronto Raptors slipped on shiny new rings, unfurled a championship banner, then got their title defense started with a hard-fought victory.

Fred VanVleet scored a career-high 34 points, Pascal Siakam fouled out with 34 points and 18 rebounds, and the defending champion Raptors beat the New Orleans Pelicans 130-122 in overtime on Tuesday night in the NBA’s season-opening game.

“Pascal and Freddy, they are the young core, they are the guys who will carry this thing on,” Raptors guard Kyle Lowry said. “I’m so happy for those guys to go out and perform like tonight. We’ll see them grow all year.”

Lowry scored 22 points, including a pair of free throws that put Toronto in the lead for good, and Serge Ibaka had 13 as the Raptors won their seventh straight season opener and posted their eighth win in nine meetings with the Pelicans.

“It’s very fun to be in the position that we’re in where we just won it but we’re kind of on the climb again,” VanVleet said.

Pelicans guard Jrue Holiday tied it at 122 by making a pair of free throws with 2:23 left in overtime. Lowry answered with his foul shots, VanVleet hit a corner 3, and Lowry also connected from long range to cap a decisive 8-0 run.

“They made a couple of big plays at the end that gave them separation,” Pelicans coach Alvin Gentry said. “That was the difference in the game.”


Brandon Ingram scored 22 points and Josh Hart had 15 points and 10 rebounds for New Orleans, which began the season without No. 1 pick Zion Williamson. JJ Redick scored 16 points, Nicolò Melli had 14 and Holiday added 13.

The Pelicans made 19 turnovers, leading to 22 Toronto points. Twelve of New Orleans’ turnovers came in the second half and overtime.

“We played hard, but we’ve also got to play smart,” Gentry said. “We didn’t play smart down the stretch there.”

Lowry made a pair of free throws to tie it 117-all with 29 seconds left in regulation, and Toronto’s Norman Powell grabbed the rebound on a missed shot by Holiday, giving the Raptors one last shot with 8.9 seconds to go.

Powell got the ball, but his long 3-pointer hit the back of the rim and bounced out, sending it to overtime.

Before the game, the Raptors received the biggest championship rings in NBA history and unfurled a banner celebrating their six-game triumph over Golden State last June.

“I have to start lifting more weights so I can carry it around,” VanVleet joked.

“Bryce Harper is gone, too, but where are the Nationals?” Gentry asked rhetorically about Washington’s World Series baseball team. “I wouldn’t count these guys out just yet.”