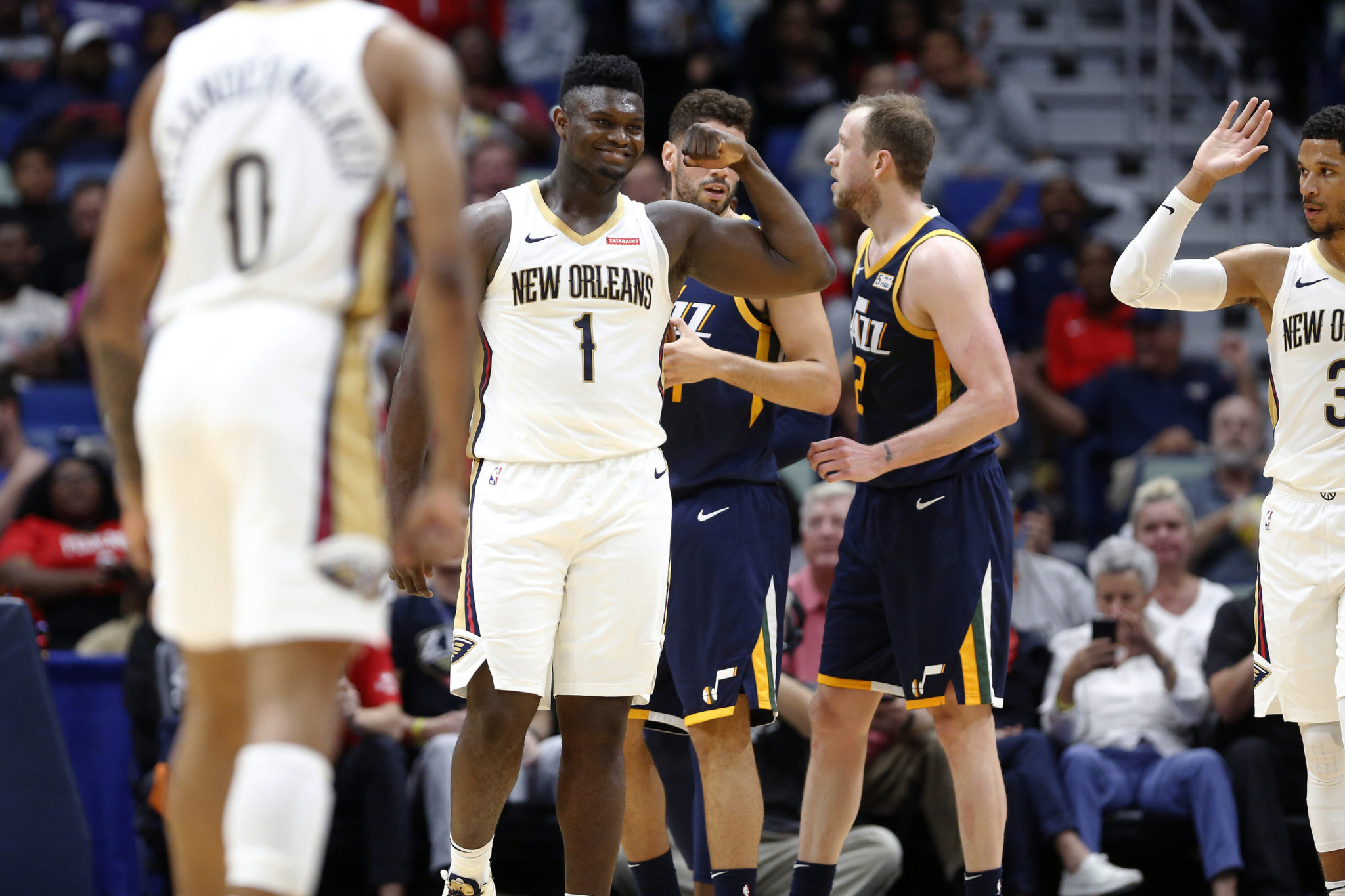 Zion Williamson celebrated a recent alley-oop dunk with an ebullient smile and a flexed left bicep as an energized crowd roared approvingly.

The NBA preseason has provided a tantalizing taste of the excitement the league’s top overall draft choice — a charismatic, 6-foot-6, 285-pound force of nature — could bring to New Orleans’ long moribund small-market franchise.

Energetic crowds well in excess of 10,000 showed up for the Pelicans’ first few exhibition contests, whether at home or on the road, rumbling with anticipation when Williamson had the ball and erupting when he launched his massive frame skyward to throw down rim-rattling dunks.

“We would have loved to have crowds like this for any game last year,” Pelicans fifth-year coach Alvin Gentry said following his club’s lone home exhibition game. “In the years I’ve been here, I’ve never seen this much interest in the start of a basketball season.”

The Pelicans look primed to play entertaining and compelling basketball, whether or not they emerge as playoff contenders this season.


The former Duke star also doesn’t seem fazed by the enormous expectations or hype surrounding his highly anticipated first pro season. He’s familiar with fame, having been an internet sensation since high school.

“I feel like when he dunks and does all that, you’ve seen that since he was like 16 years old,” Pelicans guard Jrue Holiday said. “One thing that surprised me was his maturity — his maturity level off the court, being able to handle these types of situations and come in with so much hype and still be able to go out there and perform.”

Or as Williamson puts it: “I’m just playing a game I love.”

Here are some other things to know about the New Orleans’ 2019-20 campaign:

The Pelicans, who’ve missed the playoffs three off the past four seasons, have been looking forward to a fresh start since six-time All-Star and 2012 No.1 overall draft choice Anthony Davis requested a trade in late January.

Griffin arrived looking to bring in a bounty of promising young players in exchange for Davis. He gained more leverage than expected when the Pelicans won the NBA’s draft lottery — and the right to select Williamson.

Having accumulated all that youth, Griffin made a trade with Utah for veteran center Derrick Favors and signed free-agent guard J.J. Redick.

Holiday, whom Griffin calls the Pelicans’ “best player,” is expected to be the only returning player in the starting lineup.

“Jrue is a perfect conduit for us between the young guys and some of our veteran leaders,” Griffin said.

The 29-year old guard, who has been among the club’s top scorers and defenders in recent seasons, is expected to be joined by Ball at point guard, along with Ingram, Williamson and Favors in the front court.

How that lineup stacks up in the Western Conference remains to be seen. In the meantime, Griffin is preaching patience.

“We’re in an unbelievably difficult conference. We’re going to take some lumps,” Griffin said. “What we do after that is all that really matters.”

Redick looks likely to be a top reserve in his 14th season. A 41 percent career 3-point shooter, he should draw defenders to the perimeter and give players like Williamson more space to operate inside.

“Our style of play lends itself very well to the way he plays the game, but our roster lends itself to the leadership component he brings,” Griffin said.

While Williamson is bound to find NBA defenses more nuanced and challenging during the regular season, he doesn’t downplay his ability to contribute.

“I can see myself being a big play-maker for this team, like attacking the basket, making open passes and just improving on my jumper,” Williamson said, adding that he believes his perimeter shooting is underestimated.

“People kind of over exaggerate the whole ‘can’t shoot’ thing,” Williamson said after hitting a 3-pointer in his third preseason game. “If they want to leave me open, I’m going to shoot every time.”

Pelicans executives, coaches and players have effusively praised Williamson for an unselfish, team-first approach that they find refreshing for a player who has been such a magnet for attention.

“He wants to win,” Holiday said. “I feel like that’s the main thing for him. He doesn’t care about exposure.”

Brett Martel is a reporter for The Associated Press.