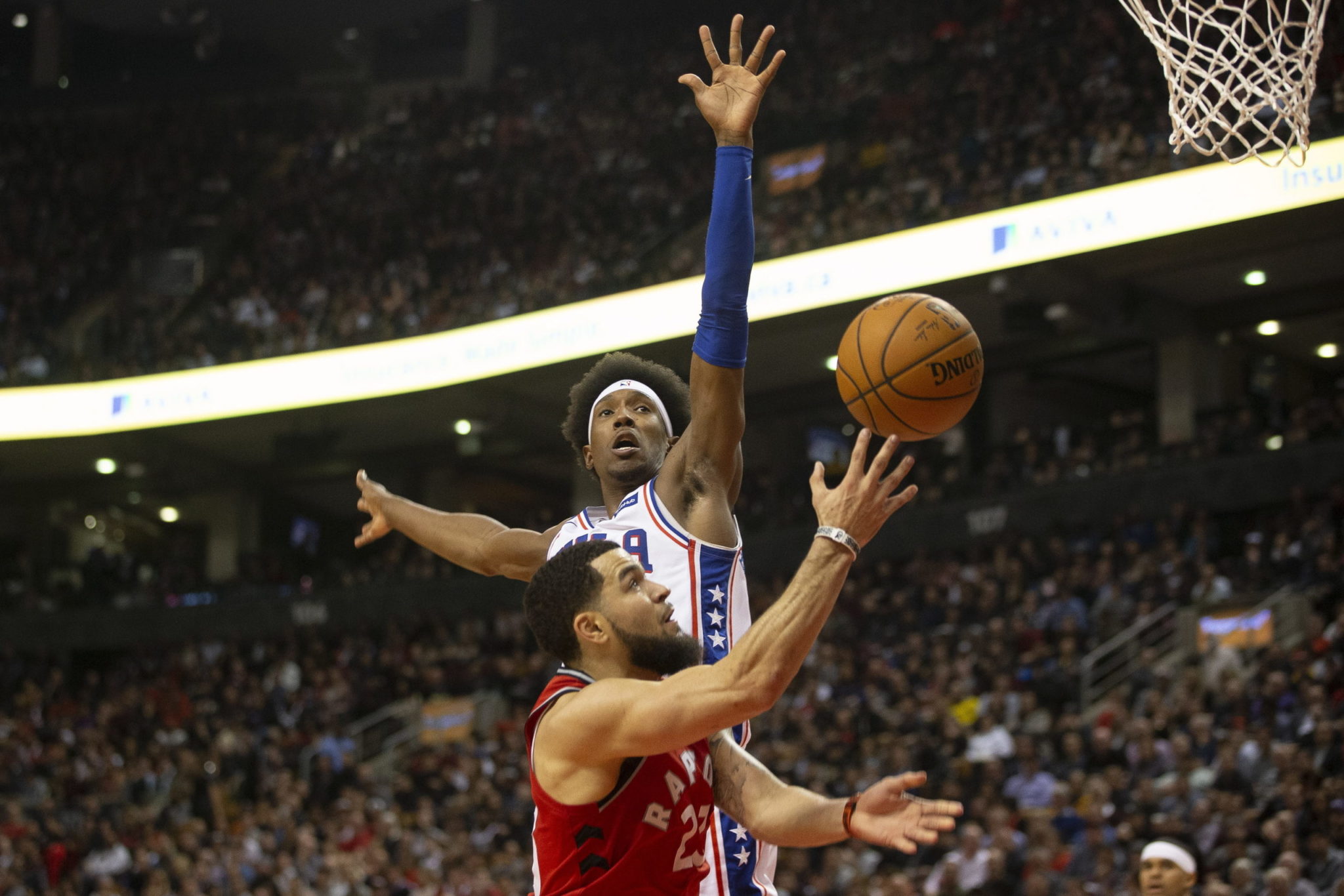 Joel Embiid returned to Toronto and had another night he’d rather forget.

Pascal Siakam scored 25 points, Fred VanVleet added 24 and the Raptors held Embiid scoreless for the first time in his career in a 101-96 victory over the Philadelphia 76ers on Monday night.

It was the first meeting between the teams since Kawhi Leonard’s dramatic buzzer beater that bounced off the rim four times before dropping, the winning basket in Game 7 of the second round of the playoffs in May. Toronto went on to win its first NBA title, before Leonard left for the Los Angeles Clippers.


Embiid, who was left tearful after that postseason defeat, didn’t do much Monday to erase those bad memories. Still, his teammates didn’t seem worried about their star center’s scoreless outing.

“Everyone has down games,” Sixers guard Ben Simmons said.” No one is Superman. It happened tonight to Jo, but he’s going to be good.”

Embiid shot 0 for 11, missing all four of his shots from 3-point range and going 0 for 3 at the free throw line. He finished with a game-high 13 rebounds.

“Defensively, they’re everywhere,” Embiid said of the Raptors. “They’re so long and they make sure they pack the paint.”

“I think you give Marc Gasol, a former Defensive Player of the Year, credit,” Sixers coach Brett Brown said. “It was a long night for Jo.”

Embiid was playing for the fourth time in six days, but denied feeling worn down by Philly’s schedule.

“I didn’t look fatigued and I was definitely not fatigued,” he said.

Rondae Hollis-Jefferson had 16 points and 10 rebounds for the Raptors, who posted their 14th consecutive home victory over the 76ers.

OG Anunoby scored 12 points, Terence Davis had 11 and Norman Powell 10 as Toronto improved to 7-0 at home.

Josh Richardson scored 25 points, Tobias Harris had 18 and Mike Scott 12 for the 76ers, who have not won a regular-season game in Toronto in more than seven years.

“We look back at this game, we know we should have won this one, but Toronto made plays,” Simmons said.

Simmons had 10 points, 14 assists, and nine rebounds. Al Horford scored 11 points and added 10 rebounds for the 76ers, who had their four-game winning streak snapped.


The Raptors led 88-87 on a driving layup by rookie Terence Davis with 7:31 remaining in the fourth. Philadelphia’s Furkan Korkmaz hit a 3, Horford made a baseline jumper and Harris added a hook shot as the 76ers used a 7-0 run to build a 94-88 lead with 5:16 left to play.

Powell and VanVleet hit 3-pointers that cut the gap to two, 96-94, but Toronto missed three straight chances to tie it. Gasol missed a pair from the line, a jump shot by Siakam missed the mark, and Harris blocked Anunoby’s fast-break drive after an Embiid turnover.

Siakam ended Toronto’s drought with a three-point play, giving the Raptors a one-point edge, 97-96, with 1:01 left.

Siakam forced a turnover on an entry pass from Simmons with 12 seconds remaining to preserve Toronto’s lead. VanVleet was fouled and made two shots, giving the Raptors a three-point cushion.

Harris and Simmons missed 3-pointers before Siakam finished it with a thunderous dunk.

“We ended it with eight consecutive stops to end the game,” Raptors coach Nick Nurse said. “That’s pretty good, especially in a close game like that.”