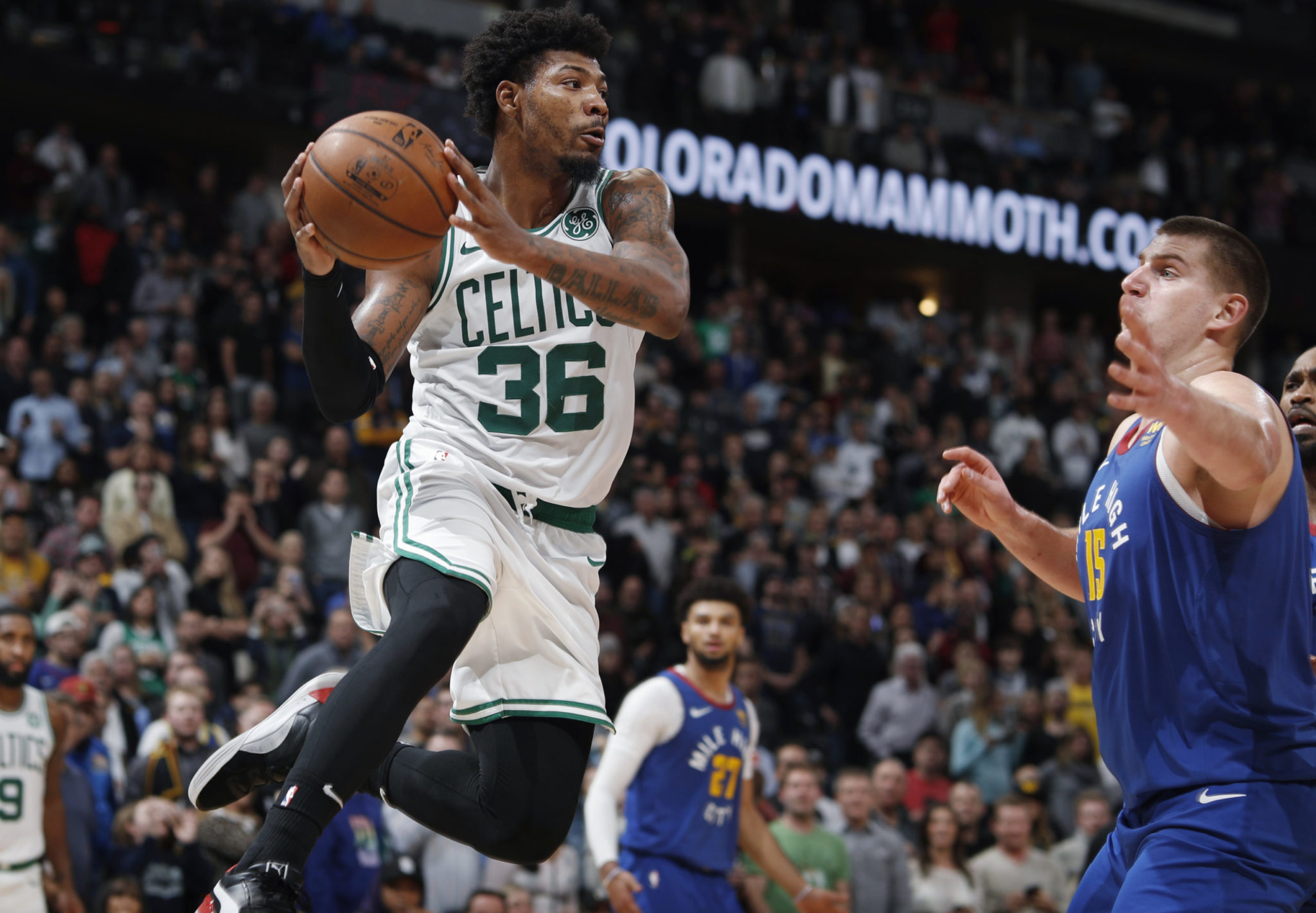 The NBA is investigating an incident between Boston guard Marcus Smart and a fan in Denver, after the Celtics guard said he heard a derogatory comment and was unhappy with the way that he believed security in the arena responded to the matter.

Smart said a fan told him to “get on your knees” after he pursued a loose ball along the sideline during Friday’s game in Denver. Smart said one of his feet got tangled in frame of a courtside chair, and while he was trying to free himself he heard the comment.

“The fan told me, ‘That’s right, stay on the ground, get on your knees,’” Smart told reporters postgame Friday night. “Excuse me? I just told him, ‘Listen, just watch the game because if we retaliate to you guys and if we were on the street, I guarantee you wouldn’t say that.”


Smart said security at Denver’s Pepsi Center essentially ignored him. At least one security guard was seen speaking to fans in that section moments after the fourth-quarter incident, but it was unclear if any further action was taken.

“I told them who it was,” Smart said. “They just looked at him and didn’t even say anything to him, didn’t even get him out of the game. Probably if I was a superstar, they probably would have did something but it is what it is. We’re going to end up protecting ourselves eventually and it’s not going to be pretty for those fans and we don’t want that. The league doesn’t want that.”

The incident is just the latest in several derogatory exchanges that have caught the NBA’s attention in recent months. Russell Westbrook, DeMarcus Cousins, Kyle Lowry and others were involved in such incidents last seasons, prompting the NBA to say that it wants arena security personnel to have zero tolerance for abusive or hateful behavior.

Last season, Westbrook and Cousins were subjected to racist taunts in Salt Lake City and Boston and the fans involved in those incidents were banned by the Jazz and Celtics. Lowry was shoved by a minority partner of the Golden State Warriors’ ownership group, seated courtside during the NBA Finals, and that person was banned from team business for a year by the league.

The league has not released exact numbers of how many fans have been ejected for such incidents. But after a number of players met with the NBA this past offseason to air their concerns about safety and fan behavior, the league expanded the area in arenas most closely monitored when it comes to player-fan interaction.


The top-priority area used to be just those seated with feet on the court itself or maybe the first couple rows of courtside seats; now, that area goes several rows deep in every building, plus the areas where teams and referees enter and exit the court.

“That’s a problem in the league that we’ve got to fix,” Smart said. “If we retaliate to protect ourselves, we’re the ones getting in trouble. They’re not. And that’s not right. … There’s nowhere in this league for it.”

This is not the first incident between Smart and a fan.

In 2014, when he was playing for Oklahoma State, Smart was suspended three games for shoving a Texas Tech fan after a play where he crashed into some baseline seats following a blocked shot. Smart got up, then turned around and exchanged words with the fan before giving him a two-handed shove. Smart later apologized, and said it was “a lesson I’ll have to learn from.”