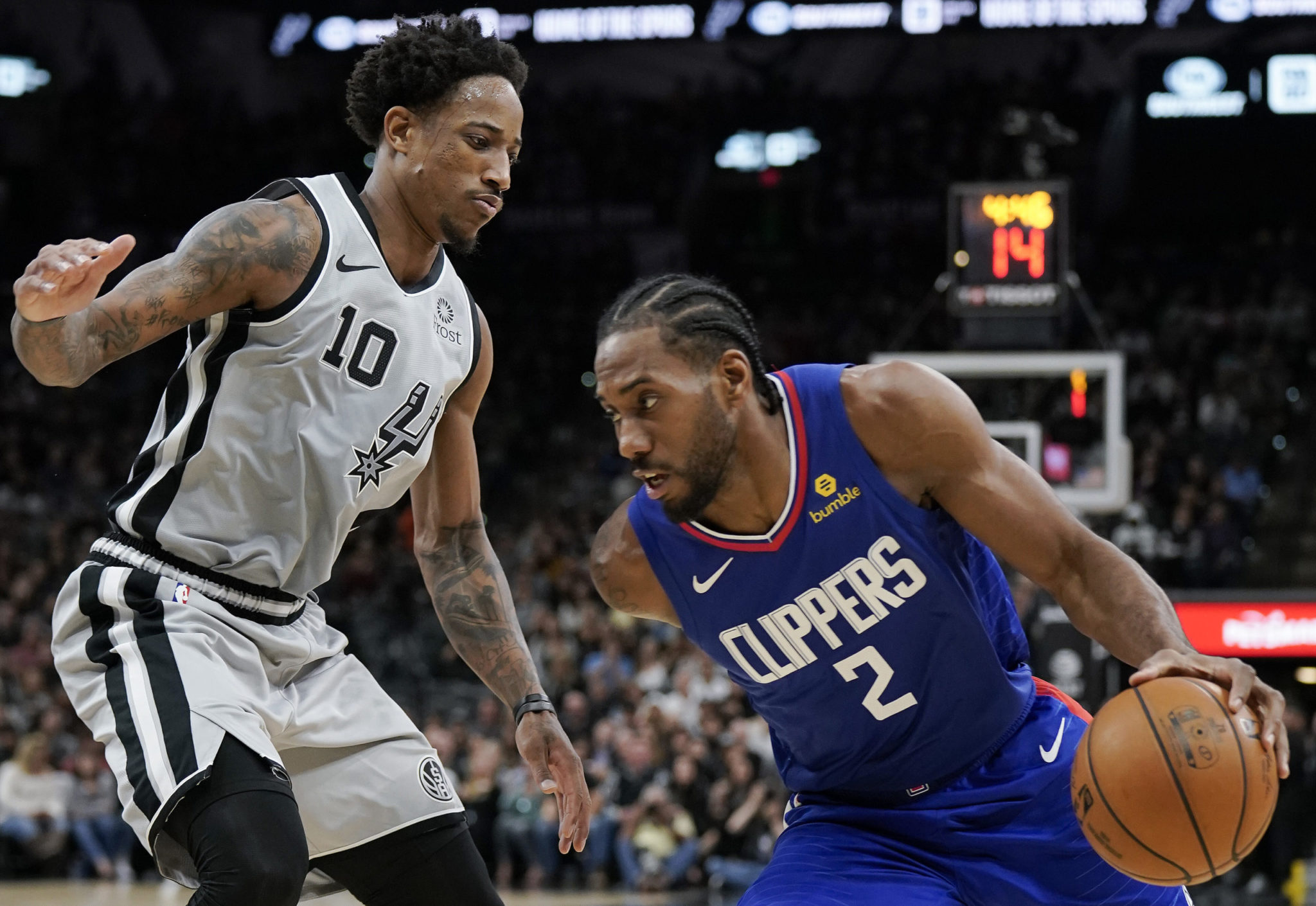 The crowd in San Antonio turned on Kawhi Leonard again, showering the Clippers forward with deafening boos and angry shouts.

Leonard earned his first victory in San Antonio since his exodus from the franchise, getting 26 points, nine assists and seven rebounds in three quarters as Los Angeles beat the Spurs 134-109 Saturday night.

“He was as sharp as I’ve seen him,” Los Angeles coach Doc Rivers said. “Not only with his scoring, but with his defense and his passing.”


“It only can make me better and make our team better with the crown not being on our side,” Leonard said.

Leonard was roundly booed during pregame introductions and each time he touched the ball, just as he was in two previous visits to San Antonio. The reigning Finals MVP gave the sellout crowd plenty to jeer about during an active 27 minutes.

Leonard was 11 for 16 from the field with four steals and only two turnovers in setting a hurried pace the Spurs were unable to match.

The Clippers had 74 points in the paint, 26 fast-break points and 36 points off 18 turnovers.

Leonard benefited from the increased pace, slamming in a season-high four dunks.

“I was able to get out in transition, especially get down the paint and able to dunk the ball,” Leonard said.

Leonard demanded a trade after playing just nine games for the Spurs in 2018 due to a right thigh injury. San Antonio relented and traded him the next summer to Toronto, where he led the Raptors to their first NBA championship last season.

Spurs fans have remained bitter about his forced departure, making the team’s blowout victories over Leonard and the Raptors last season and the Clippers on Nov. 29 that much sweeter.


“Just the way I probably left and how it was portrayed, the narrative that was portrayed in the media,” Leonard said. “But, I don’t make no sense of it. I know it’s a game and it’s competitive. When we’re not playing or if I’m walking on the street or I see someone from San Antonio, they thank me for everything I did and they respect the way I played when I was here. It’s just a part of the game, I feel like.”

Leonard turned the tables in his fifth matchup with San Antonio, spending the entire fourth quarter on the bench as Los Angeles stretched its lead to 33.

The Clippers went on a 12-2 run for a 52-44 lead with 7 minutes left in the first half as Leonard and Paul George remained on the bench.

Leonard returned shortly thereafter, making all three of his attempts in the second quarter to push the Clippers to a 64-52 lead.

The Clippers outscored the Spurs 41-21 bridging the second and third quarters.

Los Angeles had six players in double figures, including 21 by Montrezl Harrell and 20 by Lou Williams. George finished with 11 points.

DeRozan, who had 13 points on 6-for-7 shooting in the first quarter, finished with 24 points to lead San Antonio. Marco Belinelli added 17 points.

Clippers: Former Spurs F JaMychal Green missed the game with a bruised tailbone. … Landry Shamat had three points in 14 minutes in his third game off the bench after 13 starts.

Spurs: F Rudy Gay had seven points in 20 minutes after being listed as questionable due to an undisclosed illness. … C Jakob Poeltl had four blocked shots, raising his season total to 41 in 28 games. … San Antonio is 73-15 against the Clippers at home.

Leonard has not played in back-to-back games this season and Rivers said that won’t change when the Clippers visit Oklahoma City on Sunday night despite his limited minutes against the Spurs.

“I haven’t even thought about it, but we’ll see. I doubt it,” Rivers said. “Just too early for me, to be honest. He may bring it up, but I still don’t think we’ll do it.”

Spurs: At Memphis on Monday night.

Raul Dominguez is a reporter for The Associated Press.