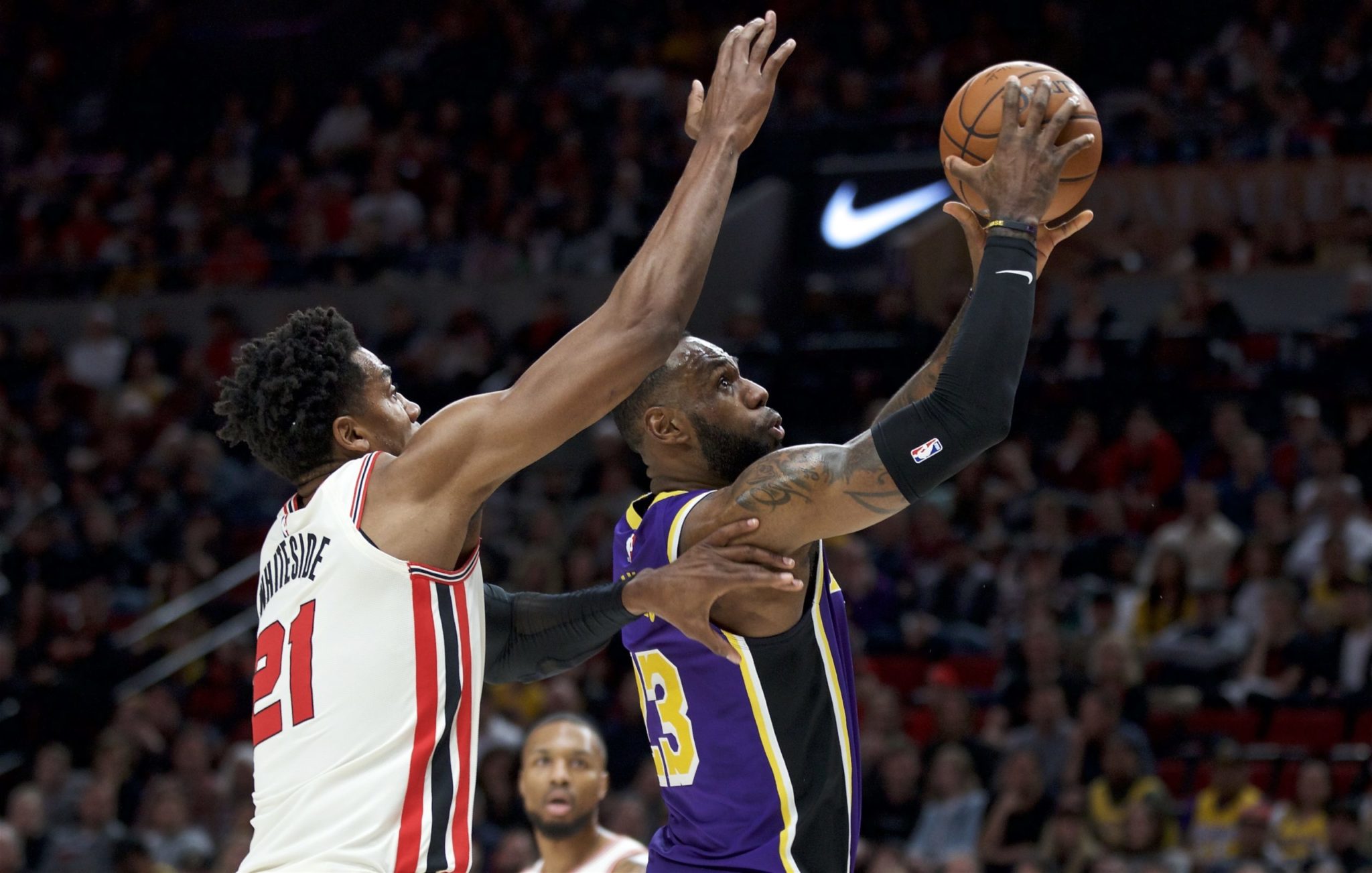 Kyle Kuzma scored 24 points, LeBron James had 21 points and 16 assists, and the Los Angeles Lakers snapped a season-long four-game losing streak with a 128-120 win over the Portland Trail Blazers on Saturday night.

Anthony Davis added 20 points and nine rebounds for the Lakers.

Damian Lillard had a game-high 31 points for Portland, which dropped its third straight. Hassan Whiteside had 19 points and 16 rebounds.


The game was a high-scoring affair. Both teams scored over 30 points and shot over 50% from the field in the first quarter as the Lakers built a two-point lead. In the fourth quarter, neither team cracked 30 points.

The Lakers continued to extended their lead in the first thanks in large part to the play of Kuzma. Kuzma had 20 points in the first half, a season-high for him in any half this season. He had 11 points in the second quarter as the Lakers carried a 71-64 lead into halftime.

Portland opened the second half on a 5-0 run before the Lakers seized control again. James connected with Davis twice on full-court passes that led to Lakers baskets.

Foul problems for the Lakers kept the Blazers in it. With seven minutes left in the third quarter, a foul by JaVale McGee put the Lakers in the penalty for the remainder of the period.

A 3-pointer by CJ McCollum gave Portland their first lead since the first quarter with 5:13 left in the third. Lillard scored 12 points in the quarter.

Davis had nine points in the third quarter and an assist to Kentavious Caldwell-Pope for a 3-pointer with 0.1 seconds left to give the Lakers a 103-95 lead after three.


Anthony Tolliver gave the Blazers a nice lift off the bench with a season-high 12 points, including four 3-pointers. Anfernee Simons also had a strong game off the Portland bench with 14 points and six rebounds.

Lakers: Despite coming into the game listed as questionable, the Los Angeles Lakers got LeBron James back on Saturday. That may help their self-described “angry and edgy” head coach Frank Vogel. After their Christmas day loss to the Clippers, the Lakers entered Saturday riding a season-worst four-game losing streak. “I started the film session telling them I’m angry and edgy,” Vogel said. “Forgive me, that’s just how I am. That’s how I was feeling yesterday, that’s how everyone was feeling. Following up with our guys that was just the pulse of the group. We’re not happy losing that Christmas day game and certainly we’re not happy losing four in a row. We have a lot of habits that we need to tighten the screws on.”

Trail Blazers: The Blazers still have one win against teams above .500 this season after losing a close game on Thursday to the Utah Jazz. They came back from 23 points down to get to within one point but were unable to close it out. They made the comeback attempt while Hassan Whiteside was on the bench, in part to the play of their back-up center. “I thought Skal (Labissiere) was part of the positive momentum of the quarter. (Carmelo Anthony) and CJ (McCollum) played the whole quarter, (Labissiere) played the whole quarter, I brought (Damian Lillard) in, I think Anfernee (Simons) played the whole quarter, so really it was more about keeping the positive momentum in there and I thought Skal played well.” Stotts gave Labissiere the start on Saturday in place of Kent Bazemore. It was the 13th different starting lineup Portland has tried this season. However, Labissiere’s night was cut short less than three minutes into the game as he left with an apparent bruised left knee. He did not return.