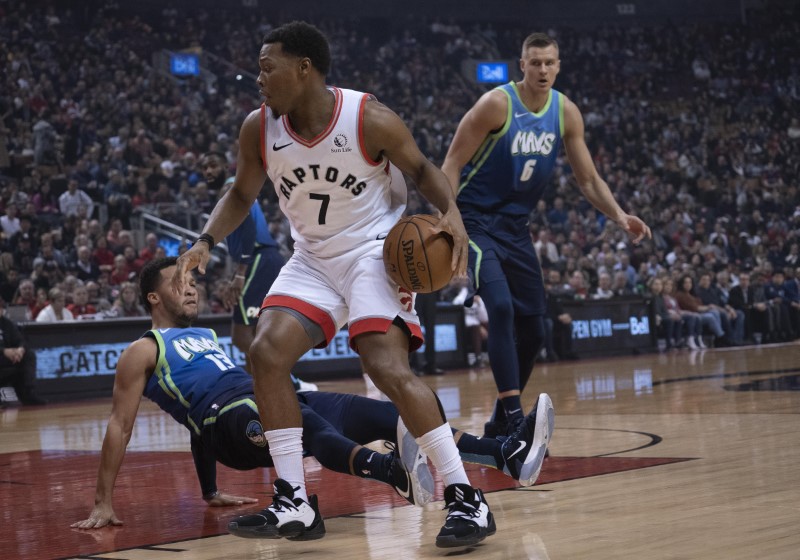 Kyle Lowry scored 20 of his 32 points in the fourth quarter and added 10 assists and eight rebounds as the Toronto Raptors overcame a 30-point third-quarter deficit to post a 110-107 victory over the visiting Dallas Mavericks on Sunday.

The 30-point deficit was the largest the Raptors have overcome to win a game in franchise history. The previous high was 27.

Toronto extended its winning streak to five games and handed Dallas its first road loss since a 106-103 setback to New York on Nov. 14.

Chris Boucher added a career-best 21 points for the injury-depleted Raptors, Rondae Hollis-Jefferson had 18 points and Fred VanVleet had 10.

Shai Gilgeous-Alexander matched his career high of 32 points set in his previous game to lift host Oklahoma City past Los Angeles, which played without Kawhi Leonard.

Gilgeous-Alexander was part of the trade that sent six-time NBA All-Star Paul George to the Clippers last July. George, who received a warm reception from the crowd in his first return to Oklahoma City, finished with 18 points.


Steven Adams had 20 points and a season-high 17 rebounds as the Thunder won a season-high fourth straight to move over .500 for the first time (15-14). The Clippers rested Leonard after he played 27 minutes on Saturday night in a 134-109 win at the San Antonio Spurs. Leonard has not played in back-to-back games this season because of lingering knee issues.

Nikola Jokic had 18 points and six rebounds, while Will Barton finished with 14 points and 13 rebounds for the Nuggets, who won their sixth straight. Malik Beasley chipped in 16 points off the bench.

Anthony Davis led the Lakers with 32 points, 11 rebounds and four blocks, but he sustained a knee injury. Kyle Kuzma, who returned after missing the previous five games with an ankle sprain, had 16 points off the bench for the Lakers, who dropped their third in a row. No other Laker scored in double figures.

Wesley Matthews scored 19 points in his return from a one-game absence due to a right thigh contusion as host Milwaukee recorded a victory over Indiana.

Giannis Antetokounmpo collected 18 points, 19 rebounds and nine assists for the Bucks, who outscored the Pacers 58-34 in the second half to improve to 21-1 in their last 22 games. George Hill and Brook Lopez each made three 3-pointers en route to 17-point performances as the Bucks improved to 9-0 against Central Division rivals.


Domantas Sabonis recorded 19 points and 18 rebounds, and Doug McDermott added 15 points for the Pacers, who saw their five-game winning streak come to a halt as they fell 6 1/2 games in back of first-place Milwaukee in the Central Division.

Jaylen Brown had 16 points, Grant Williams chipped in 12 and Enes Kanter contributed 13 rebounds as the Celtics won their third straight. Tatum, who also had 12 rebounds, scored 22 points in the fourth quarter alone to eclipse his previous career best of 34 set in January.

Devonte’ Graham scored 23 points and Bismack Biyombo had 18 for the Hornets, who have lost four of their last five. Charlotte was playing the second night of a back-to-back.