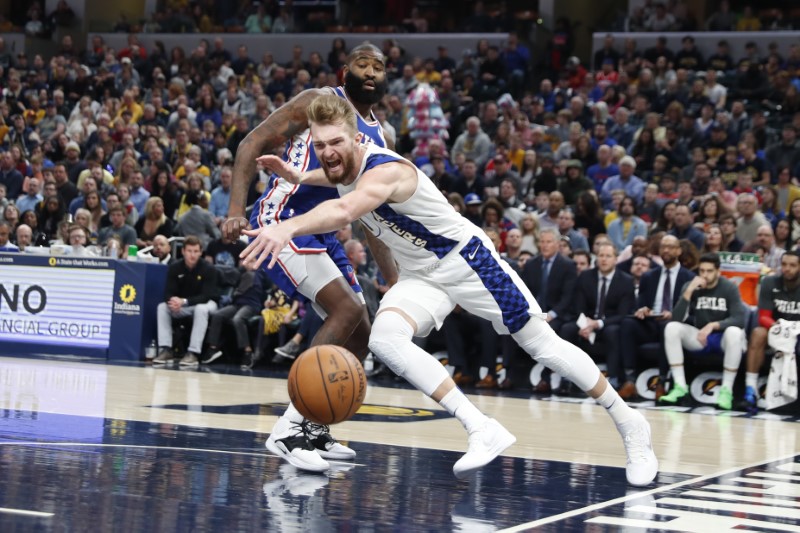 Domantas Sabonis had 23 points, 10 rebounds and five assists to carry the host Indiana Pacers past the Philadelphia 76ers 115-97 on Tuesday in Indianapolis.

T.J. Warren added 21 points, Myles Turner contributed 14 and Jeremy Lamb had 13 for the Pacers, who improved to 15-3 at home and snapped a two-game losing streak.

Ben Simmons had 18 points and 10 rebounds, but also had three assists against six turnovers for the Sixers. Josh Richardson led Philadelphia with 20 points but the Sixers looked out of sync from start to finish without All-Star center Joel Embiid.


Embiid was nursing a sore left knee and the Sixers fell to 3-4 without him this season.

Since soundly defeating the Milwaukee Bucks 121-109 on Christmas, the Sixers have dropped three straight road games in Orlando, Miami and now Indianapolis.

The Pacers received a big lift with the return of Malcolm Brogdon after he missed the three previous games. But Brogdon missed all five shots, aggravated his back and excited the game in the first quarter.

Still, the Pacers took advantage of Embiid’s absence and bolted to a commanding 67-43 advantage at halftime. Warren led the way with 21 points and knocked down all nine of his shots in the first half.


Simmons paced the Sixers with 12 points and seven rebounds by halftime.

Indiana began the third quarter just as strong. When Lamb stole the ball and drained a 3-pointer from the wing, the lead was 78-49 with 9:17 left. Sabonis scored the Pacers’ next six points and the lead swelled to 35.

The Sixers continued to struggle mightily with their shooting and weren’t able to cut much into the lead as they trailed 96-66 after the third. Tobias Harris’ tip-in actually sliced the lead to 30 with 2.3 seconds remaining.

Midway through the fourth, the Sixers twice trailed by 29.