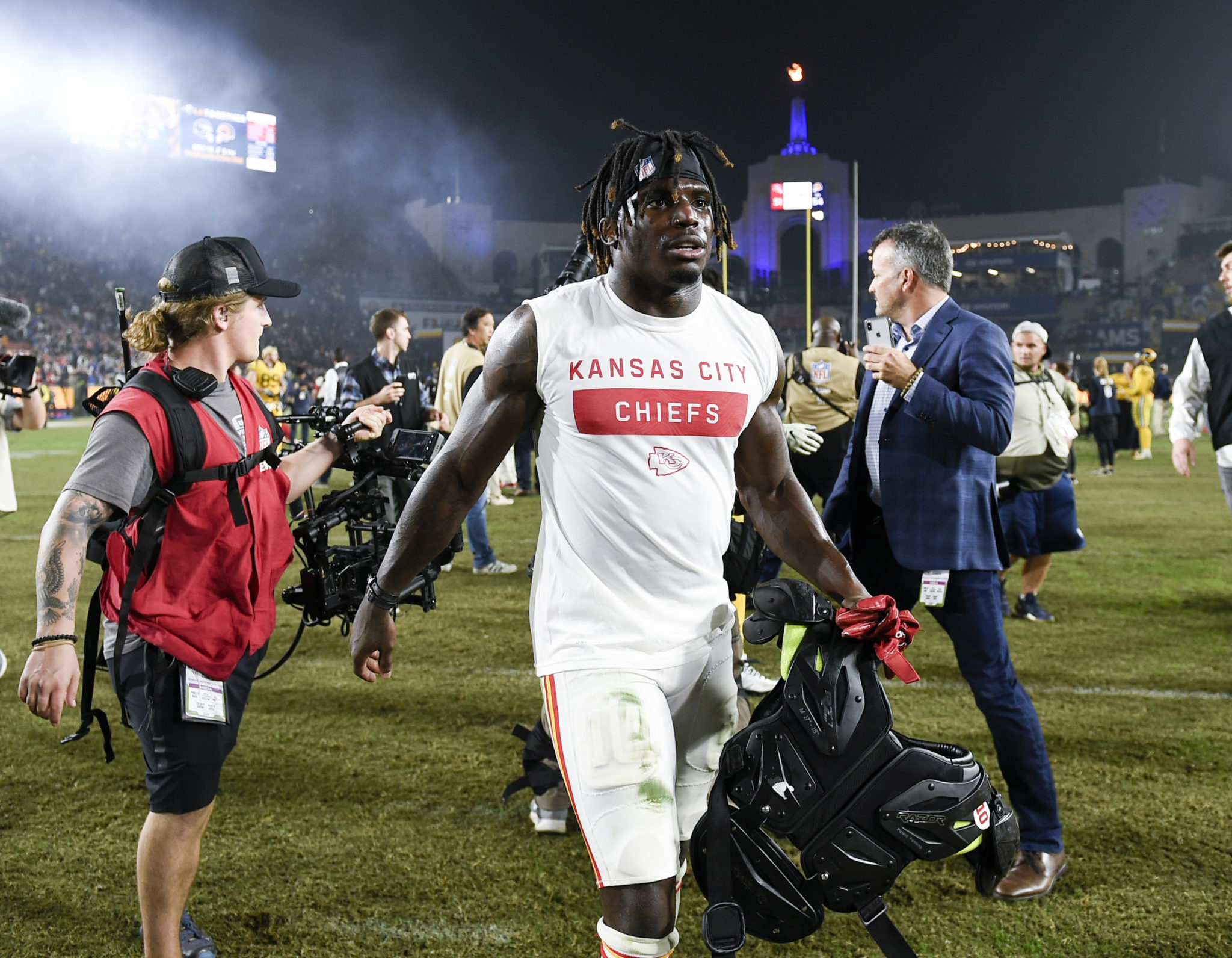 FILE - In this Nov. 19, 2018, file photo, Kansas City Chiefs wide receiver Tyreek Hill walks off the field after an NFL football game against the Los Angeles Rams, in Los Angeles. The Kansas City Chiefs have made a habit of inciting controversy during the NFL draft in the Andy Reid era by acquiring players that have a history of off-the-field issues. The team took a chance on cornerback Marcus Peters, who was traded away after getting into trouble with coaches. It drafted running back Kareem Hunt, then quickly cut him when he kicked a woman in a hotel hallway. And it picked wide receiver Tyreek Hill, who is currently dealing with a domestic violence case that centers on the 3-year-old child he shares with his fiance.(AP Photo/Kelvin Kuo, File)

OVERLAND PARK, Kan. — Police were called to the home of Kansas City Chiefs wide receiver Tyreek Hill shortly after a television station aired an audio recording in which he and his fiancee discuss injuries to their 3-year-old son — a case that gotten the star player suspended and focused attention on a prosecutor’s decision not to file domestic abuse charges.

Several media outlets reported Friday that Overland Park police went to the home of Hill and his fiancee, Crystal Espinal, on Thursday night after receiving an anonymous call from someone worried about Espinal. According to the reports, Espinal was fine and officers were at the home for only a short time. A spokesman for Overland Park police didn’t immediately return a call from The Associated Press.

Police were called to the home twice last month and determined the boy had been injured. On Wednesday, Johnson County District Attorney Steve Howe said he would not file charges against Hill or Espinal even though his office believed a crime had occurred . He said available evidence didn’t establish who had hurt the child.

“As a prosecutor, as a father of four, yes, it frustrates me when someone hurts a child and you can’t do anything about it,” Howe said then. “One of the elements of a crime is you have to prove who that person is who committed the act.”

A day later, KCTV in Kansas City aired part of an 11-minute audio file in which Espinal tells Hill earlier this year that when the boy was asked about his injured arm he replied: “Daddy did it.”

Hill denied any role in what happened to the child, saying: “He says Daddy does a lot of things.”

Espinal also tells Hill their son is “terrified of you.”

Hill replies, “You need to be terrified of me, too, bitch.”

Later, Espinal asks Hill, “What do you do when the child is bad? You make him open up his arms and you punch him in the chest.”

Howe has not responded to requests for comment about the audio recording, which the TV station said has been provided to his office. KCTV said the recording is believed to have been made in March when the parents were walking through an airport in Dubai. The station said Espinal sent it to at least one friend and was shared with KCTV “by someone who is concerned about the welfare of the couple’s child.”

The Chiefs have suspended Hill while the team looks into the developments. The NFL could also punish Hill under its personal conduct policy.

Last year, the Chiefs released star running back Kareem Hunt following a video that showed him pushing and kicking a woman in a hotel hallway. Hunt is suspended for the first eight games of the upcoming season but has signed a one-year deal with Cleveland, where general manager John Dorsey is the executive who signed Hunt while he was with the Chiefs.