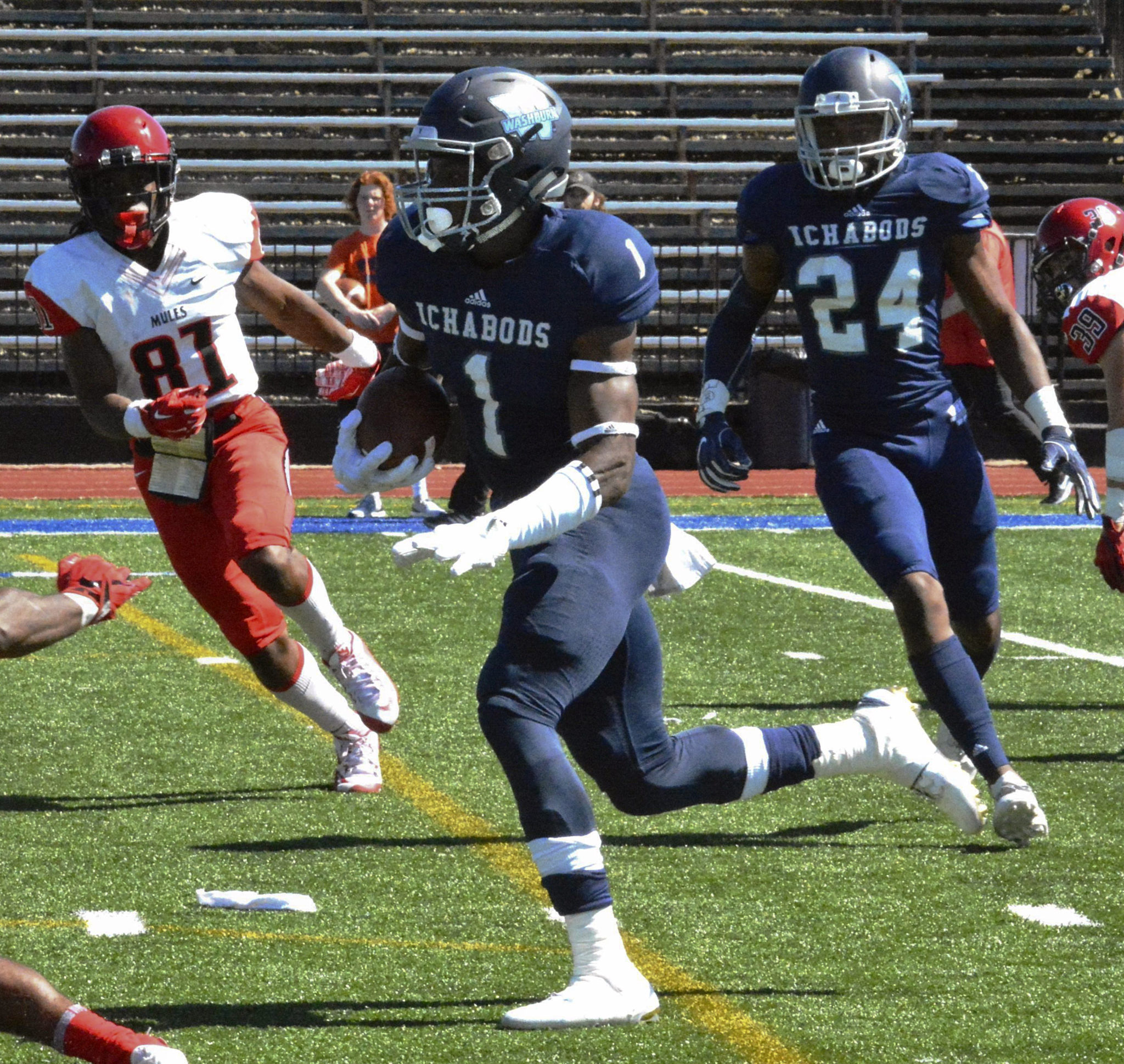 In this Sept. 22, 2018 photo, Washburn defensive back Corey Ballentine carries the ball during an NCAA college football game in Topeka, Kan. Police in Kansas are investigating a shooting that killed one current Washburn University football player and injured a former player just hours after he was drafted by the New York Giants. Topeka police say officers found 23-year-old defensive back Dwane Simmons dead when they investigated gunshots shortly before 1 a.m. Sunday, April 28, 2019. Ballentine is the wounded player who was picked by the Giants in the sixth round of the NFL draft Saturday. (Phil Anderson/Topeka Capital-Journal via AP)

TOPEKA, Kan. — The father of a Washburn University football player who was killed in a weekend shooting in which a New York Giants draft pick was wounded said the crime “shattered a lot of people.”

Navarro Simmons said his family learned from detectives that his son, Dwane Simmons, and his son’s friend, cornerback Corey Ballentine, were about to leave an off-campus party early Sunday when a vehicle pulled up. He said the people inside asked a question and then started shooting.

Dwane Simmons was killed and Ballentine, who was drafted only hours earlier, was rushed to a hospital, where he was in stable condition.

“This was a senseless murder,” Navarro Simmons said at a Sunday gathering of more than two dozen family members and friends in Kansas City. “This shattered a lot of people.”

Gretchen Koenen, a police spokeswoman, said in an email Monday that no arrests have been made. She said investigators have been speaking to some of the dozens of people who were at the party and that they hope to interview more. Police haven’t released a possible motive or said if they’ve identified any suspects.

“We want to emphasize that we need those who were present to let us know what they saw,” Koenen said.

Ballentine, whom the Giants drafted in the sixth round on Saturday, is recovering. Although authorities haven’t disclosed the nature of his wounds, the university issued a statement saying the 23-year-old Topeka native is expected to make a full recovery. Washburn scheduled a news conference for Sunday for Ballentine to discuss being drafted but hastily canceled it after he was shot. It hasn’t been rescheduled and the university isn’t planning a news conference.

Simmons told The Topeka Capital-Journal last fall how his injuries had affected his outlook.

“It’s more than a game to me now,” Simmons said. “I came in as a walk-on and had to earn a scholarship, then tore an ACL, redshirted and tore another one. It really puts everything in perspective that this game can be taken away from you in a blink of an eye. So I take this game to heart. I get emotional about this stuff and I take this game very, very seriously, and I’m having a great time.”

The Giants issued a statement Sunday saying the team was aware of the shooting and was gathering information about it.

“We have spoken to Corey, and he is recovering in the hospital. Our thoughts are with Dwane Simmons’ family, friends and teammates and the rest of the Washburn community,” the team said.