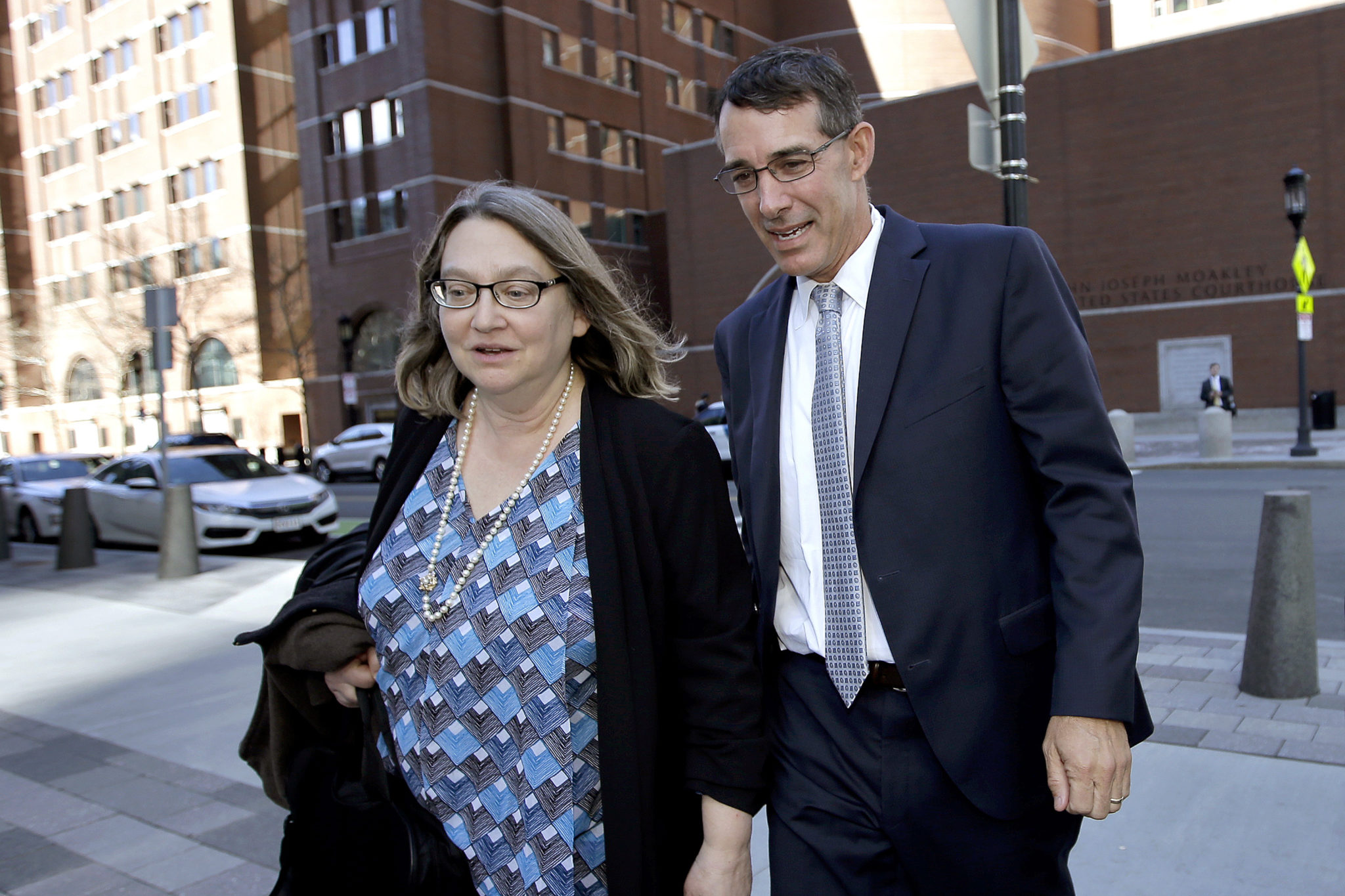 FILE - In this April 24, 2019 file photo Michael Center, right, former men's tennis coach at the University of Texas at Austin, departs federal court with an unidentified woman after he pled guilty to charges in a nationwide college admissions bribery scandal. Since dozens of wealthy parents and coaches at elite universities were arrested in March, two parents and two coaches, including Center, have agreed to cooperate with authorities. (AP Photo/Steven Senne, File)

BOSTON — Federal prosecutors said all along that they expect more people to be charged in the sweeping college admissions scandal. Their secret weapon? The cooperation of some parents and coaches who have already agreed to plead guilty, observers say.

“You can rest assured that there is going to be a new wave of indictments,” said former federal prosecutor Bradley Simon. “They wouldn’t need so many cooperators for existing cases. What seems to me is that these individuals who are cooperating are helping the government to make new cases,” he said.

The parents and coaches’ cooperation could also spell doom for others who are digging in their heels and still fighting the charges, including actress Lori Loughlin and her fashion designer husband, Mossimo Giannulli. They are among 19 parents disputing the allegations.

Among those known to be working with authorities is Laura Janke, the former University of Southern California assistant women’s soccer coach who was paid by consultant Rick Singer to create fake athletic profiles to make the children of “Full House” star Loughlin and a slew of other parents look like star athletes, officials say.

She could spill information about other USC figures charged in the case, including another soccer coach and athletic department official. She could also bolster the testimony of Singer, who will likely be painted by defense attorneys as a liar trying to take down the parents in order to save himself.

“If I were one of those parents, I would be very nervous about (Janke),” said Simon, now a white-collar criminal defense lawyer at Phillips Nizer LLP, of New York.

Janke agreed in 2017 to create a profile portraying Loughlin’s and Giannulli’s younger daughter, YouTube star Olivia Jade Giannulli, as a competitive rower, authorities say. The teenager was admitted to USC as a crew recruit even though she didn’t play the sport, authorities say.

Loughlin and Giannulli, who have pleaded not guilty to paying $500,000 in bribes to get their daughters into USC, haven’t publicly commented on the allegations. Janke’s lawyer declined to comment Tuesday.

The only parents cooperating so far are a married couple, who pleaded guilty in Boston federal court Wednesday to paying $600,000 to get their daughters into USC and the University of California Los Angeles. Bruce Isackson, a real estate developer from Hillsborough, California, and his wife, Davina, have said they take full responsibility for their “bad judgment.”

The couple could tell investigators about other school officials or coaches who might have been in on the scheme, experts say. Their testimony could also make it more difficult for parents to argue they didn’t know what Singer was doing with their money or were duped by him.

“The key issue in this case is absolutely what their intent was,” said Laurie Levenson, a professor at Loyola Law School, Los Angeles. “Did they know they were crossing a line and paying bribes? The more people who say, ‘Yes, we all knew,’ the better it is for the prosecution,” said Levenson, who used to work as a federal prosecutor.

Attorneys for the Isacksons declined to comment Tuesday. The couple left the courthouse without answering questions from reporters.

Since dozens of wealthy parents and coaches at elite universities were arrested in March, four defendants have signed cooperation agreements with prosecutors. Singer, along with a former Yale University coach and a man who cheated on entrance exams for students, had already been secretly working with investigators before the charges were announced.

What exactly cooperators have offered investigators remains unclear. They have all promised to testify for prosecutors, if asked, in hopes of getting a shorter prison sentence.

John Cunha Jr., a lawyer for former University of Texas at Austin men’s tennis coach Michael Center, declined to comment on the coach’s cooperation agreement after he pleaded guilty last week to accepting $100,000 to help a student get into the school.

Fourteen parents, including actress Felicity Huffman, have agreed to plead guilty . Huffman, the Emmy-winning star of “Desperate Housewives,” is scheduled to appear in Boston federal court May 13 to admit to charges she paid $15,000 to have someone rig her daughter’s SAT score.

Alanna Durkin Richer is a reporter for The Associated Press.