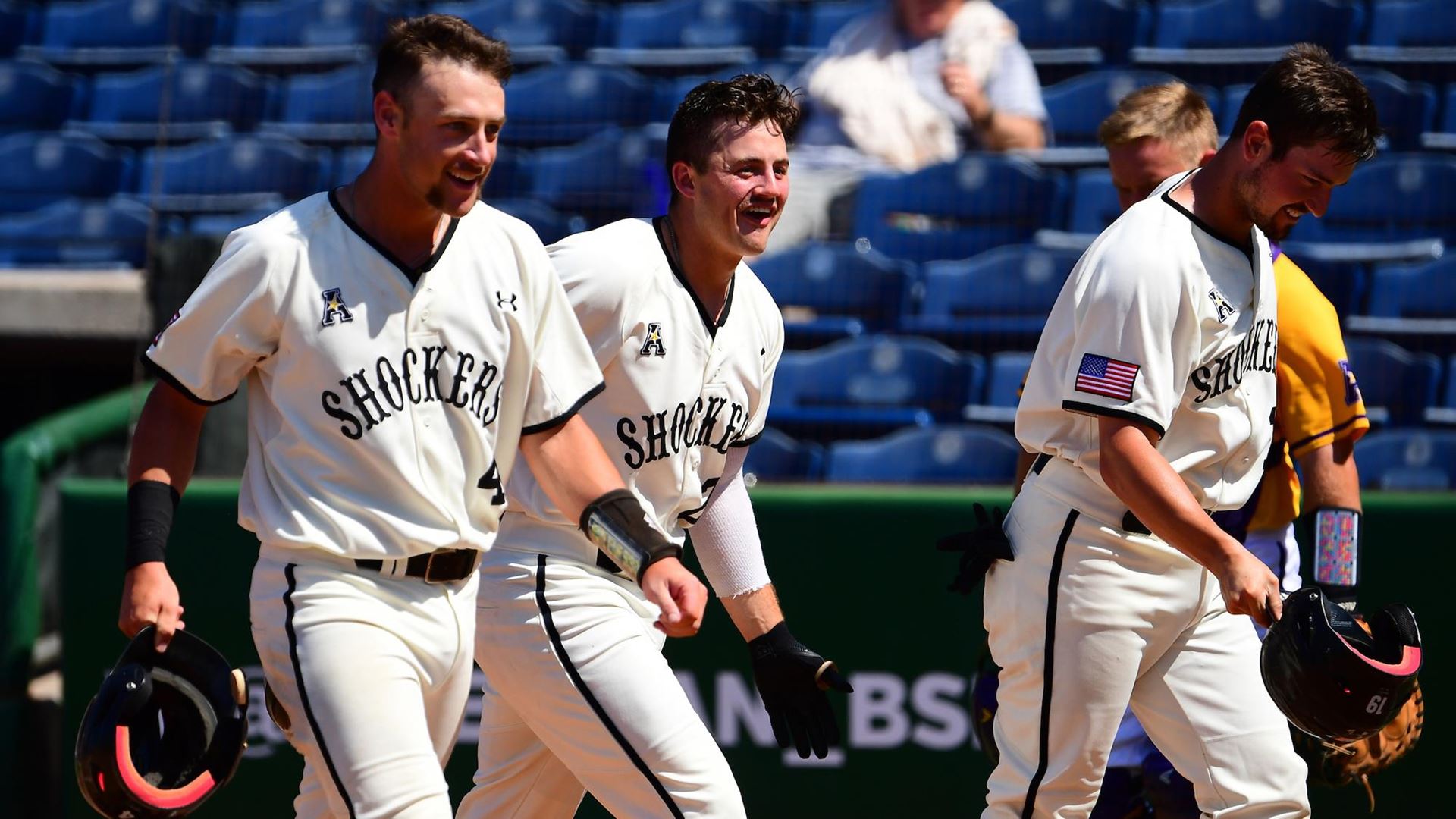 Redshirt senior Mason O’Brien hit a grand slam and a two-run homer as eighth-seeded Wichita State Shockers (28-30) upset eighth-ranked East Carolina (43-15) for the second time in the American Athletic Conference (AAC) tournament, eliminating the top-seeded Pirates from the tourney in a 12-5 pounding at Spectrum Stadium in Clearwater, Florida, on Friday afternoon.

WSU infielders Jordan Boyer, Luke Ritter and Paxton Wallace each had two hits in the contest, as did designated hitter Jack Sigrist and outfielders Jacob Katzfey and David Vanvooren.

Right-handed sophomore Liam Eddy (5-8), who tied his career-high of seven strikeouts while yielding three runs on eight hits, was credited with the victory while ECU’s Jake Kuchmaner (6-2), allowing more than three earned runs for the first time this season, was tagged with the loss.

With the upset victory, Todd Butler’s WSU Shockers advance to Saturday’s AAC semifinals for the first time in program history.

Wichita State will face fourth-seeded UConn (35-22) in an early morning 10 a.m. contest and will have to beat the Huskies twice on Saturday to advance to Sunday’s winner-take-all championship game. A second game, if necessary, will be played after a semifinal contest between Cincinnati and UCF.

Connecticut, which hasn’t lost a game in the double-elimination tournament, defeated Wichita State 9-7 on Thursday. The Huskies also won their tournament opener, defeating Houston 4-3 on Tuesday.

In the tournament’s only other game on Friday, sixth-seeded UCF (36-21) remained in contention for the AAC championship with a 6-2 win over third-seeded Tulane (32-26) — a loss that eliminated the Green Wave from the tournament.

Senior Matthew Mika and redshirt junior Anthony George homered and Tyler Osik smacked a two-run double for UCF, which took two out of three against Tulane during the regular season.

Junior infielder Kody Hoese, the AAC Player-of-the-Year who doubled and hit a single in four trips to the plate, and shortstop Sal Gozzo, who went 2-for-3, were the only Tulane players with multiple hits in the season-ending loss.

Starting pitcher Jordan Spicer (3-0), a right-handed senior from Hialeah who went the distance on the mound, was credited with the victory while Tulane starter Chase Solesky (6-4) suffered the loss.

The Knights, who lost to Tulane 5-2 in their opening game of the double-elimination tournament and overcame a three-run deficit in defeating seventh-seeded Memphis 8-7 in ten innings on Wednesday, will play Cincinnati (28-29) at 2 p.m. this afternoon. A second game, if necessary, will be played tonight at 8:30 p.m.

UCF, playing with its back to the wall since the beginning of the six-day tournament, will have to defeat the Bearcats twice today to advance to Sunday’s championship game.

Like UConn, Cincinnati is unbeaten in the tournament with an 11-6 mauling of Memphis in the opening round on Tuesday and an 8-4 victory over Tulane on Thursday.