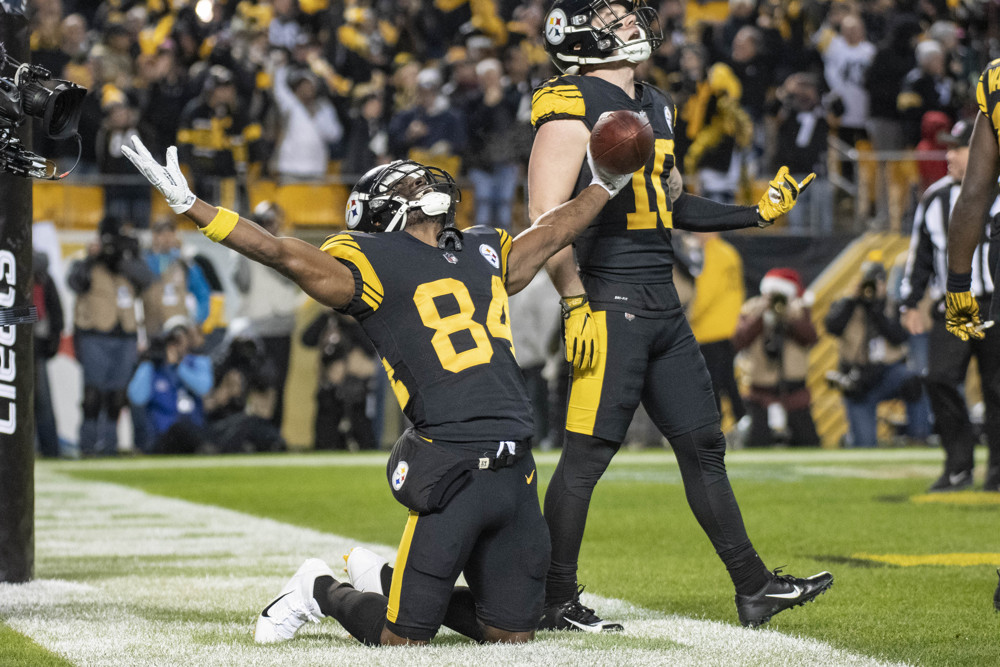 A person with direct knowledge of the situation has told The Associated Press that the Oakland Raiders have an agreement to acquire receiver Antonio Brown in a trade with the Pittsburgh Steelers.

Brown will reportedly sign a new three-year deal with the Raiders that will pay him $50.125 million instead of the $38.925 million he was owed by the Steelers. The deal also includes $30 million guaranteed, compared to none remaining in his old deal.

The person spoke Saturday night on condition of anonymity because the trade and new contract can’t be completed until the new league year starts Wednesday.

Pro Football Talk first reported the deal and says Pittsburgh will get third and fifth-round draft picks from Oakland.

Meanwhile, a pair prospective suitors have cropped up in the days since the Kansas City Chiefs placed the franchise tag on outside linebacker Dee Ford with a potential eye toward making a trade.

Both NFL Network’s Ian Rapoport and ESPN’s Adam Schefter reported that the Chiefs are looking to deal the pass-rushing specialist. Additionally, Rapoport reported that the San Francisco 49ers and Green Bay Packers have expressed interest in dealing for Ford.

He would have to sign the franchise tender before any deal could be made.

Elsewhere in the NFL…

— The Dallas Cowboys will keep linebacker Sean Lee in 2019 after agreeing to a restructured deal, NFL Network reported.

Per the report, Lee will make at least $3.5 million, with incentives boosting his possible earnings up to $7 million, which was his original salary for 2019.

Lee, 32, was entering the final year of his contract and set to count $10.1 million against the cap.

— Running back Carlos Hyde signed a one-year deal with the Kansas City Chiefs, the team announced.

The deal is worth $2.8 million with $1.6 million guaranteed, according to ESPN.

Hyde, 28, was released by the Jacksonville Jaguars on Friday. He split last season with the Cleveland Browns and Jaguars and rushed for a combined 571 yards and five touchdowns in 14 games.

Addae recorded 75 tackles while starting all 16 games last season. He started 59 of 80 games played in six seasons with the Chargers, recording two interceptions and 4.5 sacks.

— Tight end Dwayne Allen has agreed to a two-year contract worth a reported $7 million contract with the Miami Dolphins.

Allen, who had 13 receptions for 113 yards in two seasons with New England, recently was cut by the Patriots. He will be playing for new coach Brian Flores, the former New England defensive coordinator.

–The New Orleans Saints agreed to a three-year, $9 million contract with safety Chris Banjo, according to the NFL Network. Banjo had two interceptions last season but primarily has worked on special teams during six NFL seasons with the Green Bay Packers (2013-16) and Saints (2016-18).

–Defensive tackle Michael Pierce and linebacker Patrick Onwuasor are expected to receive second-round tenders from the Baltimore Ravens, according to the NFL Network. Both players are restricted free agents.

Hardman, a North Texas product, was the No. 9 overall pick in the 1970 NFL Draft by San Francisco. He played 10 seasons with the 49ers and earned two Pro Bowl berths and a pair of All-Pro honors, then finished his career with two seasons in Oakland.

Sacks did not become an official statistic until 1982, but the 49ers credit Hardman with a franchise-most 112.5 during his time with the team. He ranks No. 5 all-time in Niners history in games played by a defensive lineman.