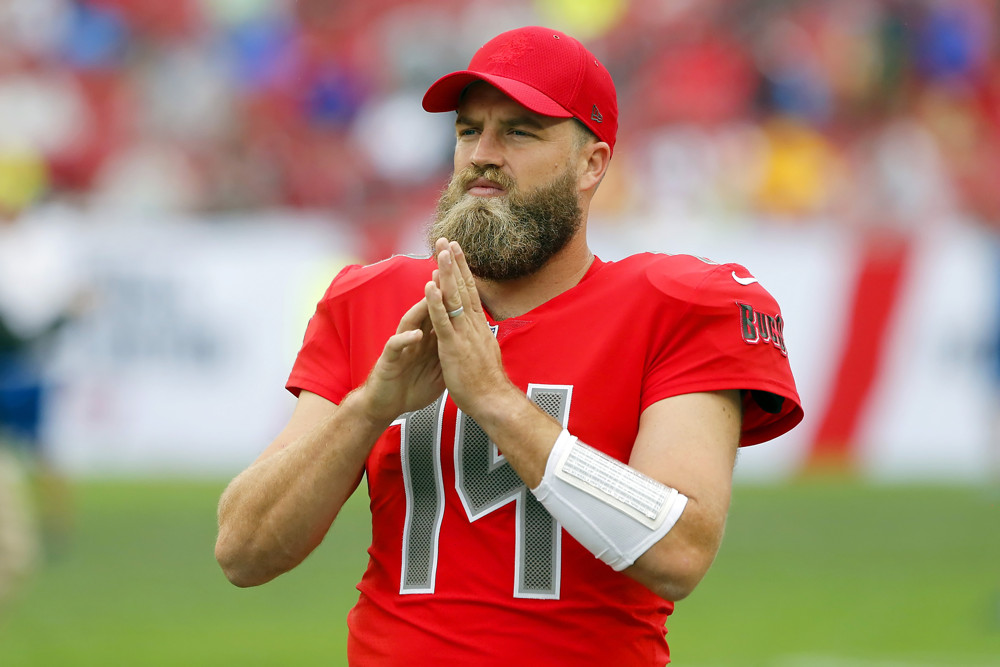 TAMPA, FL - DEC 09: Ryan Fitzpatrick (14) of the Bucs appears to be saying a prayer while warming up during the during the regular season game between the New Orleans Saints and the Tampa Bay Buccaneers on December 09, 2018 at Raymond James Stadium in Tampa, Florida. (Photo by Cliff Welch/Icon Sportswire)

For a graduate of Harvard, Ryan Fitzpatrick certainly has a difficult time keeping a job.

He keeps getting fired and having to move on to a new city.

But that’s OK because he’s made almost $69 million in the process since 2005. And not many of his Harvard classmates can top that figure.

He wasn’t drafted until the seventh round in 2005 as the 250th overall pick by St. Louis.

He has played for six other teams besides the Rams, which have since moved to Los Angeles.

I wonder if he could rattle off all their names without thinking about it?

For the record, the others are Cincinnati, Buffalo, Tennessee, Houston, the Jets and Tampa Bay.

Miami became his eighth team Sunday when he agreed to a two-year deal for $11 million. That contract could balloon as high as $17 to $20 million depending on how plays.

The Dolphins signed him to keep the seat warm until they draft their quarterback of the future, either this year or next.

They moved on from Ryan Tannehill last week and he has since signed with Tennessee.

Fitzpatrick is the classic definition of a journeyman quarterback. He has started at least 10 games in seven seasons and has appeared in 141 games, starting 126 of them and going 50-75-1.

He’s had his moments. Last year, he became the first player in NFL history to pass for 400 yards in three consecutive games while filling in for suspended Jameis Winston.

The Bucs lost the third one to Pittsburgh 30-27 when he threw for 411 yards and three touchdowns but also threw three picks. That’s Fitzpatrick. Always inconsistent. The next week he threw for only 126 yards against Chicago and the Bucs lost 48-10. And he lost the job to Winston.

When Winston was injured, Fitzpatrick got another opportunity but finished 2-5 for the season, although he had a passer rating of 100.4 — the best of his career — from throwing 17 touchdowns and 12 picks. He also got a fourth 400-yard passing game, joining Peyton Manning and Dan Marino as the only quarterbacks to do that.

The Dolphins didn’t inspire much as they tried to find a replacement for Tannehill. They first targeted Teddy Bridgewater but he decided to sign with New Orleans, so they settled on Fitzpatrick.

The puzzling thing is that there were two Super Bowl winning QBs on the market this year — Joe Flacco and Nick Foles — but the Dolphins decided to target Bridgewater instead.

That raised more questions about whether the Dolphins, who have been looking for a franchise quarterback since Dan Marino retired, will know how to find the right one.

Oh, there’s another quarterback on the market who made a Super Bowl. His name is Colin Kaepernick.

The Dolphins would have been the perfect team to take a look at Kaepernick, who is 36, and see what he could do before they go draft their quarterback of the future.

But, like the other 31 teams, they refused to bring him in.

The Dolphins are the third AFC East team that Ryan Fitzpatrick will have played for. Maybe he can play in all four if the Patriots sign him as a fill-in when Tom Brady retires.

Fitzpatrick’s calling card is: Have arm, will travel.

Living proof there is a shortage of good quarterbacks in the NFL, Fitzpatrick is smart enough to know he will never be an elite QB and has made tens of millions despite that fact.