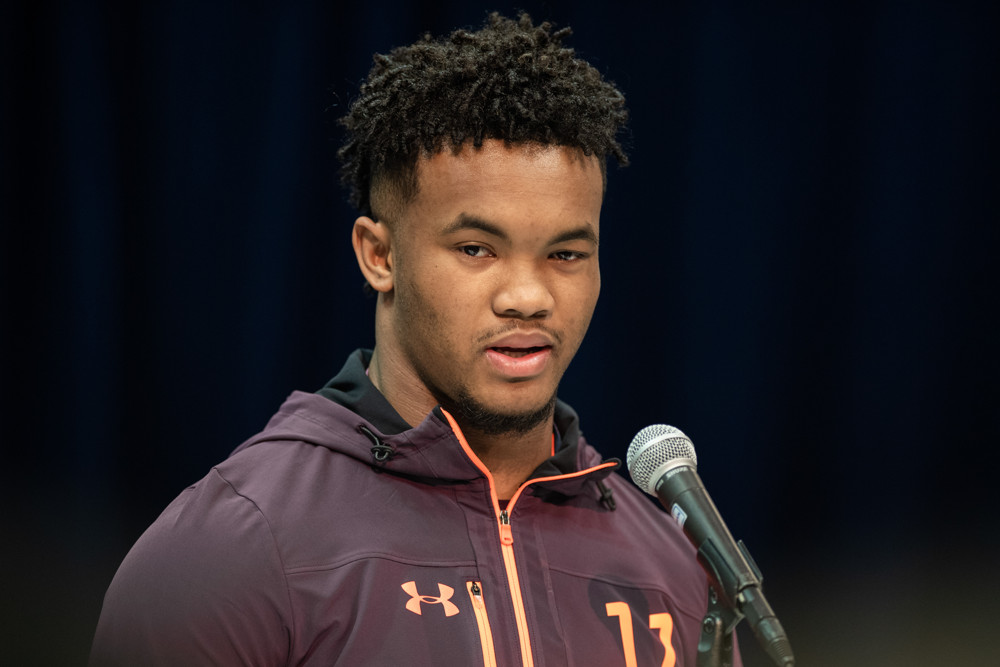 INDIANAPOLIS, IN - MARCH 01: Oklahoma quarterback Kyler Murray answers questions from the media during the NFL Scouting Combine on March 1, 2019 at the Indiana Convention Center in Indianapolis, IN. (Photo by Zach Bolinger/Icon Sportswire)

Unlike the 2018 NFL Draft, when the Cleveland Browns kept us guessing until practically draft night, the first overall pick seems to have been preordained for months.

There remain whispers about whether ownership is on board, and as long as the Arizona Cardinals still have Josh Rosen on their roster, we can’t be absolutely certain first-year coach Kliff Kingsbury will draft his former high school recruit, Kyler Murray, with the top pick.

But for now, there’s no reason to expect a late surprise – on that would set off an entirely different chain of events. Even with Murray penciled in at No. 1, it’s anybody’s guess where the other top quarterbacks wind up.

The importance of Murray’s mobility in Kingsbury’s offense is overstated, but if you’re going to hire an offensive coach, why not let him pick his quarterback?

Acquiring Dee Ford won’t change the 49ers’ approach here — Bosa is a perfect complement, as a bigger, powerful end who can win outside and inside as a rusher while also stopping the run.

The Jets desperately wish to trade down, and most have Quinnen Williams or Josh Allen here if they stay, but don’t rule out roll the dice on Oliver’s unique athleticism.

Josh Allen or Devin White could be in play here, but Williams is the best player on the board. A potential shocker cannot be ruled out: Drew Lock.

With Josh Allen still available, this is tricky. While the Bucs need more edge rush, Todd Bowles’ scheme creates pressure via blitzes, and White is a classic modern-day linebacker who can blitz, cover and play the run.

T.J. Hockenson would be an option, but Taylor makes too much sense. He fills the Jags’ hole at right tackle perfectly, as a mauler who excels in a power run game.

The Bills addressed a bunch of spots in free agency so they could take the top player on their board. They might hope Hockenson is still there, but with him gone, they grab one of the draft’s best athletes.

Many believe the Broncos are targeting a second- or third-tier quarterback to develop behind Joe Flacco. Would Haskins slipping to No. 10 change their mind?

This would be bold for a notably conservative organization, but if Zac Taylor wants to pick his QB, it’s hard to argue against him. Devin Bush would be in play if it’s not a QB.

The Packers added Billy Turner in free agency, but Williams could be an upgrade at left guard over Lane Taylor while serving as insurance and the successor to oft-injured right tackle Bryan Bulaga.

Miami let Ja’Wuan James walk and hasn’t replaced him, so Dillard (or Williams or Cody Ford) could fill the hole at right tackle. Clelin Ferrell would also be a perfect fit in Brian Flores’ defense.

Wilkins would slot in next to fellow Clemson product Grady Jarrett inside as a disruptive penetrator with terrific character.

With some concerned about his heart issue, Sweat slides a tad, and Washington nabs a dynamic rusher opposite Ryan Kerrigan.

Julius Peppers is finally retired, and Bruce Irvin isn’t the answer. Burns can threaten early as a situational rusher while adding power to be a full-time starter down the line.

If the Giants don’t love any of the top quarterbacks but — as believed — like Jones, it would be sensible to wait and see if he reaches No. 17.

The Vikings might prefer a left tackle — which would bump Riley Reiff to left guard — but with Williams and Dillard gone, they take perhaps the draft’s best interior lineman.

The Titans’ offense needs an injection of speed, and nobody in this draft has more of it than Brown. Lindstrom would also be in consideration if available.

Bush could land closer to the top 10, but if he slips this far, Pittsburgh should pounce. The Steelers have needed speed at inside linebacker since Ryan Shazier’s injury.

The Seahawks likely hope to trade down, as is their norm in Round 1, but more help on the edge makes sense with Frank Clark’s future unclear.

A solid, scheme-versatile pivot, McCoy might fit the Ravens better than Garrett Bradbury, who played in a predominant outside-zone scheme at NC State.

With Taylor, Dillard and Williams gone, Houston opts to wait on offensive tackle and reinforce a weakened secondary instead.

While the Raiders need more reinforcements on defense, Jared Cook’s departure leaves the team with no receiving threat at tight end. Jon Gruden can’t help himself.

If Bradbury reaches 25, I love this pick. He would provide insurance for Brandon Brooks (torn Achilles) at right guard and eventually take over at the pivot when Jason Kelce retires.

Metcalf has a wide range of possible landing spots, but his combination of size and speed would make sense for Indy if he gets this far.

I could see Gruden gambling on Jeffery Simmons, but since the Raiders already nabbed a defensive tackle in Quinnen Williams, they opt for a cornerback here.

The Chargers re-signed Brandon Mebane, but he’s 34 and got only a two-year deal. Lawrence would immediately fortify the run defense, with pocket-pushing potential down the line.

Don’t be shocked if they pick a wideout, but with the value not lining up here, the Chiefs add much-needed help to the secondary.

A late riser, Savage can play all over the place — single-high, two-deep, in the box or over the slot — making him a perfect fit in Mike Pettine’s scheme.

L.A. lost interior linemen Rodger Saffold and John Sullivan and has yet to replace them. Ford would compete at left guard, perhaps starting from Day 1.

Smith is a better blocker on the move than inline, so the offense would require some adaptation, but he’s a dangerous receiver who thrives after the catch, which is critical in Josh McDaniels’ horizontal passing game.