DeChant’s round one winners and losers of the NFL Draft 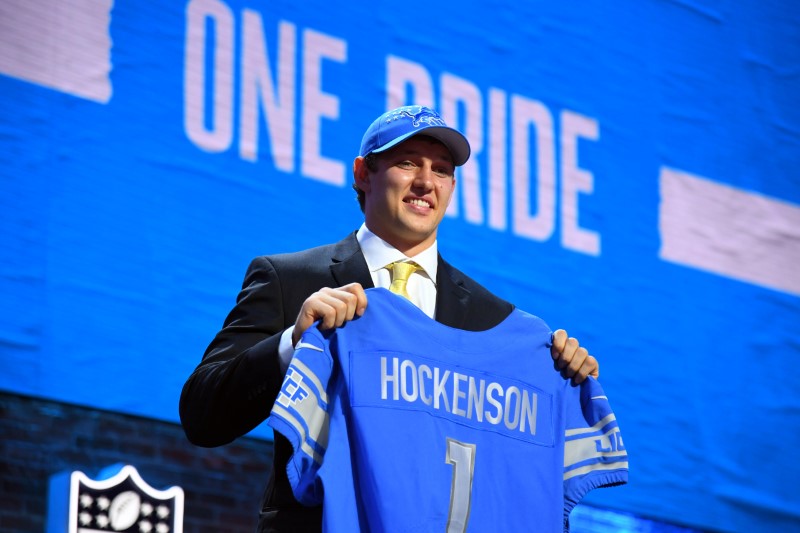 Apr 25, 2019; Nashville, TN, USA; T.J. Hockenson (Iowa) is selected as the number eight overall pick by the Detroit Lions in the first round of the 2019 NFL Draft in Downtown Nashville. Mandatory Credit: Christopher Hanewinckel-USA TODAY Sports

Only the first 32 picks are in the books, but the winners and losers after Day One of the NFL draft were abundantly obvious.

Here’s a look at the best and worst of the first round:

A tight end at No. 8 feels rich, especially when you consider the last top-10 tight end in the NFL draft was Eric Ebron, who disappointed in Detroit after going 10th overall in 2014.

Don’t fret, Lions fans. Hockenson is a far more complete and much safer prospect than Ebron, but he still has plenty of upside. His blocking is well documented — he regularly handled defensive ends and often buried linebackers and defensive backs at Iowa — but he is also an excellent receiver.

Hockenson isn’t as athletic as Hawkeye teammate Noah Fant, but he’s a much better route-runner, showing the nuance to set up defenders and find soft spots in zones. He’s also far from a slouch as an athlete, with the speed to threaten up the seam and the power to bulldoze defenders after the catch.

With plenty of pre-draft smoke connecting Oliver to the New York Jets, Oakland Raiders, New York Giants and even the Atlanta Falcons via a trade-up, it seemed the Bills wouldn’t have a shot at him. Instead, after surprise picks at Nos. 4 and 6 overall, Oliver slid right into Buffalo’s lap.

With Kyle Williams retiring, the Bills needed more interior pass rush, and Oliver’s athleticism will fit very well next to 2017 third-round pick Harrison Phillips. Oliver isn’t nearly as polished as a pass rusher as Aaron Donald was when he came out in 2014, but he has comparable explosiveness for his size and will be a disruptor — if not a finisher — from Day 1.

Leaks sprung like crazy from Washington over the last few days, painting an unflattering picture of an organization in disagreement. Reports on Thursday said owner Dan Snyder and team president Bruce Allen loved Haskins, while head coach Jay Gruden and some others preferred Daniel Jones.

But Washington wound up with the better prospect, and did so without having to trade up. Despite being a redshirt sophomore and one-year starter, Haskins is far more mentally advanced than most college quarterbacks. He ran a pro-style offense and read the field very well at Ohio State, and he has an excellent arm and the accuracy to hit open receivers at all three levels.

Haskins should fit well in Gruden’s scheme — assuming Gruden is there beyond 2019, which is far from certain — and he could be afforded the opportunity to sit behind Case Keenum or Colt McCoy. Washington’s franchise is almost infamous for its instability, but this pick could very well bring a long-term answer at the game’s most important position.

With a trade back into Round 1 later Thursday night, Washington got another dynamite player in Montez Sweat, who slid due to reported medical and character concerns. I don’t love the price Washington paid — a 2020 second-round pick to jump from No. 46 to No. 26 — but Sweat is extremely explosive and should fit in well opposite Ryan Kerrigan.

Washington’s gains were indirectly a result of a division rival’s worrisome decisions.

If you have conviction about a quarterback, you should take him at your first opportunity, and the Giants did. But that doesn’t mean they picked the right quarterback.

Despite his cerebral reputation — as a Duke product who has worked with David Cutcliffe and Peyton and Eli Manning — Jones needs plenty of work. He ran a lot of half-field reads and worked primarily short and intermediate with the Blue Devils. He also made far too many poor decisions for a player whose arm is just OK. This one will look especially rough if Haskins develops into a star and Jones does not.

The Giants’ pick at No. 17 also raised some eyebrows. Lawrence is an excellent run defender but might never be a great pass rusher. If he tops out as a solid pocket pusher who gets to QBs now and then, he might only play 55 percent of the snaps. That’s not a great return for the top asset that the trade of Odell Beckham Jr. brought back.

It’s also odd that the Giants traded Damon Harrison with the intention of moving Dalvin Tomlinson to nose tackle… and then added another nose tackle. They also have B.J. Hill, a promising third-round pick who had 5.5 sacks as a rookie. An edge rusher — and Sweat was there for the taking — would have made much more sense.

Getting Baker at No. 30 gives the Giants a nice, instinctive cover man, but they had to give up fourth- and fifth-round picks to get him.

Overall, that’s just too many question marks for a roster that needs a lot of work.

On one hand, the Raiders drafted three very good players and filled three holes. On the other, they made some questionable decisions when it came to value.

Very few evaluators pegged Ferrell as a top-10 pick, and virtually nobody had him going in the top five. It’s unclear if the Raiders tried to move down to add value while still getting Ferrell, but even if they tried and failed, there were better ways to get their guy.

It’s possible, perhaps probable, that Ferrell would have been available closer to the Raiders’ second pick at No. 24 than to their first at No. 4. With plenty of draft capital at their disposal, they could have worked the draft board and traded up into the mid-teens to grab him.

The player they wound up taking at No. 24, Jacobs, is an excellent talent and a well-rounded back who can block and catch. Still, there’s a convincing argument to be made that it’s never worth drafting a running back in the first round, given the fungibility and short shelf life at the position.

It’s harder to quibble with Abram, who brings tremendous physicality and energy, but his selection does appear to be a sign that former first-round pick Karl Joseph doesn’t have a future with the team.

With three first-round picks, including one in the top five, the Raiders simply could have gotten more value.

Perhaps Howard was the top-ranked offensive tackle on Houston’s board. And he might very well develop into an excellent player.

But this feels like a reach at a position of (dire) need. Jonah Williams was the first tackle off the board at No. 11, and the Philadelphia Eagles swooped in to nab Andre Dillard, the best pass protector in the draft, one pick in front of the Texans. Houston could have ensured itself Dillard with a modest trade-up, or it could have simply taken Jawaan Taylor, who some consider a top-10 prospect and was still on the board.

Instead, they opted for a raw, small-school prospect who might not be ready to start but could be forced into the lineup to protect Deshaun Watson. That sounds a lot like current left tackle Julién Davenport, who has not worked out thus far.