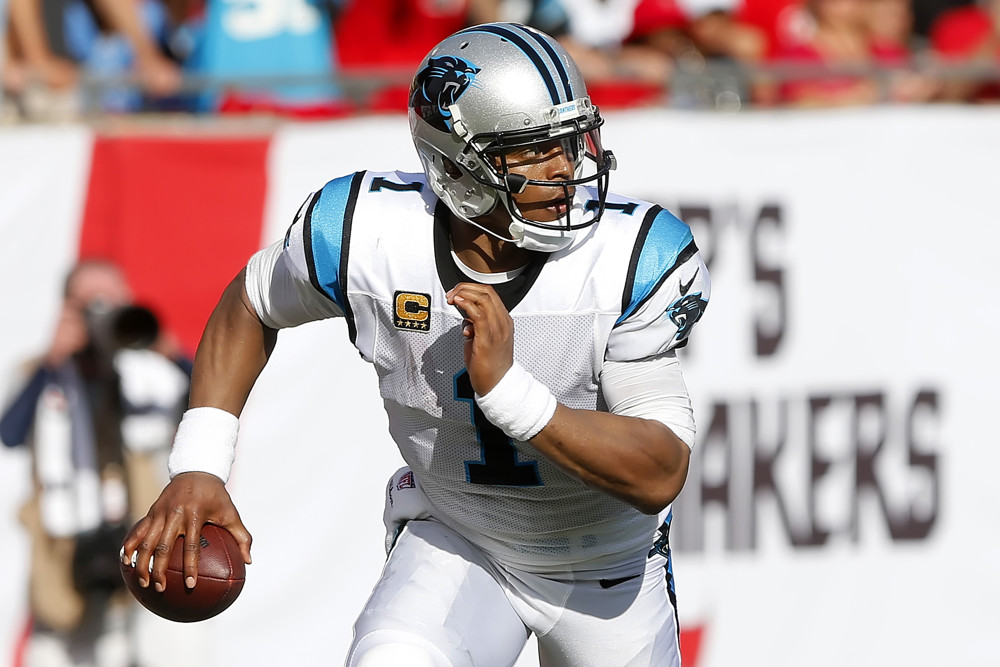 In this era when all the rules are designed to protect the quarterbacks, it is not unusual for the elite ones to play at a high level in their late 30s. And Tom Brady is still going strong in his 40s!

Which is why Cam Newton should be in his prime at age 30 looking ahead to playing another decade.

Instead, there will be a huge question mark over his head as the Carolina Panthers head into the 2019 season.

He has now undergone shoulder surgery twice in the last three seasons and the Charlotte Observer reported last week that Newton just started throwing a regular football overhead for the first time since undergoing his latest surgery last January.

Coach Ron Rivera says he is optimistic, and the Panthers hope he will be ready for training camp, or at least the regular season opener.

But Rivera showed how paranoid he is about reports of Newton’s progress or lack thereof that he complained Monday that a fan shot a video of Newton throwing last week.

“Somebody came in and took a picture, which we really don’t appreciate because this is private property,” he said.

“We really don’t appreciate the snooping on what’s going on here,” he said.

Although the practice fields have a fence covered with black cloth to prevent snooping, there are nearby buildings with windows that makes it easy for somebody to snoop.

But why should Rivera care about Newton being seen throwing in late May? It just shows how much is at stake as he tries to recover. Rivera is working for a new owner and another losing season could put his job in jeopardy.

And Rivera and the Panthers have to wonder if he now has chronic shoulder problems and if he can again become the same quarterback he was in 2015 when he won 48 of 50 votes for MVP honors while throwing 26 touchdown passes and one interception in the last eight regular season games.

Newton wound up with 35 touchdown passes and 10 interceptions in that season. He also ran for 636 yards and 10 scores to give the Panthers an extra dimension to their offense.

But the team must wonder if all that running has taken a toll on him. Newton has rushed 929 times for 4,808 yards and that is like a running back running 230 times for four years. And we all know that running backs have short careers.

To put Newton’s rushing numbers into context, Drew Brees has rushed only 471 for 758 yards in 13 seasons.

And quarterbacks also suffer big hits in the pocket. T.J. Watt of the Steelers lowered his helmet and drilled Cam’s shoulder last year.

The Panthers can only hope that their quarterback can rebound from this. When he had the latest surgery, it was described as a cleanup procedure, and the team doctor said the cartilage wasn’t as damaged as they thought. Newton had a partially torn rotator cuff repaired two years ago.

The one thing the Panthers do know is that they aren’t the same team without Cam or when the shoulder is bothering him.

And they didn’t go out to get a veteran backup in the offseason as an insurance policy. Their backups are Taylor Heinicke and Kyle Allen and they drafted Will Grier on the third round.

Last year, the Panthers were 6-2 when Newton’s shoulder started bothering him and then they lost six games in a row to fall to 6-8 before the team decided to have him sit out the final two games.

Newton had 15 touchdown passes and just four picks in the first half of the year and then went nine and nine the rest of the year.

He couldn’t throw deep. They even sent Heinicke in to throw the Hail Mary pass in two different games.

Newton was obviously frustrated by the injury because no matter what treatment he tried, he didn’t seem to get any better.

“I wish I could say what the injury is because I don’t really know what it is either,” Newton said late in the season last year. “No matter how much you push, no matter how much you ice, the anti-inflammatory you take, trust me I’ve done it. Acupuncture, massages. There is not a night that goes by without me getting some type of work done on my arm. You just don’t have the strength.”

That left another surgery as the only option.

Will it enable him to regain his old form?

The answer to that question will determine what kind of season Newton will have. Right now, nobody knows.