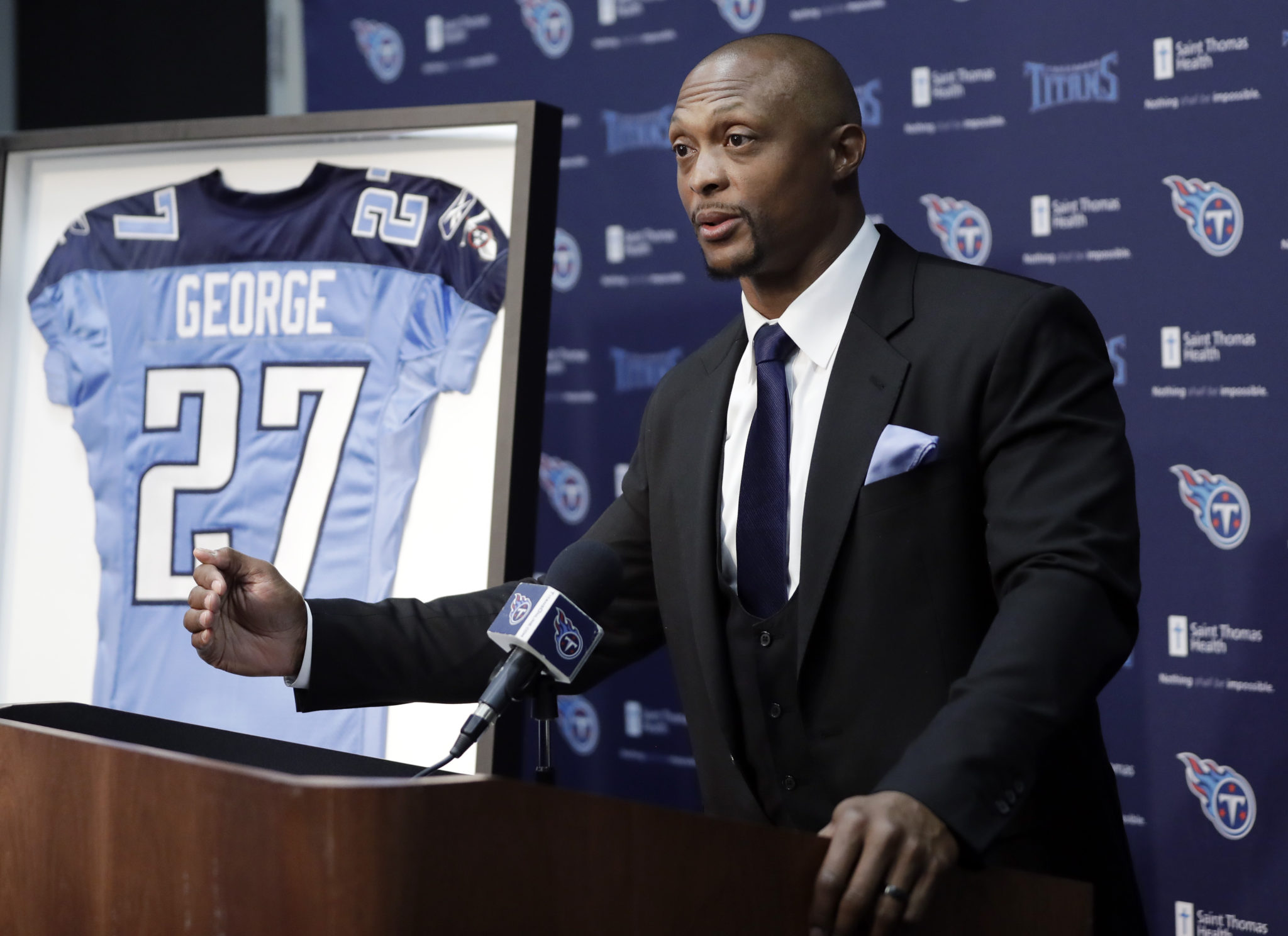 NASHVILLE, Tenn. (AP) — Nobody with the Titans will ever wear Eddie George’s No. 27 nor the No. 9 of the late Steve McNair again, players who helped the franchise through its difficult relocation from Houston to Tennessee to its lone Super Bowl berth.

Controlling owner Amy Adams Strunk announced Wednesday that the franchise will retire both numbers Sept. 15 at their home opener against the Indianapolis Colts.

“This is a big moment for me personally because I love these guys, and I know my dad loved these guys and he will be so happy and proud that we were honoring them today,” Strunk said of her late father, Bud Adams, who founded the franchise in 1960.

The Titans say this will be the first time an NFL team has retired either a No. 9 or 27, giving the league 153 numbers that have been retired. McNair and George will join six other former Titans and Oilers whose numbers have been retired including Warren Moon, Earl Campbell, Mike Munchak, Bruce Matthews and Elvin Bethea — all members of the Pro Football Hall of Fame.

George called having his number retired a “huge honor” considering that usually requires being in the Pro Football Hall of Fame.

“I couldn’t imagine having a day like this where my jersey (is) retired by myself,” George said. “It has to be with Steve. … It’s totally appropriate to have us go in together.”

George, who played eight seasons with this team and made four Pro Bowls, remains both the franchise’s all-time leading rusher with 10,009 yards and all-time scrimmage yards leader with 12,153. McNair, drafted a year before in 1995 at No. 3 overall, played 11 of 13 seasons here and remains the franchise’s second all-time leading passer (27,141 yards) behind only Pro Football Hall of Fame quarterback Warren Moon (33,685).

McNair, killed July 4, 2009, leads the franchise with 76 wins as a starter. McNair and George together went 80-48 for a .625 winning percentage with only one losing season at 7-9 in 2001 and the 2000 Super Bowl, two AFC championship games, four playoff appearances and two division titles.

“Steve would be truly honored to know that he was held in such high esteem by you,” Mechelle McNair wrote. “Retiring his jersey is a really big deal for us. It is a tangible reminder for me and the boys to know that No. 9 will forever be held in the highest regard in the Titans nation.”

McNair remains one of only three quarterbacks in NFL history to throw for 30,000 yards and run for 3,500 yards with Fran Tarkenton and Steve Young. McNair earned three of his four Pro Bowls with the Titans and shared The Associated Press’ NFL MVP with Peyton Manning in 2003 as the first black quarterback to win that award.

George, who won the Heisman Trophy while at Ohio State, called a wild-card playoff victory over Baltimore in January 2004 as his favorite personal memory. Asked for a favorite game moment for McNair, George said when the quarterback was named MVP. George recalled all that McNair went through with injuries, thoughts of retiring to dramatic comebacks such as coming off the bench for a divisional win in Pittsburgh in 2000.

The Titans cheered McNair for 10 minutes when then-coach Jeff Fisher announced McNair had been voted MVP.

“We saw all he had to go through to get to that point as an African-American quarterback. He had to overcome a lot of stigmas and a lot of stereotypes to prove himself in this league,” George said.

“So it goes beyond just the numbers, it goes beyond just what you see on the stat sheet. To see him in the locker room getting taped up and having to take naps because he was tired and beat up and have to get up the next day and go out and fight, that was our culture. That’s who we were.”

Coach Mike Vrabel congratulated both George and McNair, noting he was lucky enough to have George as a teammate at Ohio State. Vrabel recalled hitting McNair in a playoff game hoping the quarterback fell like he did.

“We had some great matchups against the Titans,” Vrabel said. “Those two guys were a huge part of their success here, so we’re very well aware of what they’ve done here for the Titans. Just would like to say congratulations to them.”