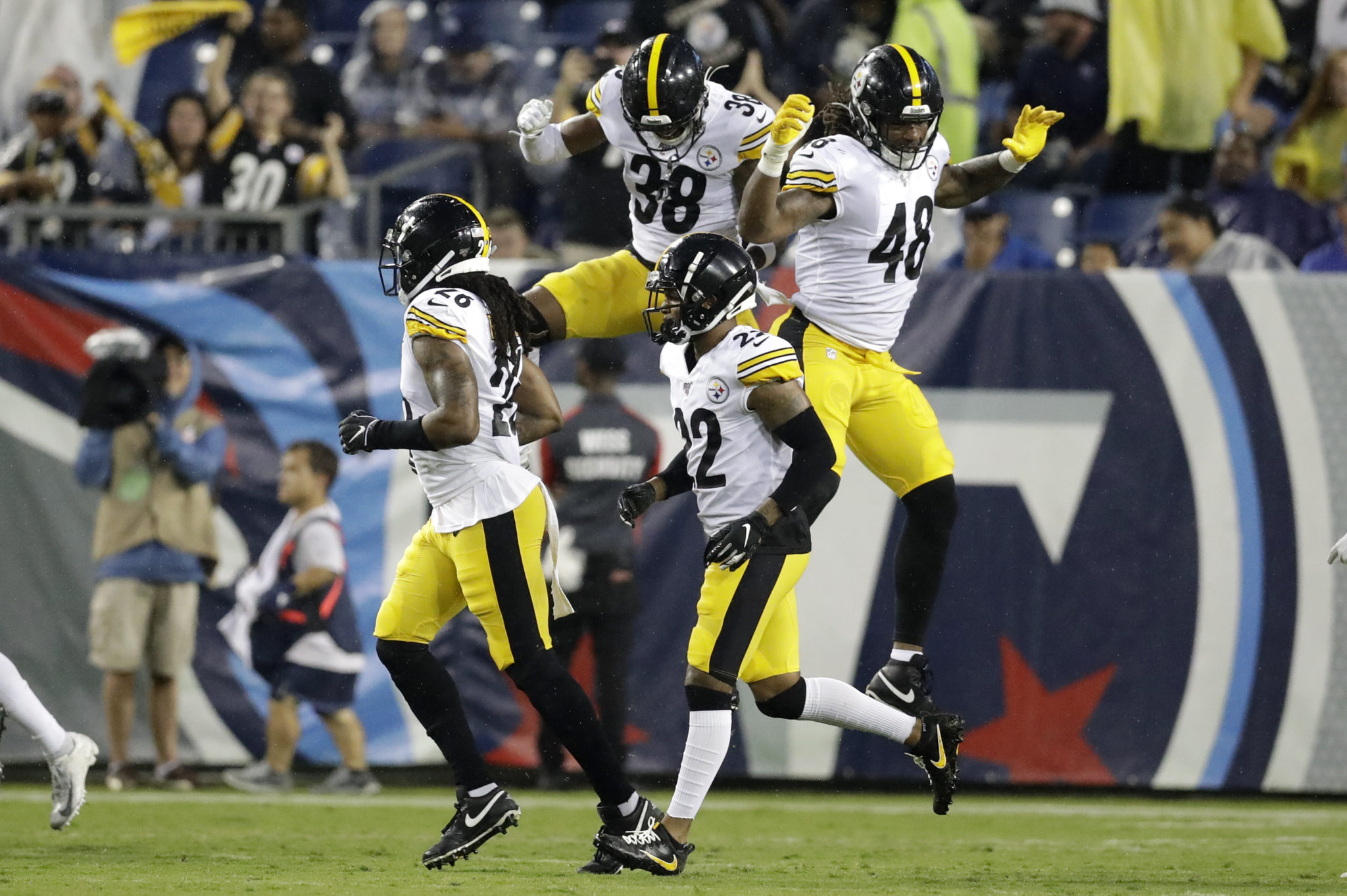 NASHVILLE, Tenn. — Ben Roethlisberger needed three short series to show he’s ready for the regular season. The Tennessee Titans did their best to protect Marcus Mariota on a wet and ugly night

Roethlisberger capped his night with a 17-yard touchdown pass to JuJu Smith-Schuster, and the Pittsburgh Steelers beat the Titans 18-6 Sunday night to remain perfect this preseason.

The Steelers (3-0) came up with four of seven sacks by halftime and had a turnover as they pummeled all three quarterbacks for the Titans (1-2).

Roethlisberger made his preseason debut and was a bit rusty with two short series. After Stephon Tuitt sacked Mariota in the end zone for a safety, Roethlisberger drove the Steelers 48 yards after the free kick and finished with the TD pass to Smith-Schuster.

He nearly gave the Steelers a 10-0 lead but Jaylen Samuels fell down after catching the pass on a 2-point conversion attempt. Roethlisberger spent the rest of the night watching and was 8 of 13 for 63 yards passing.


A night after Andrew Luck retired, the Titans played safe with their starting quarterback and pulled Mariota after he was sacked for the safety on his second series. Mariota was 0 of 3, including an uncharacteristic drop by veteran Adam Humphries. That proved a smart move with backup Ryan Tannehill sacked on his third play.

Pittsburgh is still trying to figure out Roethlisberger’s backup, and Mason Rudolph helped himself with a 41-yard TD pass to James Washington on his first throw of the game. That put the Steelers up 15-0 after the first quarter with a 159-25 edge in total offense. Rudolph finished the first half and was 6 of 9 for 75 yards.

Joshua Dobbs took over in the third quarter and didn’t get much help. One receiver was out of bounds after pushing off for offensive pass interference, and the Steelers needed review to show Trey Griffey did have control and both feet down on a catch after Dobbs scrambled to find him for a 23-yard catch. That set up a 31-yard field goal by rookie Matthew Wright.

The Titans intercepted both Rudolph and Dobbs, who was 4 of 7 for 79 yards.

Tuitt not only got a sack and the ball back for the Steelers, the veteran going into his sixth season had two in the first quarter taking both of the Titans’ top two quarterbacks down. Tuitt smothered Mariota in the end zone for the safety, then got to Tannehill on the third play of his first series. Tuitt is coming off a career-high 5 ½ sacks last season.

The best part of the game for Tennessee was veteran Brett Kern’s punting with a 70-yarder along with kicker Ryan Succop’s preseason debut. Succop had offseason knee surgery and wasn’t cleared from the physically unable to perform list until Monday. He kicked a pair of field goals for the Titans’ only points.