Jimmy Garoppolo: ‘It’s the first step of getting back into it’ 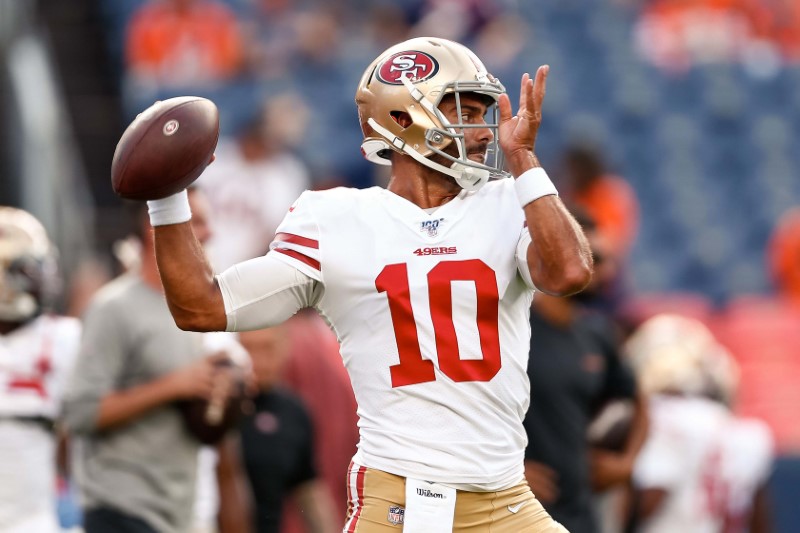 Zero yards, 0.0 passer rating and one first step to forget.

That was Jimmy Garoppolo’s return for the San Francisco 49ers in Monday’s preseason game against the Denver Broncos, his comeback from a torn ACL.

Garoppolo was pulled after three series with one completion in six attempts for no gain, and coach Kyle Shanahan said the plan was definitely to get him more work.

“Obviously a little frustrated, but it’s the NFL,” Garoppolo said. “Unfortunately, we don’t get to play the whole game right now so I only get so many plays. You wish you could be out there for more so we could bounce back. But it is what it is. It’s preseason right now, so we just have to take it in stride.”

C.J. Beathard spelled Garoppolo, but Shanahan said he expects to see his first-team offense for at least a few quarters against the Kansas City Chiefs on Saturday.


“He’s had a year off football, and before that he only played about eight games total,” Shanahan said of Garoppolo. “The more he can play, the better. I wish we could have kept him out there longer today but you risk everyone else too, so I had to get those guys out of there.”

Acquired by the 49ers from the New England Patriots in 2017, San Francisco bet the farm on Garoppolo with a five-year contract worth $137 million. Garoppolo tore his ACL in Week 3 last season and is still working his way back.

“Anxious to get out there and everything but nothing too crazy,” Garoppolo, 27, said. “It’s something I haven’t done in a year obviously, so got to knock the rust off and everything and thankfully we have a short week this week so we can bounce back quickly but it’s the first step of getting back into it.”