Has any player ever gotten one of the best contracts in the league after finishing his second and third seasons on injured reserve? 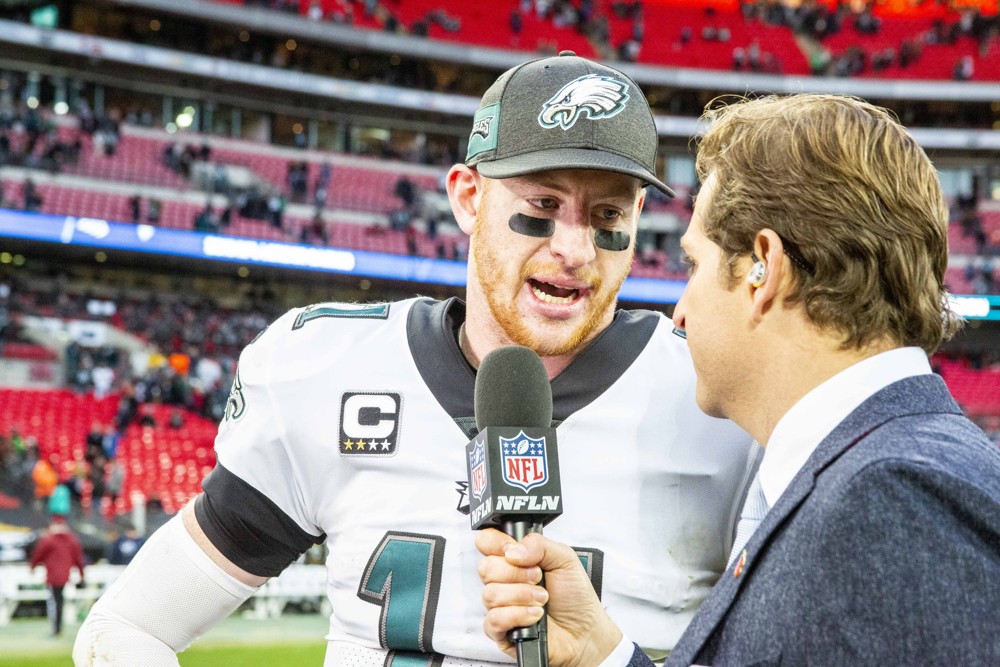 The early bird gets the market quarterback deal.

That is the best way to describe the four-year extension the Philadelphia Eagles gave Carson Wentz to lock him up until 2024.

The deal itself – a four-year $128 million contract with $107 million in guaranteed money – did not break new ground. It was a market deal for top quarterbacks that is likely to be surpassed in the next couple of years.

Russell Wilson got the same amount of guaranteed money in a $140 million deal and is currently No. 1.

But what was interesting about the deal is that the Eagles already had him under their control for two more seasons.

They could have waited a year or even two to extend him, but that likely would have meant the price would’ve gone up. The salary cap keeps rising every year and it spawns more and more mega deals for quarterbacks.

The team decided it was in their best interests to extend him now rather than later.

And Wentz had an off the charts season last year, which certainly gave him more leverage.

According to Warren Sharp, who tracks these things, Wentz is coming off the best third season in NFL history. He is the top rated third-year quarterback with 400 minimum attempts and best in completion percentage at 69.5

But there is one caveat. He was injured and didn’t finish the season for the second year in a row. Wentz suffered a broken bone in his back last year and a torn ACL in 2017.

Has any player ever gotten one of the best contracts in the league after finishing his second and third seasons on injured reserve?

Times are changing, but it is certainly unusual.

The Eagles are betting he is going to stay healthy and take them to the Super Bowl. The good news for the team is that Wentz has shown no signs of being slowed by the injuries in the offseason.

And players are usually better their second year coming off an ACL injury.

The flip side of his good stats last year is the fact they were 5-6 in the 11 games he started, and Nick Foles came in after he was sidelined and led the Eagles to victories in the last three games, taking them to the playoffs.

The previous season Wentz was 11-2 when he was injured and Foles took them to the Super Bowl.

Foles is now with the Jaguars.

The bottom line is that Wentz has yet to appear in a playoff game, much less win one.

And Wentz does have some baggage. There was a report last year in Philadelphia that he alienated some teammates and was described as “selfish” and “uncompromising.”

Wentz virtually confirmed the story and suggested he has evolved.

He said it hasn’t been the easiest time for him after getting hurt each of the last two years.

“So, I realize I wasn’t maybe the greatest teammate at times because I was emotionally all over the place,” he said of dealing with the injuries.

“To the outside world, I probably didn’t show it much. But internally, you definitely are fighting some sort of emotions… So, there’s a chance to learn just about how to handle myself in certain situations.”

“I know I am not perfect,” he said. “I know I have flaws. So, I’m not going to sit here and say it was inaccurate and completely made up. I’m not going to do that. But at the end of the day, I will say our locker room is really close.”
Wentz said he wishes that if the players had issues, they could have talked about them.

The Eagles are betting $107 million that this will all blow over.

The team released a video after he signed featuring the quarterback saying: “It’s going to be a fun ride.”

It will be fun only if he stays healthy and takes them deep in the playoffs. Anything less than that and there will be even more pressure on in 2020.