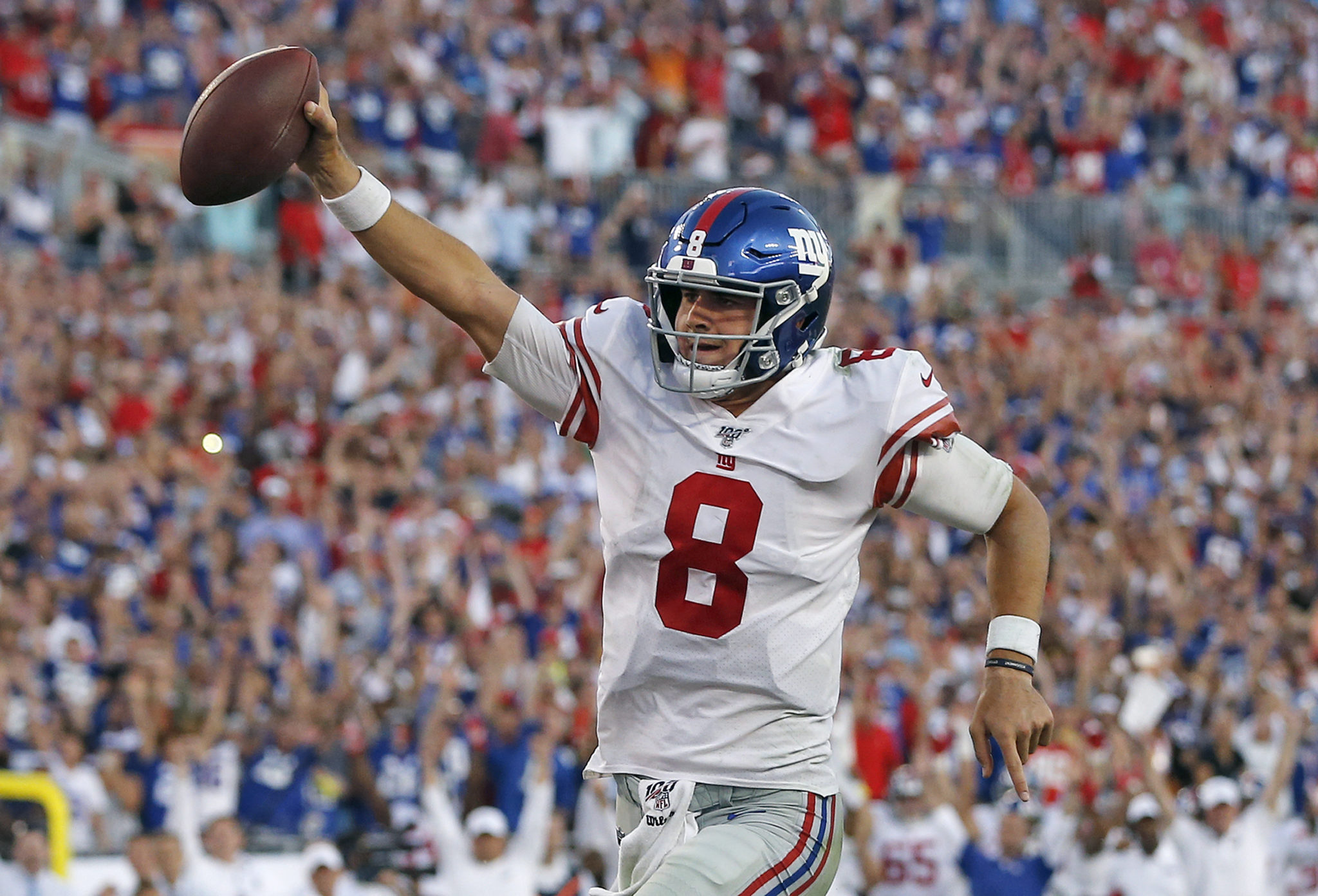 Daniel Jones passed another test in his starting debut for the New York Giants on Sunday, a comeback victory over the Tampa Bay Buccaneers.

Jones finished 23 of 36 for 336 passing yards and two touchdowns while rushing for a pair of scores, including the winner on fourth-and-5.

The win required the Bucs missing a 34-yard field goal, and Jones’ performance wasn’t as rosy as the numbers. But his mobility and toughness — traits that he showed in spades at Duke — provided encouraging signs.

Jones is no Kyler Murray, but he created often with his legs at Duke, both with speed and strength. That paid dividends immediately on Sunday.

On one second-quarter drive, Jones evaded Shaq Barrett for an 11-yard scramble on third-and-5 and pulled out of Barrett’s grasp, rolled left and hit Saquon Barkley for 19 yards on third-and-4. He also scurried in for a 7-yard touchdown on a zone-read.

His other 7-yard score won the game, as Jones waltzed up the middle with defenders’ backs turned in man coverage.

That ties directly to Jones’ best trait coming out of college: pocket toughness.

Manning is certainly tough enough to take hits, but he’s far less capable now. A critical checkpoint as aging quarterbacks decline is when they can’t make standard throws without a clean platform. Much like his brother Peyton near the end of his career, any flash of pressure or forced movement is enough to ruin Eli Manning’s platform, creating many spoiled plays.

Jones is tough and capable of throwing amid pressure. Despite five sacks and 11 knockdowns, he was unfazed, actively stepping into behemoths Vita Vea and Ndamukong Suh to throw at times. He occasionally seems oblivious to pressure, which sounds great … except …

Despite the toughness, Jones doesn’t always see or feel when pressure is closing in. His protection — especially left tackle Nate Solder — has been faulty, but he has six fumbles through the equivalent of about two full games.

Two came Sunday, and Jones narrowly avoided two others, including one overturned to an incompletion. The first fumble was most discouraging, when he pulled down a pump fake directly in the face of Barrett, making for an easy strip.

The rash of fumbles could be a small-sample outlier or speak to narrow vision. Jones missed a few opportunities to step up and avoid pressure Sunday, including on Barrett’s third sack.

More concerning was Jones’ poor vision and processing on third-and-15 in the second quarter. With time to scan, Jones started left and came back right, where Bennie Fowler ran a dig. With the Bucs in 2-man coverage — man with two high safeties — and Fowler the lone receiver to the right, his route was doubled immediately.

That was easily Jones’ worst play, but he had other shaky moments, including predetermined reads where he failed to see other receivers open and a near pick-six in the fourth quarter. That’s normal for a rookie, but Jones must learn to see the bigger picture.

Jones might want to send Edwards a gift basket this week. On top of the dropped pass, Edwards missed a tackle about 18 yards into Evan Engram’s 75-yard touchdown, then recklessly jumped the tight end’s short crosser to open Darius Slayton’s 46-yard grab. The latter two plays were great designs by Shurmur, but Edwards’ mistakes far worsened the damage.

Jones benefited greatly from Shurmur’s scheming, including rub routes against man coverage and shrewd designs against Cover-4, which the Bucs leaned on late. The rookie converted many chances but also missed one just before halftime when Shurmur used a Mills concept to get Russell Shepard free on a deep post.

At the same time, Jones was unlucky early in the fourth, as Barrett’s second strip-sack came while Jones was winding up for another Mills concept, this time to Fowler.

Jones wasn’t a star like the numbers depict, but he mostly executed well and made timely plays with his feet despite ample pressure. His ball placement wasn’t quite as sharp as in the preseason, as receivers bailed him out on a few nice catches, but he also had pinpoint throws, such as the 7-yard touchdown to Sterling Shepard.

Jones should make progress against Washington next week, but meetings with Minnesota and New England in Weeks 5 and 6 will be major tests for his vision and accuracy.

–The Giants’ defense has been a disaster, but stubbornness contributed just as much as a lack of talent on Sunday. New York watched Janoris Jenkins get torched by Mike Evans all day but still left the two on an island while trying to protect a one-point lead in the final minute. Jenkins had no chance on Evans’ 44-yard gain, which should have sent the Giants to 0-3.

–A year after the jet sweep proliferated, coaches continue to find new wrinkles. The Ravens have been the most creative, using jet motion to give fullback Patrick Ricard a head start as a lead blocker on counter or backside blocker on split zone, or to send Marquise Brown vertical after his motion across. The Raiders’ touchdown to J.J. Nelson on Sunday copied a Bengals’ Week 1 play with the jet-sweep-wheel flea-flicker. And the Rams broke out the jet-sweep reverse for 17 yards to set up their last touchdown on Sunday night.

–Cam Newton’s early struggles with accuracy amid his foot injury shrouded how well-designed Norv Turner’s offense has been. Kyle Allen isn’t Newton, but his ball placement Sunday accentuated another great plan from Turner. D.J. Moore’s 52-yard touchdown was a perfect example, with the “dagger” concept perfectly clearing out quarters coverage and freeing Moore on the dig, whom Allen hit in stride to maximize yards after catch.