NFL’s first decade was the 1920s, when teams came and went 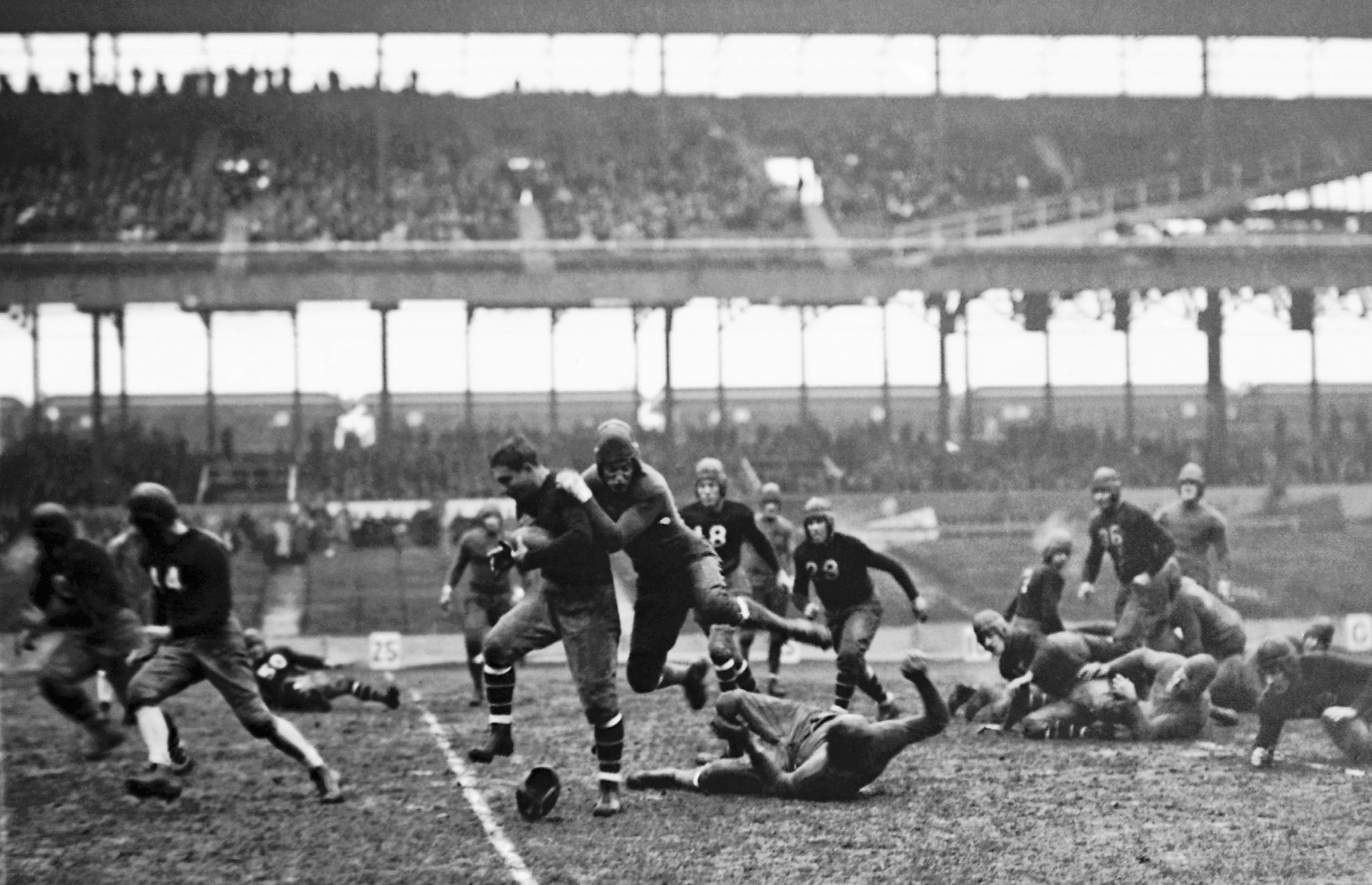 Throughout a decade of flux, many franchises came and went. Such colorful nicknames as the Toledo Maroons, Kansas City Blues and Frankford Yellow Jackets surfaced. By the end of the decade, the NFL had 12 clubs, with only the Triangles and Cardinals in their original locations.

The name was changed to National Football League in 1922.

TOP TEAMS: Akron was awarded the first championship after going 8-0-3; there were no playoffs and even some games against non-league competition. Indeed, there were no playoffs throughout the decade. So the titles from 1921-29 went to, in order, the Chicago Staleys; Canton for two straight years, then the Cleveland Bulldogs; the Cardinals; the Yellow Jackets; the Giants; the Providence Steam Rollers; and the Packers.

TOP PLAYERS: The “Galloping Ghost,” Red Grange, was America’s football icon, but from his years as a college star at Illinois. In 1925, after the Illini’s season concluded, he signed with the Bears and became the top attraction on the pro level. Grange starred in a barnstorming tour after that season, at one point playing eight games in 12 days. He also claimed he would have gotten more respect had he joined Al Capone’s mob than he did playing for the Bears. He was voted into the Hall of Fame in 1963’s original class.

Ernie Nevers, also a Hall of Fame original, joined the Duluth Eskimos in 1926 after the team was rescued from bankruptcy. He also was a barnstorming attraction, saying the Eskimos played in 29 games from coast to coast with 16 players. Nevers scored all 40 points while playing for the Cardinals in a victory over the Bears in 1929.

Paddy Driscoll, a triple-threat halfback who also played defense, punted and drop-kicked for the Cardinals — and later for the Bears when the Cards couldn’t afford him any longer — once scored 27 points in a 1923 game. He entered the Pro Football Hall of Fame in 1965.

TOP COACHES: George Halas, one of the founders of the NFL and, by far, its longest-tenured coach, didn’t win a championship in Chicago, but did lead the Staleys to the 1921 title in Decatur, Illinois; the franchise moved the next year.

Curly Lambeau had title success in the decade as the Packers’ boss, winning in 1929 (the first of three consecutive championships). Like Halas, Lambeau was part of the initial Hall of Fame class in 1963.

MEMORABLE GAMES: Grange’s debut with the Bears came on Thanksgiving Day against the local rival Cardinals. A crowd of 36,000, at the time the largest official gathering for a pro football game, showed up at Cubs Park, not yet known as Wrigley Field. Although the game ended up 0-0 and Grange rushed for a mere 36 yards just a few days after leaving Illinois, he also had an interception and several good punt returns.

Driscoll, who briefly played baseball for the Cubs, scored his 27 points on four touchdowns and kicked three extra points in a 60-0 victory over the Rochester Jeffersons, a club that lasted only four games in ’23 before disappearing from the schedule. They returned, but folded in 1925.

GAME CHANGERS: The biggest innovation in the earliest pro football decade was, well, money. Bidding wars were common for the college stars such as Grange. There also was a 1929 night game, the first in the NFL, when Providence used floodlights when it hosted the Chicago Cardinals.

In 1921, Fritz Pollard became the first African-American head coach in the league. In the modern era, the first was Art Shell in 1989.

FUN FACT: When 15 men gathered at Ralph Hay’s card showroom in Canton, Ohio, to launch the 10 charter teams of the National Football League in 1920, there weren’t enough chairs for everyone. A few of the future owners of NFL franchises instead sat on the running boards of the modest Hupmobile in Hay’s dealership. And when they were ready to sign the papers to establish the league, they leaned on the hood of the car to finish up.