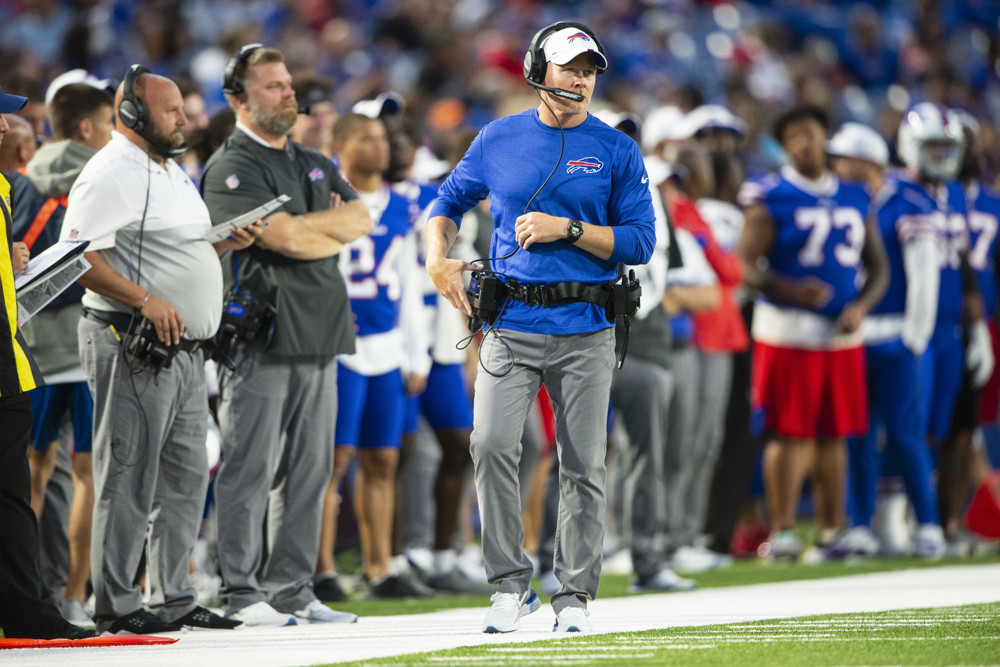 The only clash of 3-0 teams this week will be Sunday in Orchard Park, N.Y., where the Buffalo Bills hope to build on a rare hot start against the nemesis New England Patriots.

With two terrific defenses facing off, the Bills’ unit must have one of its best days for the 7-point home underdogs to pull the upset.

1. Can McDermott slow down Brady?

Tom Brady is 30-3 against the Bills in his career, and he still looks spry at age 42. But Sean McDermott’s unheralded defense actually matches up reasonably well.

Slot cornerback Taron Johnson and safeties Jordan Poyer and Micah Hyde are equally versatile, allowing McDermott to involve them as blitzers or change up their zones to muddy the quarterback’s read.

Banged up with a first-year starter at center, the Patriots’ O-line has been prone to breakdowns. It’s not hard to imagine McDermott’s scheme creating problems.

Even so, the Patriots will hit some chunk plays. Edmunds still plays like an overeager puppy at times, making him susceptible to Josh McDaniels’ hard play-action with a pulling guard. Likewise, New England could exploit rookie defensive tackle Ed Oliver’s aggressiveness with trap/wham run schemes.

2. Belichick ready to feast on Allen

Up front, Bill Belichick’s defensive approach could look quite similar to McDermott’s. With a host of linebackers comfortable off the ball, on the edge or rushing inside, Belichick manufactures pressure with six- or seven-man fronts that rush four or five via stunts.

That’s perfect against the Bills, whose restructured offensive line — platooning at right tackle until injury moved rookie Cody Ford to right guard last week — has been much better run-blocking than pass-protecting thus far. Stunts and blitzes have broken down protections quite often.


Even flashes of pressure are an issue, because Josh Allen remains largely a one- or two-read quarterback whose “escape” instinct runs far too hot. Even in coordinator Brian Daboll’s shrewd designs, he often leaves open receivers untargeted, and he flees at the first hint of pressure. Worse, Allen scrambles far more to run than to pass, always pressing forward (not prepared to throw) and often not even looking downfield.

Where Belichick differs from McDermott is that he prefers man coverage. Allen’s legs could encourage Belichick to play less man, but he didn’t last December, when the Patriots dominated the Bills’ receivers one-on-one and used spies and disciplined rushes to contain Allen. New England’s secondary has only improved since, though Buffalo’s weapons have, too.

Even if “Good Josh” shows up for most of Sunday’s game, it’s hard to imagine Allen staying turnover-free.

3. Will Patricia follow his old boss’ blueprint vs. Chiefs?

Speaking of Belichick, his plan against Patrick Mahomes was perhaps the best any team has tried yet, slowing the Chiefs’ offense for much of January’s playoff meeting.

The plan was pretty straightforward: A dedicated double-team to Tyreek Hill with everyone else in Cover-0 (man-to-man with no safety help), and four- and five-man rushes with a litany of stunts and blitzes, much as discussed above. Hill, of course, remains out, but Patricia could still follow his former boss’ approach.

The Lions’ personnel isn’t on the Patriots’ level, but top cornerback Darius Slay — assuming he’s healthy — could play Sammy Watkins to a draw. That would leave underrated cover man Rashaan Melvin (also banged-up) on whichever speedster — Mecole Hardman or Demarcus Robinson — lines up outside, and Justin Coleman in the slot.


Up front, Trey Flowers and Da’Shawn Hand — who appears set for his 2019 debut — would pair with linebackers Jarrad Davis and Devon Kennard in stunts and twists against a line that could be missing left tackle Eric Fisher.

Ultimately, Detroit’s defense probably can’t hang with Mahomes, but simply limiting him early would be a huge coup. The Chiefs have jumped on teams with pass-heavy attacks early, scoring 74 points by halftime while passing 75 percent of the time (72 pass plays to 24 runs). Knowing this, Patricia could gamble and sell out to rush Mahomes, even on early downs.

4. Nagy still has to hide Trubisky

The film shows the same issues he has displayed throughout his career, flaws that weren’t exploited by the Redskins’ struggling defense.

Much like Josh Allen, Trubisky is mostly a one- or two-read quarterback who falls back on his legs. His poor field vision has led Matt Nagy to further structure his offense, presenting a ton of defined reads and quick throws underneath. Because Nagy is an excellent designer, many of these work, but Trubisky still misses some, both with vision and with inaccuracy stemming from mechanics, including the tendency to lock his front leg while throwing.

There’s no reason to think these issues are going away soon. That leaves Nagy clawing for ways to out-scheme Mike Zimmer and the Minnesota Vikings’ defense on Sunday, knowing that even some of his best designs could be undermined by his quarterback.

Across one meeting in 2017 and two last year, Garrett has 1.5 sacks and an additional QB hit vs. the Ravens. But Garrett has managed just one sack or hit vs. Stanley, and only when Stanley didn’t get the snap count and was way late off the ball.

In his fourth season, Stanley is blossoming into a star, with a reasonable case that he’s outplaying draft classmate Laremy Tunsil, a great left tackle in his own right. Stanley has been a major contributor to Lamar Jackson’s early success, including pitching a shutout — no hits, no QB hits — against Arizona’s Chandler Jones in Week 2.

Garrett is still refining some of his moves and has drawn a few roughing-the-passer penalties, but he’s more than delivered on the freakish traits that made him the top overall pick. This should be a great biannual battle for years to come.