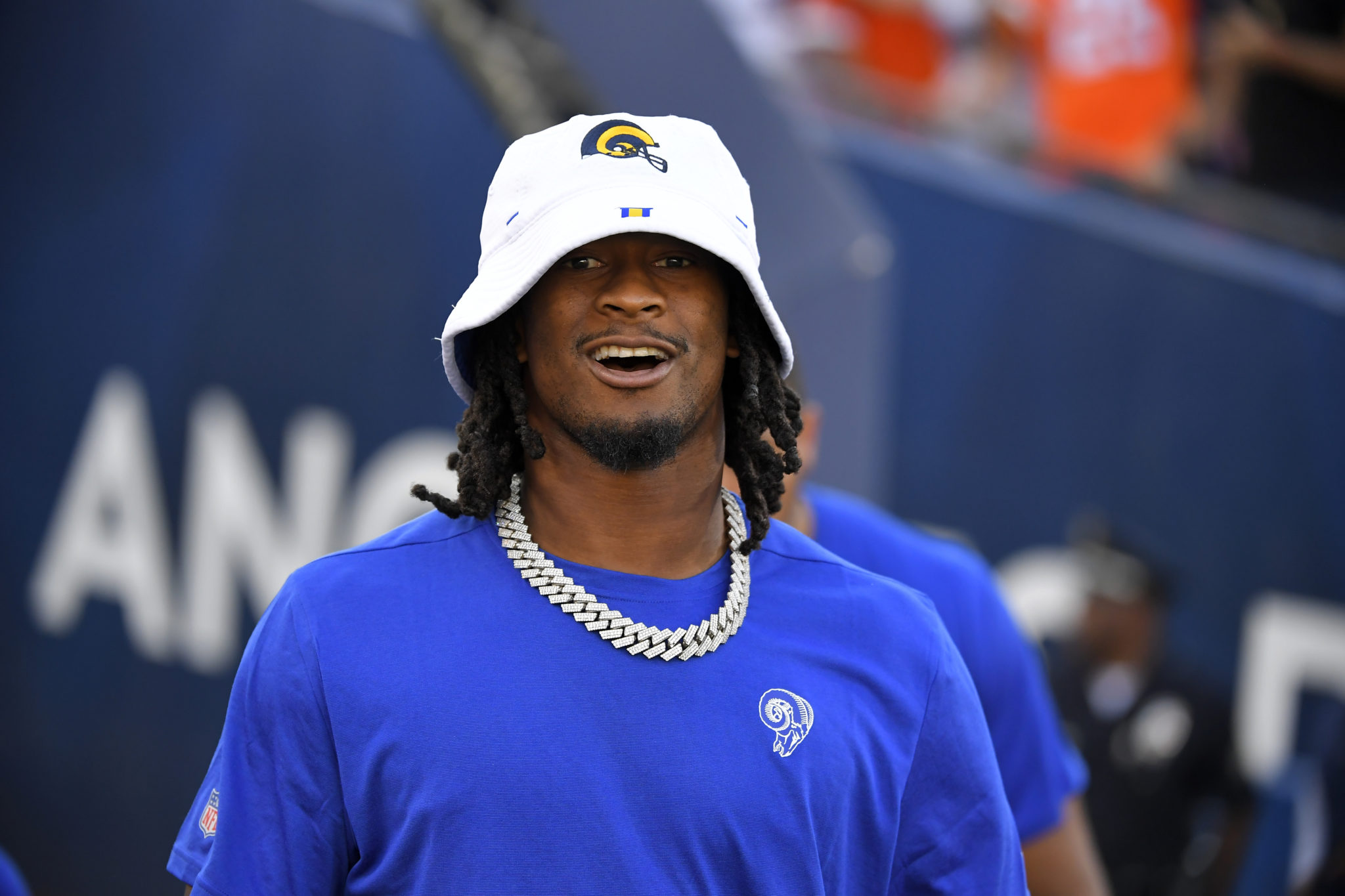 THOUSAND OAKS, Calif. — After an offseason of speculation about the health of Todd Gurley’s left knee, it would be reasonable to think the Los Angeles Rams’ running back would be ready to put those questions to rest.

But Gurley does not seem to be interested in answering the query at all, saying his knee is “fine” and refusing to elaborate any further.

Despite how Gurley feels about all the focus on his knee, his performance at Carolina this week could address one of the main unknowns about how the Rams will fare following their loss to New England in the Super Bowl.


It was Gurley’s performance in the playoffs, culminating when he had 10 carries for 35 yards against the Patriots, that put his surgically-repaired left knee front and center once again. The attention was compounded when the Rams drafted another runner, Memphis standout Darrell Henderson, in the third round. Then Gurley’s workload was carefully monitored during organized team activities and training camp. Finally, coach Sean McVay held Gurley and nearly all of the Rams starters out of preseason games, adding to the mystery about how Gurley will perform after rushing for 30 combined touchdowns the past two seasons.

While Gurley has largely refused to get into specifics about his knee for months, his teammates insist he has performed well in practice and they have no doubt about how the star rusher will play when he starts his fifth NFL season.

“He looks explosive,” defensive tackle Aaron Donald said. “He still looks fast. He looks ready. From what I see and just watching him, he looks ready. But you got to ask him if he ready. I’m pretty sure he’s going to tell you he is, so he’s ready.”

McVay did his part by saying there will be no restrictions on Gurley’s workload against the Panthers, providing another optimistic sign after his struggles late last season.


Gurley averaged 3.3 yards per carry in losses to Chicago and Philadelphia before being held out of the Rams’ final two regular-season games because of his knee. After bouncing back with 115 yards rushing and one touchdown on 16 carries against Dallas in the divisional round to open the playoffs, Gurley had just four carries for 10 yards against New Orleans before turning in another quiet performance against the Patriots.

That five-game sample stood in stark contrast to how Gurley had been the catalyst of McVay’s offense to start the wunderkind’s tenure with the Rams. Gurley had been at the center of McVay’s high-scoring scheme by delivering explosive plays and touchdowns as a runner and receiver, while his status as workhorse opened up the play-action pass for quarterback Jared Goff or allowed Los Angeles to close out close games.

However, even with the drop in production and the constant drumbeat of questions about how Gurley will perform moving forward, McVay has delivered a similar refrain to that of his running back when it comes to talking about that knee.

“I think there is a curiosity of, an excitement and anticipation on just getting a chance to play real football and kind of roll it out there and see how we look,” McVay said when asked if he was curious about how Gurley would play. “I think the guys are excited. But I’m excited to see Todd Gurley continue to do his thing. And he looks good, he’s feeling good, and we’re looking forward to Sunday.”

And no one might be more relieved to play a game than Gurley, if only to stop the questions.

NOTES: LT Andrew Whitworth was the only player listed on the Rams’ injury report after not participating in practice Thursday, but his absence was listed as “not injury related.” McVay has frequently held Whitworth out of practice early in the week as a precaution during his first two seasons with the Rams.