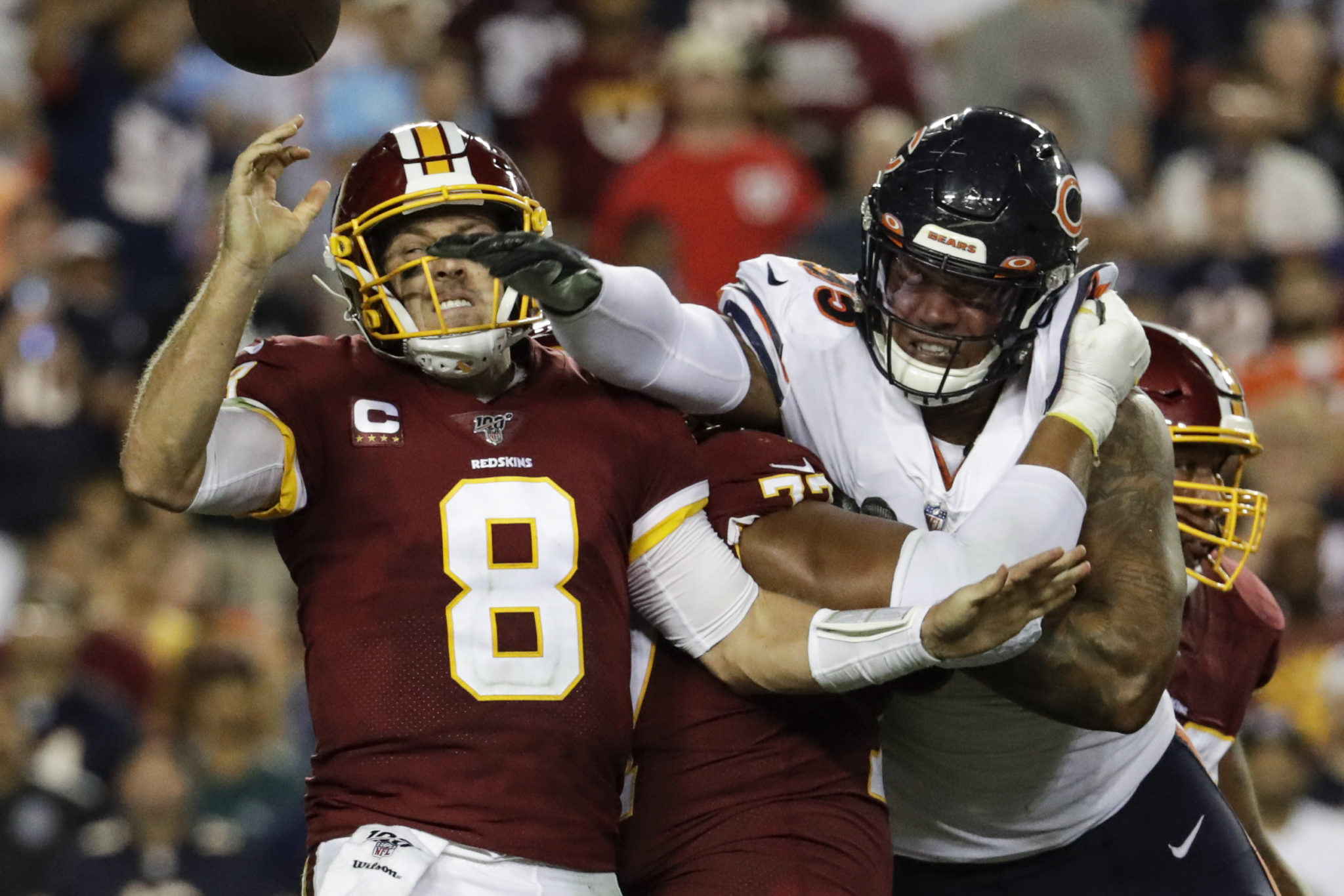 Chants of “Let’s go, Haskins!” filled the air after the third of five turnovers for Washington Redskins quarterback Case Keenum.

Later, boos were the chorus of choice as Redskins players, coach Jay Gruden, defensive coordinator Greg Manusky and others headed to the locker room at halftime after a field goal cut the hosts’ 28-point deficit to 25 against the Chicago Bears on Monday night.

With a defense that managed to make Mitchell Trubisky, a guy who entered Week 3 without a single TD pass, look like a bona fide star for a quarter, and an offense that kept giving the ball away, the Redskins lost 31-15 to the Bears, potentially raising all sorts of questions about whose jobs might be on the line in winless Washington.

Could Keenum, who threw three interceptions and lost two fumbles, be benched in favor of first-round draft pick Dwayne Haskins before Washington travels to face the New York Giants and their rookie starting quarterback, Daniel Jones? Or be replaced, instead, by veteran Colt McCoy, who’s nothing more than a journeyman and has been sidelined by injury but seems to be Gruden’s guy?

“The most important thing is we have to have some continuity,” Gruden said. “I can’t be changing people every five minutes here.”


Could Manusky, who was thought to be on his way out during the offseason, be fired as the scapegoat for a defense that has put up little resistance so far?

“You can blame the offense all you want. Defense has let the team down and we’ve got to step it up,” defensive lineman Jonathan Allen said.

Could Gruden be gone before the end of his sixth season? His record stands at 35-47-1, with only one nine-win season so far one one-and-done playoff appearance.

Could Bruce Allen, hired a decade ago as owner Dan Snyder’s right-hand man, be on his way out after little on-field success worth bragging about?

Nothing like a mostly disastrous performance on national television against a so-so opponent — Chicago entered at 1-1 — to raise these sorts of questions.

Washington’s first possession was quite a display of disarray: Adrian Peterson ran for no gain; then there were offsetting penalties; then a pass dropped by tight end Jeremy Sprinkle; and then Keenum threw a pick-6 to safety Ha Ha Clinton-Dix, who played for the Redskins last season and finished Monday’s win with two interceptions.

The second quarter included two turnovers by Keenum, who hadn’t thrown a pick this season until Monday, and three TD tosses from Trubisky to Taylor Gabriel — of 1, 3 and 36 yards.

With Trubisky reverting to form, and Chicago playing a softer defense, the Redskins (0-3) made things more interesting in the second half, getting within 28-15.

But after getting to Chicago’s 25 via passes, Washington ran four times in a row, the last a fumble by Keenum as he tried to leap over the pile on fourth-and-1 at the 16 with about 7 minutes left.

“At the end of the day, you’re going to have people that are going to talk on the outside” about changes being made, linebacker Jon Bostin said, “but on the inside, we understand that and it comes down to us doing our job.”