Baker gets benched, 49ers stay perfect in 31-3 win over Browns 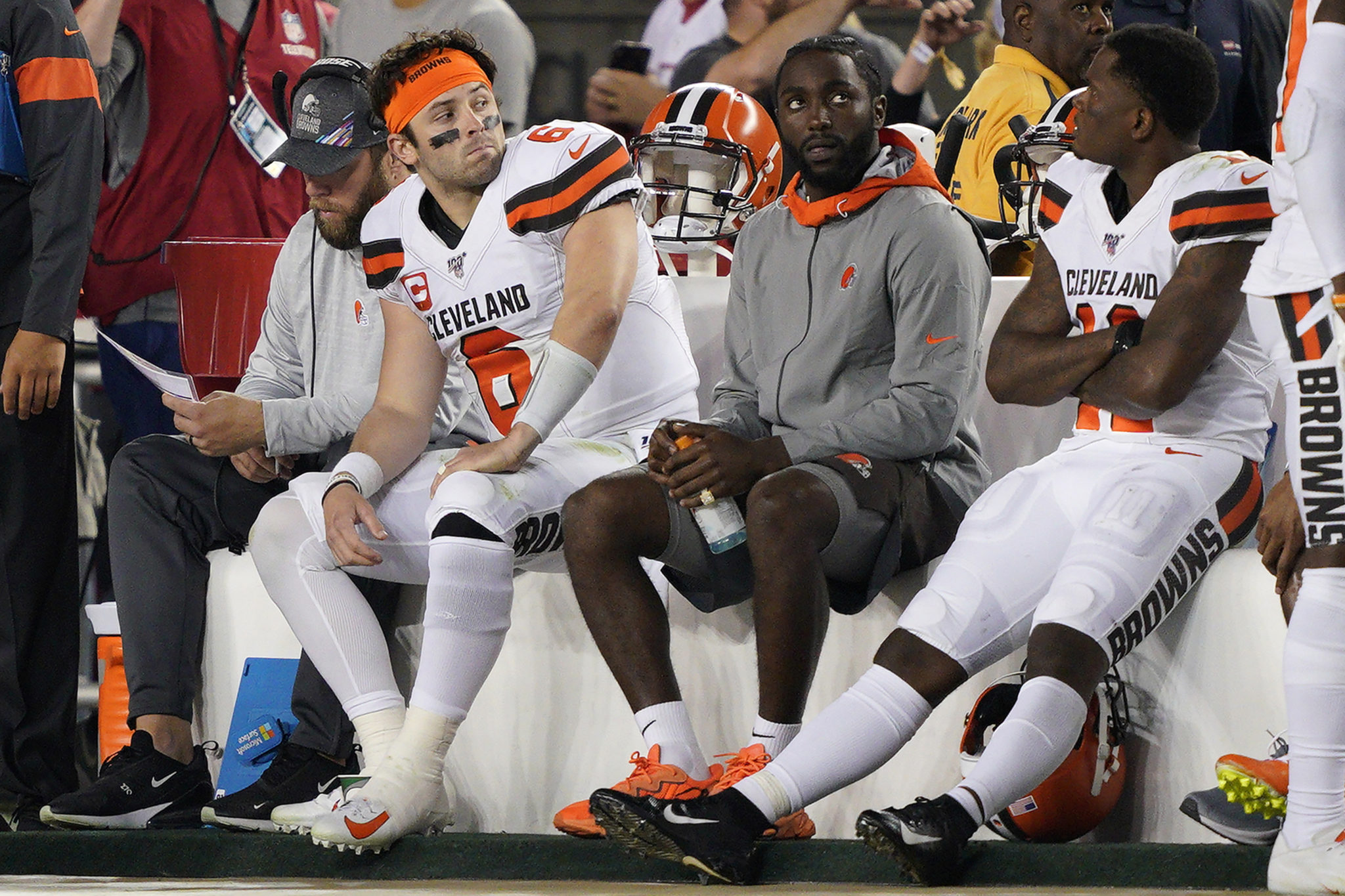 Matt Breida ran 83 yards for a touchdown on San Francisco’s first play from scrimmage, Baker Mayfield was harassed into his worst game as a pro, and the 49ers stayed unbeaten for their best start in nearly 30 years, beating the Cleveland Browns 31-3 on Monday night.

Tevin Coleman added a 19-yard score as part of a dominant ground game on a day when quarterback Jimmy Garoppolo passed for 181 yards and kicker Robbie Gould missed a pair of field goal attempts and had a third try blocked.

San Francisco (4-0) joined the 5-0 New England Patriots as the only remaining undefeated teams in the NFL. It’s the first time the 49ers have won their first four games since 1990.

The Browns (2-3) are headed the opposite direction after losing two of three, with fresh concerns about their young quarterback.


Mayfield had a horrible game. The No. 1 overall pick last year, Mayfiaeld completed 8 of 22 passes for a career-low 100 yards, had a 13.4 passer rating, threw two interceptions, fumbled twice and was sacked four times before being pulled in the fourth quarter.

It’s the first time in Mayfield’s 18 career starts that he failed to throw a touchdown pass.

Things were rough all around for Mayfield.

San Francisco defensive end Nick Bosa poked fun at the Browns quarterback after forcing Mayfield into a hurried incompletion in the second quarter. Bosa, the second overall draft pick, got up and pretended to wave a flag and plant it in the turf as the crowd roared. It was a clear shot at Mayfield, who planted an Oklahoma flag in the turf after leading the Sooners to win over Bosa and Ohio State in 2017.

The 49ers were coming off a bye and had two weeks to prepare, while the Browns flew cross country.

Breida raced past the Browns front line and went untouched on his long touchdown run, waving to safety Demarious Randall as he sprinted into the end zone with the 49ers longest run of the season.

Fans at Levi’s Stadium barely settled back into their seats when Richard Sherman picked off Mayfield near midfield, setting a rough tone for Cleveland’s second-year quarterback.


Breida and Coleman combined for 211 rushing yards as San Francisco outgained Cleveland 275-102 on the ground.

That took pressure off Garoppolo, who passed for two touchdowns and completed 20 of 29 throws.

Garoppolo’s 5-yard throw to Breida put the 49ers up 14-0 early in the first quarter. He later connected on a 22-yard pass to tight end George Kittle in the third that made it 28-3.

NOT THIS TIME EITHER

The 49ers defense is the only NFL team to not allow a rushing touchdown this season. Browns running back Nick Chubb had 87 yards on 16 carries but was a non-factor for most of the game, especially after Cleveland fell behind big.

Browns wide receiver Odell Beckham Jr. threw a 20-yard completion to Jarvis Landry on Cleveland’s first play. Beckham took a handoff from Mayfield for what initially looked like an end around before reversing direction then pulling up to pass. It’s the third time in his career that Beckham has completed a pass, but the first time this season.

49ers: Fullback Kyle Juszczyk left the game with a possible left knee injury midway through the third quarter. Juszczyk, who had a pivotal block on Breida’s long touchdown run, was taken to the medical tent and was later carted into the locker room.

Browns: Return to Cleveland to host Seattle on Sunday before getting a week off for the bye.

49ers: Play at the Los Angeles Rams on Sunday in a key divisional matchup for both teams.