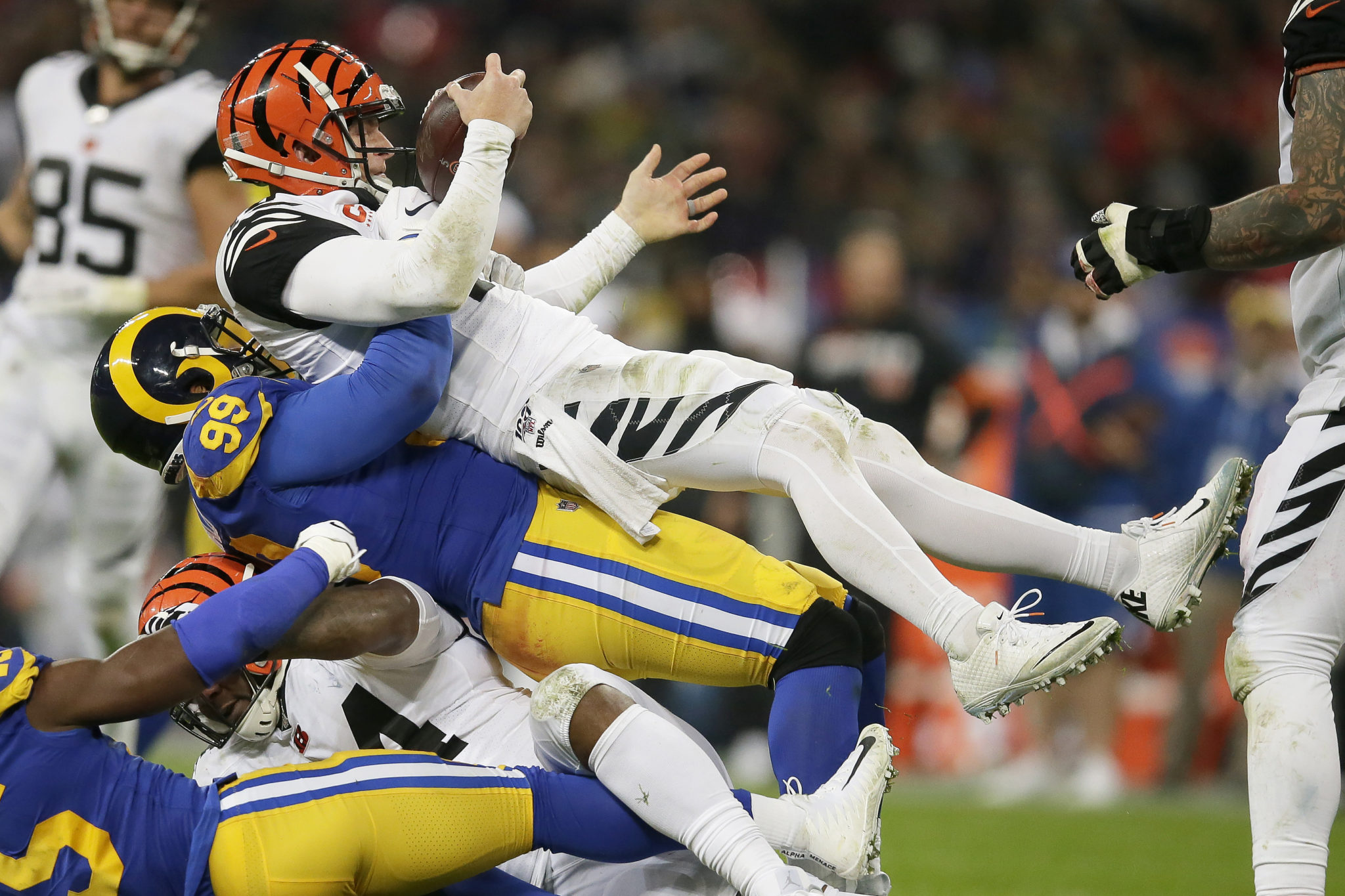 With no wins at the season’s midpoint, the Bengals figured it was time to end Andy Dalton’s tenure and see if rookie Ryan Finley is their quarterback of the future.

Coach Zac Taylor decided Tuesday to bench Dalton, ending his nine-season run as a starter. The move came two days after a 24-10 loss to the Rams in London left Cincinnati 0-8 for the first time in 11 years .

The first-year coach decided to use the bye week to get Finley — a fourth-round pick from North Carolina State — ready to face the Baltimore Ravens on Nov. 10 at Paul Brown Stadium. It’s less a referendum on Dalton than an indication that the franchise is looking long term now that the season has slipped away.

Finley looked good in preseason with backups but hasn’t taken a snap in the regular season.

“We need to see what Ryan Finley can do, what he can provide for us,” Taylor said. “Until you see him live against starters, you really don’t know what you’ve got.”


They know what they’ve got in Dalton, who has one more year left on his contract. He led the AFC in passer rating in 2015, the most recent time Cincinnati reached the playoffs, but has struggled in the past few years as the offensive line deteriorated and top receiver A.J. Green missed a lot of time with injuries.

Dalton led the Bengals to a club-record five straight playoff appearances from 2011-15 but couldn’t get that elusive postseason win.

“It’s not an easy decision when a guy’s given it his all for nine years,” Taylor said. “He certainly deserves better. You wanted to win games with him.”

Dalton, who turned 32 on Tuesday, wasn’t available for interviews. Finley declined to talk to reporters until after a practice on Wednesday.

Dalton and Green have been the faces of the franchise since the Bengals acquired them with their first two picks in 2011. Each of them missed one of the playoff losses because of injuries. Green has missed all eight games this season while recovering from an ankle injury during the first practice of camp.

Players weren’t shocked by the move, given the team’s 0-8 status.

“They started the season off with a change,” defensive end Carlos Dunlap said. “We’ve got a new head coach and a whole new staff, and the new staff wants their guys in there.”

In many ways, it’s been Dalton’s most challenging season .

The offensive line has been in flux and hasn’t been able to protect Dalton or open holes for the running game, which ranks last in the league with only 59.5 yards per game. During a loss to the Jaguars, Dalton ran for all of the Bengals’ 33 yards. He has all three of their rushing touchdowns this season.

The lack of a running game has allowed opponents to go after Dalton, who has been sacked 29 times, third-most in the league.

Bengals players have watched other lowly teams trade away top players to contenders. The Bengals chose not to trade Green, who is in the final year of his deal, or any other veterans before Tuesday’s deadline.

Instead, they benched their starting quarterback.

“It’s tough when you hear your best player is (possibly) getting traded or things like this happen because that’s the people you want to build the team around,” receiver Tyler Boyd said. “That’s the guy, that’s our team — guys that can change a game.”

Taylor considered the quarterback change until after the loss in London, which assured the Bengals of a fourth straight season without a winning record. The bye week gives Finley additional time to get ready for the Ravens, who beat the Bengals in Baltimore 23-17 on Oct. 13.

“We need to see a rookie — it takes more than one game to figure out what we’ve got there,” Taylor said. “So we’re going to give him a chance to prove that.”