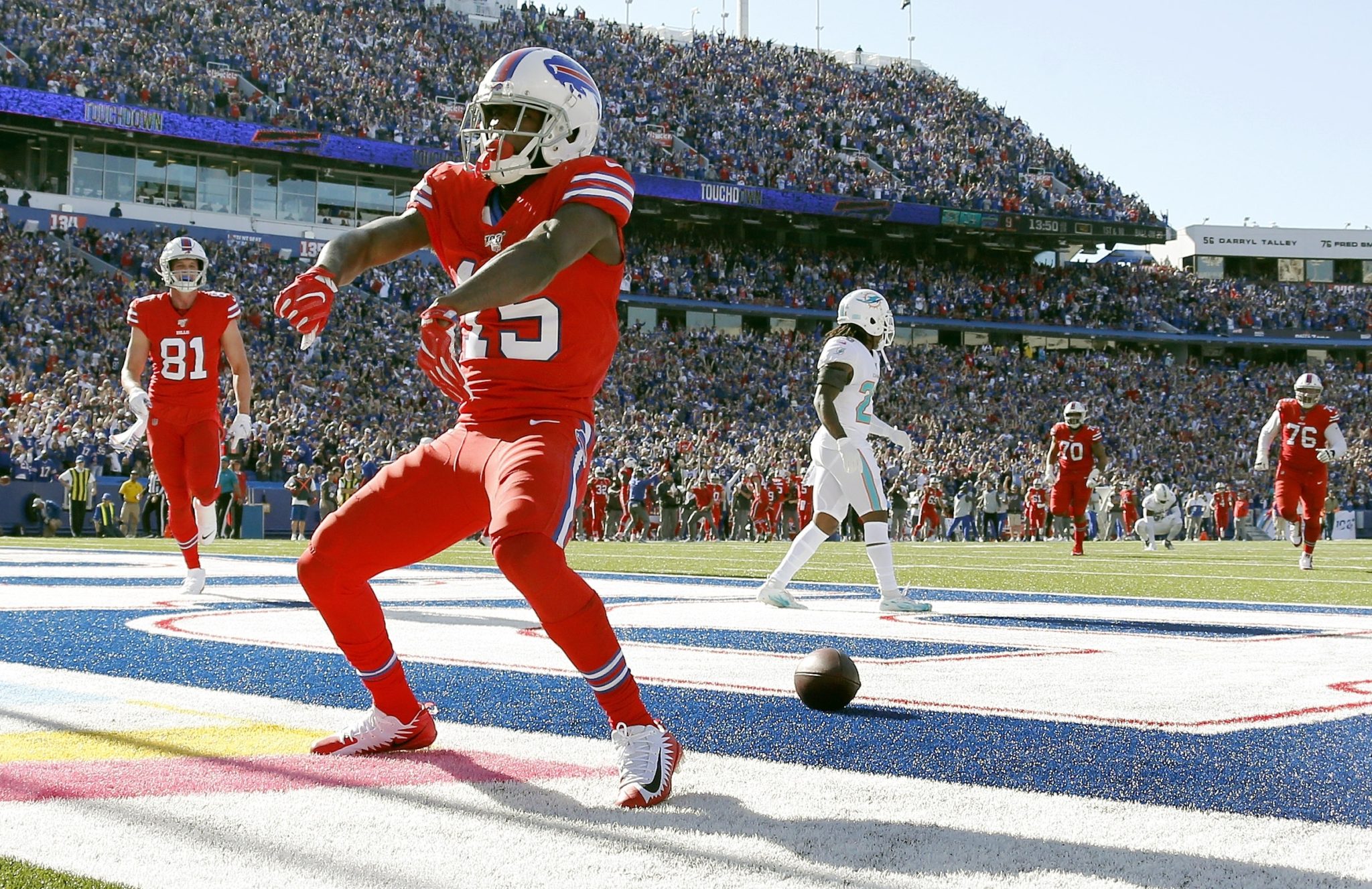 Tre’Davious White forced two second-half turnovers, Micah Hyde returned an onside kick for a touchdown, and the Buffalo Bills rallied from a five-point deficit for a 31-21 victory over the winless Miami Dolphins on Sunday.

The Bills, who began the day favored by 17 points, avoided what would have been a major upset against a patchwork Dolphins opponent in a major rebuilding mode.

Josh Allen led fourth-quarter touchdown drives following each of the Dolphins turnovers, and the Bills improved to 5-1 in matching their best start to a season in 11 years.

White’s diving interception at the 2 of Ryan Fitzpatrick’s pass on second-and-goal from the 12 led to Buffalo going ahead 17-14 on John Brown’s 20-yard touchdown catch that capped a 12-play, 98-yard drive.

Two series later, White punched the ball out of the hands of rookie Preston Williams near the Miami 30, and the fumble was recovered by defensive end Jerry Hughes. Three plays later, Allen hit a wide-open Cole Beasley for a 3-yard touchdown.


The outcome wasn’t decided until 1:38 remaining, and after Fitzpatrick scored on an 11-yard touchdown run to cut Buffalo’s lead to 24-21.

Dolphins kicker Jason Sanders’ onside kick attempt to the right bounced directly into a leaping Hyde’s arms. He stayed on his feet and returned it untouched to seal the victory.

Fitzpatrick provided the Dolphins a spark — and their first lead beyond the first quarter of the season — by engineering consecutive 75-yard touchdown drives.

Kalen Ballage put Miami up 7-6 by scoring on a 3-yard run on the first snap of the second quarter. And then Fitzpatrick hit DeVante Parker for a 12-yard touchdown catch with 5:51 remaining in the half.

The Dolphins entered the game having led only once in a game, and never past the end of the first quarter this season.

But the “FitzMagic” ran out in the second half against one of his seven former teams.

Buffalo overcame a sloppy first half in which the team appeared as if it was still knocking off the rust in coming off its bye week. The Allen-led offense settled for three field goals on its first three drives.

White’s interception came two plays after the Dolphins successfully ran a fake field goal on fourth-and-1 from the Buffalo 4. Holder Matt Haack caught the snap and then scampered for a 2-yard gain.

The Bills defense finally responded on the next play with former Dolphins defensive tackle Jordan Phillips crashing over the line and sacking Fitzpatrick for a 10-yard loss.

Dolphins defensive tackle Christian Wilkins was ejected for throwing a punch at Buffalo Bills tackle Cody Ford on the second snap from scrimmage.

Wilkins was penalized for unsportsmanlike conduct for throwing the punch away from the play and after Allen threw an incompletion.

Tight end Tyler Kroft was not targeted in making his long-awaited Bills debut after being sidelined by several injuries since signing with Buffalo in free agency in March. Kroft missed the entire offseason after breaking his right foot in his first practice. He then missed the past three games after hurting his left ankle in practice.